Women are being let down by the Government’s ‘glacial’ progress on making workplaces menopause-friendly, MPs warn

By Shaun Wooller Health Editor For The Daily Mail

Women are being let down by the government’s ‘glacial’ progress in making England’s workplaces menopause-friendly, MPs warn.

A report by the Women and Equalities Committee had called for urgent action to prevent vast numbers of talented menopausal women quitting their jobs.

But ministers have sparked fury by rejecting five of its recommendations outright in a response that was received three and a half months late.

This includes the recommendation to consult on making menopause a protected characteristic under the Equality Act 2010 and to pilot a specific menopause leave policy.

A report by the Women and Equalities Committee had called for urgent action to prevent vast numbers of talented menopausal women quitting their jobs. But ministers have sparked fury by rejecting five of its recommendations outright in a response that was received three and a half months late 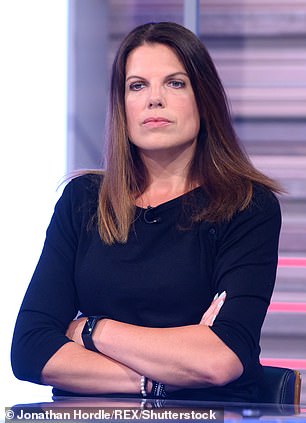 In a letter to health minister Maria Caulfield, the Chair of the Committee Caroline Nokes (pictured) expressed concern that the Government has ‘ignored the significant evidence base’ for equality law reform and called on it to review its position

WHAT IS THE MENOPAUSE?

Menopause is when a woman stops having periods, and is no longer able to get pregnant naturally.

It usually happens between the ages of 45 and 55.

It is a normal part of ageing and caused by levels of the sex hormone oestrogen dropping.

Some women go through this time with few, if any, symptoms.

Others suffer from hot flushes, sleeping difficulties, mood swings and brain fog, which can last for months or years and might change over time.

HRT replaces the hormones and is the main treatment used to treat symptoms — which can be severe and disrupt day-to-day life.

Menopause happens when your ovaries stop producing as much of the hormone oestrogen and no longer release an egg each month.

In a letter to health minister Maria Caulfield, the Chair of the Committee Caroline Nokes expressed concern that the Government has ‘ignored the significant evidence base’ for equality law reform and called on it to review its position.

The Committee also highlights the ‘low cost but high impact’ of menopause-friendly workplace policies and menopause leave, which the Government has dismissed.

In the letter, the Committee said it is ‘extremely disappointing that the Menopause Taskforce has not met since prior to the summer recess, and that the industry roundtable on HRT supplies has been delayed a number of times’.

The Committee’s report, published in July 2022, argued that the overlooked impact of menopause is causing the UK economy to ‘haemorrhage talent’.

It argued that the current law does not sufficiently protect women experiencing menopause and does not offer proper redress to those who suffer menopause related discrimination.

Many women instead have to demonstrate than their menopausal symptoms amount to a disability.

Though the Government said it has accepted, partly accepted or accepted in principle six of the recommendations, it comes under criticism from the Committee for not actually committing to any new work in response to the report.

Tory MP Miss Nokes said: ‘This belated response to our report is a missed opportunity to protect vast numbers of talented and experienced women from leaving the workforce, and leaves me unconvinced that menopause is a Government priority.

‘For too long women have faced stigma, shame and dismissive attitudes when it comes to menopause.

‘The evidence to our inquiry was crystal clear that urgent action was needed across healthcare and work settings to properly address women’s needs, yet Government progress has been glacial and its response complacent.

‘Its refusal to even consult on reforming equalities law doesn’t make sense and we urge it to look again.’

The average age of menopause is 51, with perimenopause often starting years earlier.

With 4.5million women aged 50-64 currently in employment, the report emphasises the scale of the problem facing ‘individuals, the economy and society’.

The original report said: ‘Women of menopausal age are the fastest growing group in the workforce and are staying in work for longer than ever before.

‘As a result, some cut back their hours or responsibilities. Others leave work altogether.

‘We call on the Government to lead the way for businesses by appointing a Menopause Ambassador who will champion good practice.’

A government spokesperson said: ‘We recognise that the menopause can be a challenging time for women, which is why we have put women’s health at the top of the agenda as part of the first-ever Women’s Health Strategy for England.

‘We are implementing an ambitious programme of work with the NHS to improve menopause care so all women can access the support they need.

‘We encourage employers to be compassionate and flexible to the needs of their employees, and are committed to supporting more flexible working patterns – having consulted on making flexible working the default unless employers have good reasons not to.’