Portland, Oregon is truly a beautiful city with an abundance of parks and gardens. It would be impossible to take in all the beauty that Portland has to offer in one trip. Plus, they are home to more breweries than any other city in America and home to unique restaurants and attractions. So, it becomes even more impossible to decide what to see and what to skip.

Here at 10 Best, we know there are certain things that just simply should not be skipped and that is why we have created a list of the top ten sights to see in Portland. Our list will take the guesswork out of it.

A visitor to the city must take in some of the lavish outdoor attractions. We included the International Test Rose Garden because it will trump any other rose garden you’ve likely seen and deserves to be #1 on any list during the warm months. Then there is Multnomah Falls, which in our opinion is a must see despite the drive. The Japanese Garden also makes our list, because it is simply stunning, especially in the fall.

Where ever you decide to visit we hope this list helps you plan your next trip to Portland.

Majestic and much-photographed, this Columbia River Gorge attraction is one of Oregon’s biggest draws. Hiking trails lead up the face of the mountain, and a bridge crossing the waterfall offers an impressive vantage point. Standing in front of the falls can be quite romantic. Legend has it that the falls were created to honor an Indian chieftain’s daughter, who threw herself from the precipice to appease the gods and relieve the sickness that plagued her tribe. No matter its origin, visitors are constantly awed by the spectacle. The nearby Multnomah Falls Lodge provides refreshment and a resting place for weary hikers.

Recommended for Sightseeing because: Multnomah Falls is stunning and worth the drive if you are in Portland.

Meagan’s expert tip: Visit during the week to avoid crowds. 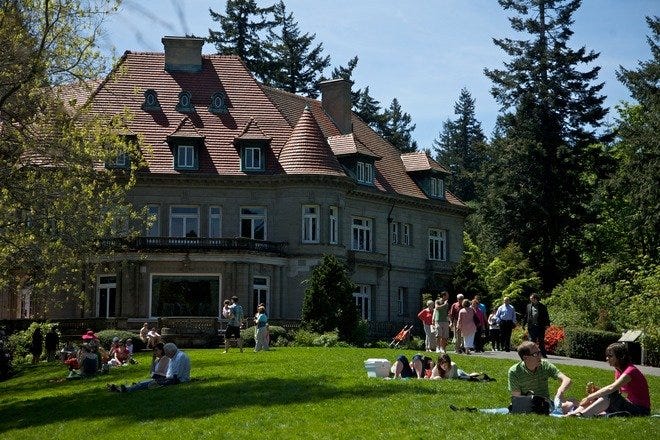 Built for Henry and Georgiana Pittock (who lived in the house from 1914 to 1918), the Pittock Mansion is a stunning architectural specimen and a repository for elegant furnishings. Pittock Mansion has 22 rooms and the gardens outside have stunning views of Portland and Mt. Hood. It was eventually purchased by the state and opened to the public in 1965.

Henry remains a Portland icon, well-known for his involvement with the local paper, The Oregonian. Georgiana was a major player in community projects and initiated the renowned Rose Festival. House tours provide insight into the life of the wealthy in Portland’s early days.

Recommended for Sightseeing because: Pittock Mansion is Portland’s most famous house and provides insight into Portland’s history.

Meagan’s expert tip: Visit around Christmas time to delight in the decorations. 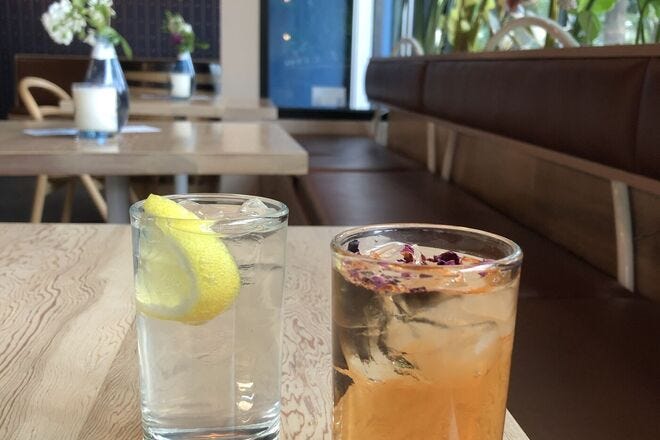 Freeland Spirits crafts artisanal gin and whiskey in small batches at their Portland, Oregon distillery. Northwest grains and botanicals bring regional flavors through the still and into each glass.

They use a unique blend of traditional heat distillation along with vacuum distillation, which allows them to use fresh, Pacific Northwest ingredients. They have a beautiful tasting room where you can enjoy high-quality spirits using ingredients that support local agriculture. You will enjoy fresh herbal essences of rosemary, mint, and crisp cucumber lift the nose. Grapefruit and lemon peel brighten the brisk juniper and bold spice. Pink peppercorn, coriander, and star anise mingle with 10 additional dried botanicals in the copper pot still.

Recommended for Sightseeing because: Freeland Spirits has a beautiful tasting room and one of few women-owned and operated distilleries in history.

Meagan’s expert tip: To try a little bit of everything order the “Whole Lineup” which consists of Gin, Dry Gin, Geneva, Bourbon, Gin & Rose Tonic Cocktail, and the French 75 Cocktail. 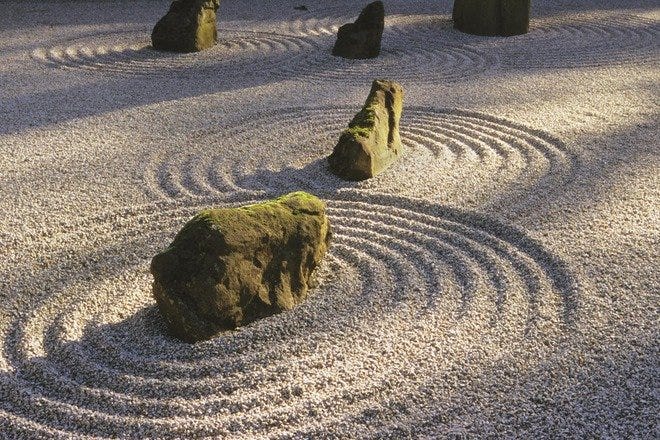 One of the many attractions in Washington Park, the Japanese Gardens is one of Portland’s brightest gems. Designed by renowned landscape architect Professor Takuma Tono, the site opened in 1967. Five separate gardens comprise this collective: Strolling Pond, Tea, Natural, Flat and Dry Landscape. Each one offers a unique environment and design comprised of elements such as water, stone, and vegetation.

The garden’s elevated location in Portland’s West Hills offers a quiet escape above the city. The Japanese Garden is always lovely, but in the fall it is stunning. There is an admission fee to get in and be sure to get there early enough to spend at least an hour and a half.

Recommended for Sightseeing because: The Japanese Garden is beautiful and designed by Professor Takuma Tono.

Meagan’s expert tip: The maple tree is one of Portland’s favorite photographic subjects. 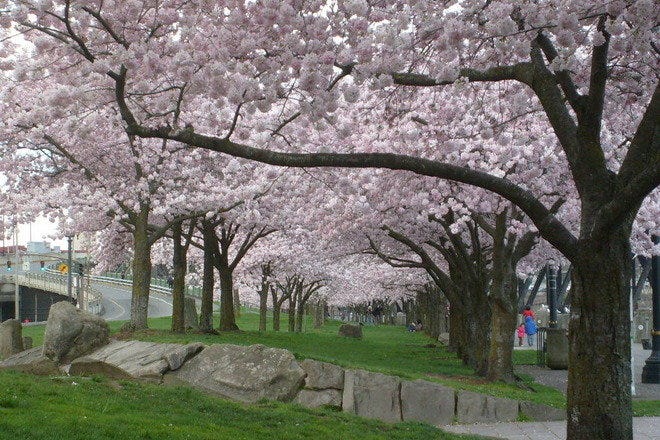 Although Pioneer Courthouse Square and Powell’s Books are often referred to as Portland’s “living rooms,” Tom McCall Park could also be named as such. Even in bad weather, a multitude of people congregate along the riverfront, and on nice days, families, bikers, bladers, and joggers all find a way to coexist peacefully. The park is also the site of many of the city’s big events, including the Blues Festival, the Oregon Brewers Festival, and many events associated with the Rose Festival. It was under Governor McCall’s leadership that Harbor Drive was demolished and replaced by this park in the mid-1970s.

Meagan’s expert tip: Visit on a Saturday to enjoy the Saturday Market and don’t forget bathing suits for the kids. 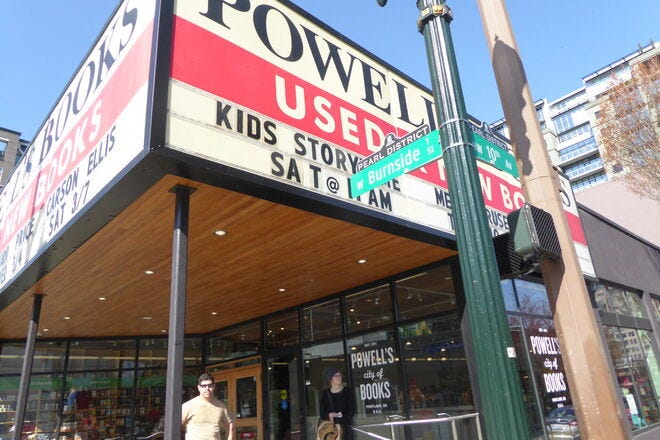 Housed in a five-story building that occupies an entire city block, calling Powell’s a “City of Books” is hardly hyperbole. By far the most significant book store in Portland, Powell’s claims to be the largest independent book store in the nation. Ever been to The Strand in New York? Powell’s is bigger.

Selling new and used books, shoppers will be able to find pretty much anything in print at a great price. With 1.6 acres of floor space, shoppers may have to use a map (free at the front desk) to navigate through the many color-coded rooms.

Powell’s coffee shop is one of the best places in Portland to bring out-of-town guests for an afternoon snack. Aside from the “City of Books” Powell’s has several satellite locations throughout the Portland area, including three at the airport. Online, Powell’s Books competes head to head with Amazon.

Recommended for Sightseeing because: Powell’s Books is the largest independent book store in the U.S.

Meagan’s expert tip: Check out the Rare Book Room on the 5th floor. 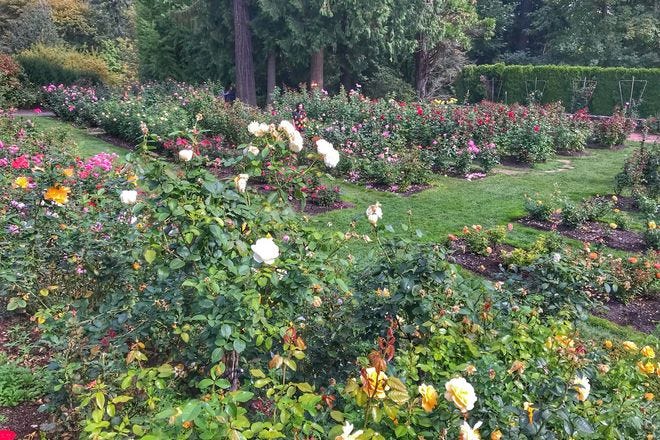 Not only will you see roses that you’ve never seen before here, but you will also have an incredible view of the city and Mt. Hood from these terraced gardens.

Instituted in 1917, the gardens give trial runs to various rose hybrids before they’re introduced into the mass market. With over 8000 plants representing more than 400 different species, this garden is sure to have at least one rose type that captivates you. Should you find yourself tempted, however, know that it’s illegal to pick any of the blooms.

Summer is the best time to visit the displays and is also when you’ll find a repertoire of seasonal concerts available in the gardens. The Washington Park Rose Garden Store offers unusual items for both the home and garden.

Recommended for Sightseeing because: The International Rose Test Garden is breathtaking and should be a must when visiting Portland.

Meagan’s expert tip: Visit between June and August if possible. Do not pick any of the roses. 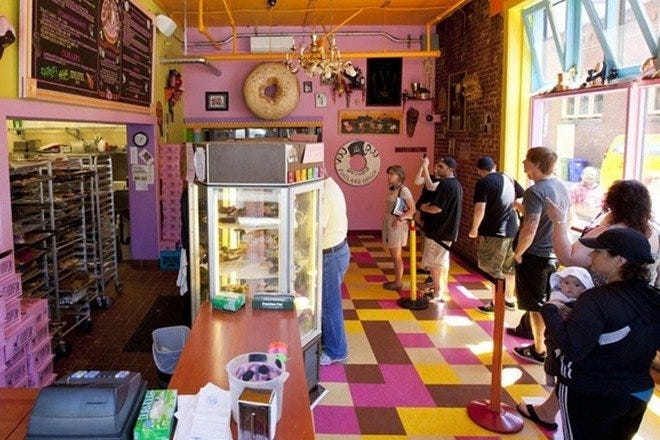 Photo courtesy of By Rock-O-Billy for Voodoo Doughnut

Voodoo Doughnuts serves doughnut creations unlike anywhere else, because where else can you find a bacon maple bar, a chocolate donut slathered with peanut butter and topped with crushed Oreos, an apple fritter “as big as your head”, or buy a coffin filled with donuts. (Coffins by special request only.) You can even get married while your guests are chowing down on a sweet, yeasty treat.

Voodoo Doughnut is the talk of the town and indeed, the world and thanks to an eclectic blend of flavors and toppings, a selection of vegan doughnuts, and yes, the benefit of legal weddings performed by ordained ministers.

Recommended for Sightseeing because: Voodoo Doughnuts is one of a kind and you can not visit Portland without stopping by.

Meagan’s expert tip: Be prepared to stand in line, but know it moves fast. 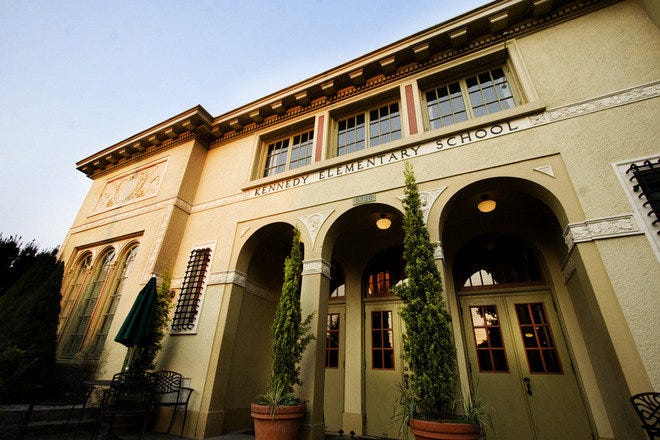 Built back in 1915, this architecturally beautiful structure served generations of students before being closed in 1980. Following a series of renovations by the McMenamin brothers, it reopened as a neighborhood entertainment facility. These days, it houses a 35-room bed and breakfast, restaurant, several bars, and a gift shop. Have a bite to eat in the Courtyard Restaurant, sample your favorite vintage in the Cypress Room, or hang out in either the Honors Bar or the Detention Bar, depending on your attitude and inclination. Given the particular venue, you’ll find local beers, single-malt scotches, espressos, and character galore. Hallways are filled with unique artwork, and the courtyard gains great appeal when the weather’s nice.

Recommended for Sightseeing because: Kennedy School was built in 1915 and McMenamins has done an excellent job turning it into a one-of-a-kind multipurpose facility.

Meagan’s expert tip: Plan on touring the property and having a meal here. 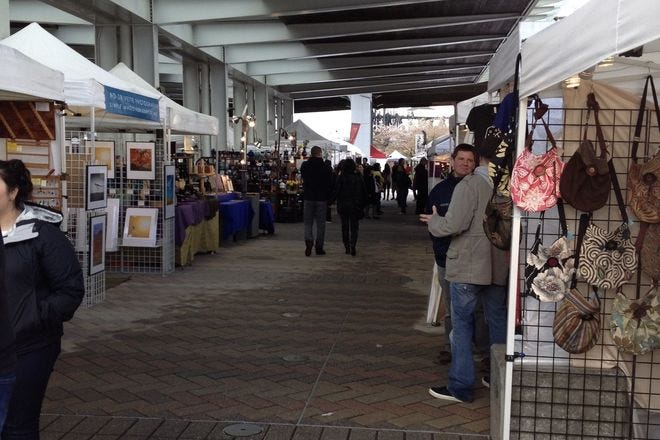 Despite its name, the Portland Saturday Market is open on Sundays too, every weekend from March through December. Located on the West Bank of the Willamette River, the Market is sheltered by the Burnside Bridge and a glass-roofed structure custom made for open-air shopping on rainy days. Scores of vendors sell their art and crafts, all original creations, unavailable anywhere else. All sellers at the Saturday Market only sell that which they fashion themselves. This includes the freshly cooked, international food which shoppers can eat while sitting in front of the stage featuring free, live music every market day.

Buskers throughout the area round out the entertainment.

Recommended for Sightseeing because: Portland Saturday Market is a way to see some of the best of what Portland has to offer all handmade.

Meagan’s expert tip: Come early on summer mornings, as the market can get very crowded in the afternoon.