After lying low during the past few years, thrill seekers are eager to get out adventuring again, and there may be no better time to do so than in 2022. A number of amusement parks will be debuting new rides and attractions, including SeaWorld, which has 11 launching in their various U.S. parks – the largest number ever introduced in a single year by the company. This includes the opening of Sesame Place, a brand new family-oriented park opening in San Diego.

“We have an ambitious goal of creating something new and meaningful in every one of our parks,” says SeaWorld Chief Executive Officer Marc Swanson. “These new rides and attractions are part of that commitment and as we look ahead to 2022, we have what we believe is our most significant and exciting lineup in our history.”

Here’s a peek at what coaster and park lovers can expect at SeaWorld-owned properties in the year ahead.

Thrill seekers can finally board the long-awaited Ice Breaker in early 2022, after waiting out delays and pandemic shutdowns for nearly two years (it was originally scheduled to open in 2020). Featuring the steepest vertical drop in Florida with both forward and backward launches, the new coaster culminates in a reverse launch into a 93-foot-tall spike with a 100-degree angle.

The addition of Ice Breaker makes SeaWorld Orlando home to the most coasters of any theme park in the city. And that’s saying a lot in Orlando. 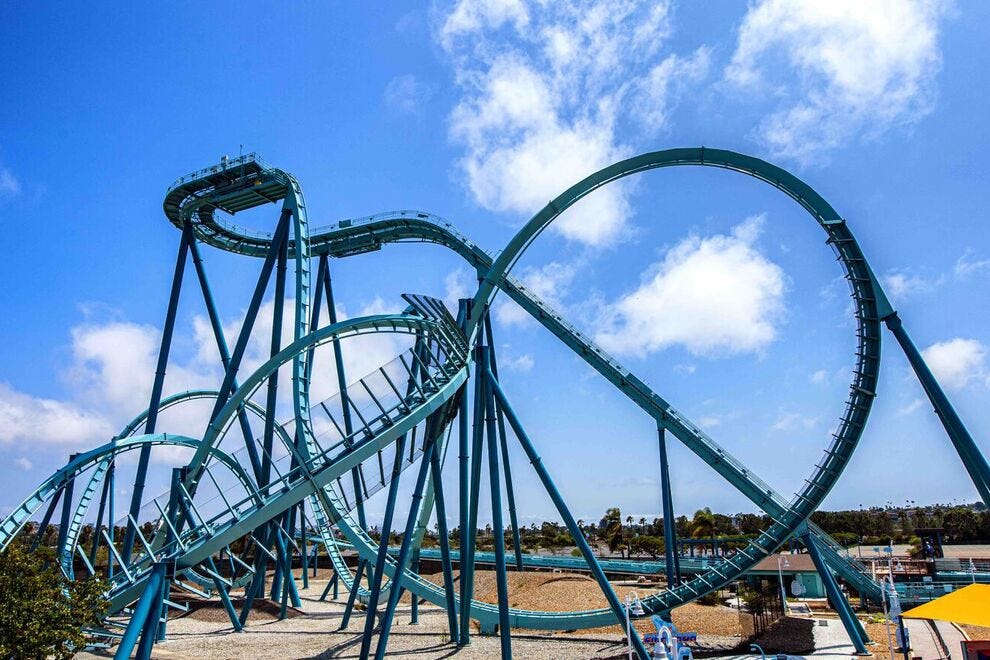 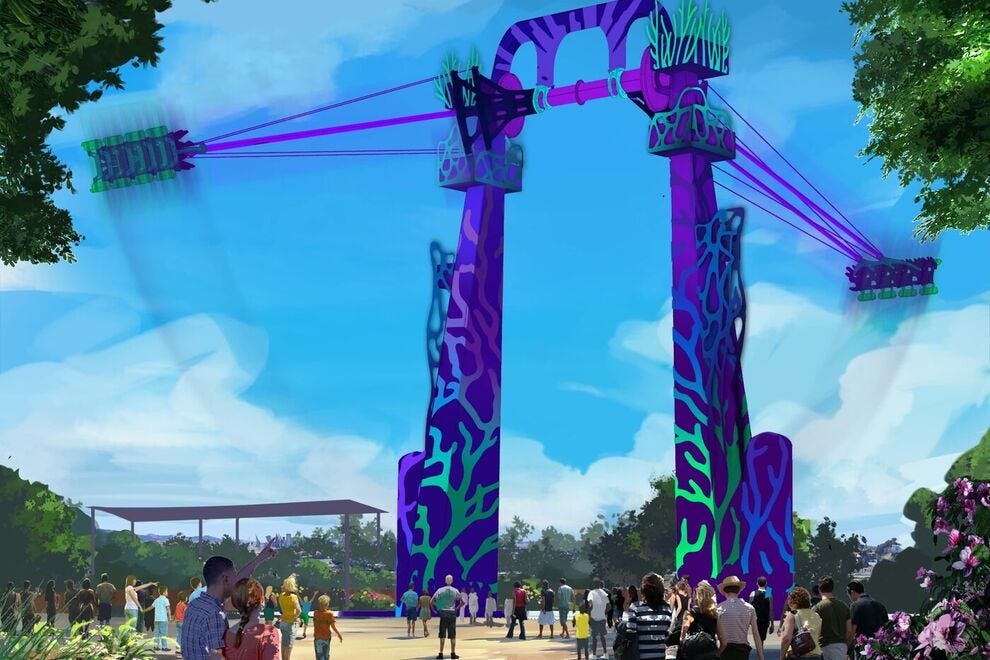 Opening in spring, SeaWorld San Antonio’s Tidal Surge will be the world’s tallest and fastest screaming swing, sending 40 riders higher and higher as it swings on two pendulum-like arms. After building progressive momentum, it will fly to a staggering height of 135 feet and 68 mph at its peak, creating a number of airtime experiences and reaching multiple negative G moments. Get the Dramamine ready! 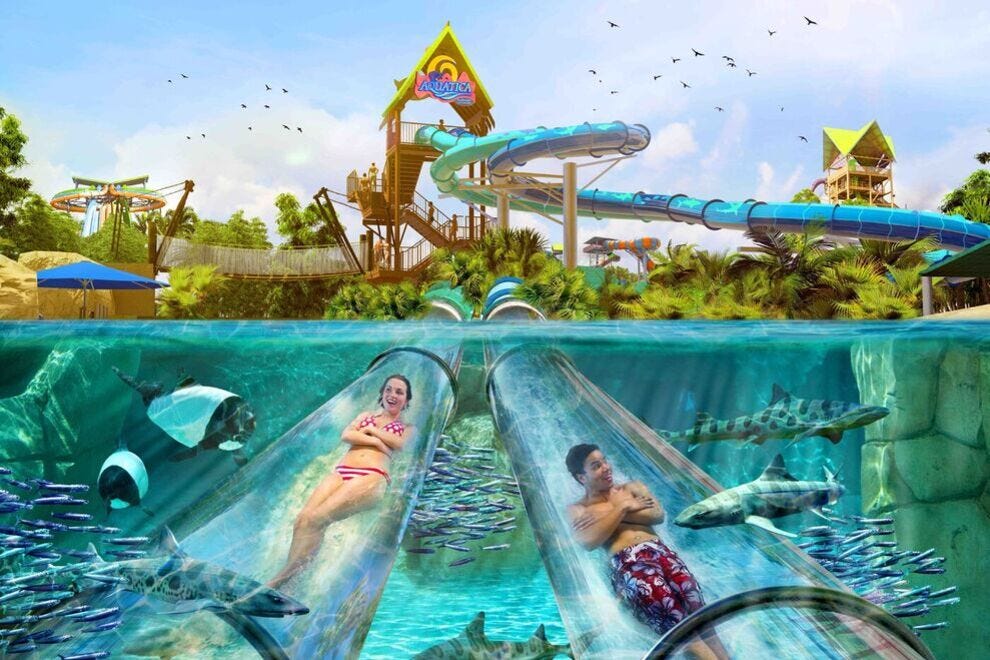 Tighten your goggles if you want to see your way through the new Reef Plunge that sends guests on a splashing and twisting adventure through more than 330 feet of eye-catching translucent cutouts and rings.

Opening in spring at Aquatica Orlando, guests will zoom past a dynamic new underwater habitat that is home to a vibrant array of marine life, including Commerson’s dolphins, leopard sharks, sardines and other cold-water fish. 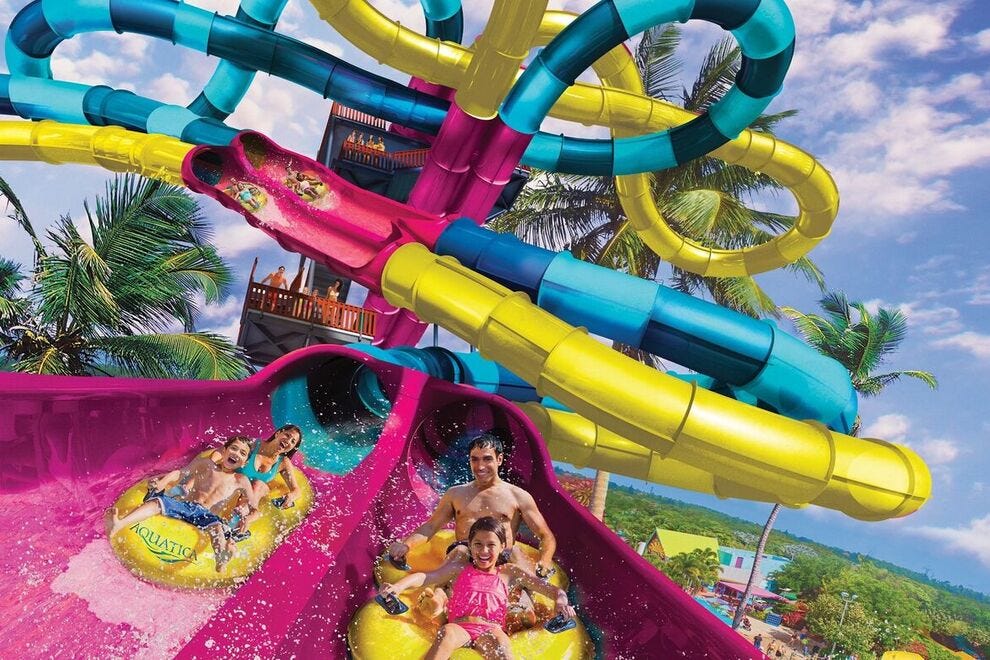 On your mark, get set, race! On the new Riptide Race – part racer, part waterslide – teams are pitted against each other in a race to the finish on the world’s tallest dueling racer. Guests climb into a two-person raft at the top of a 51-foot tower before flying down the 565-foot slide, side by side with their drenched competitors. 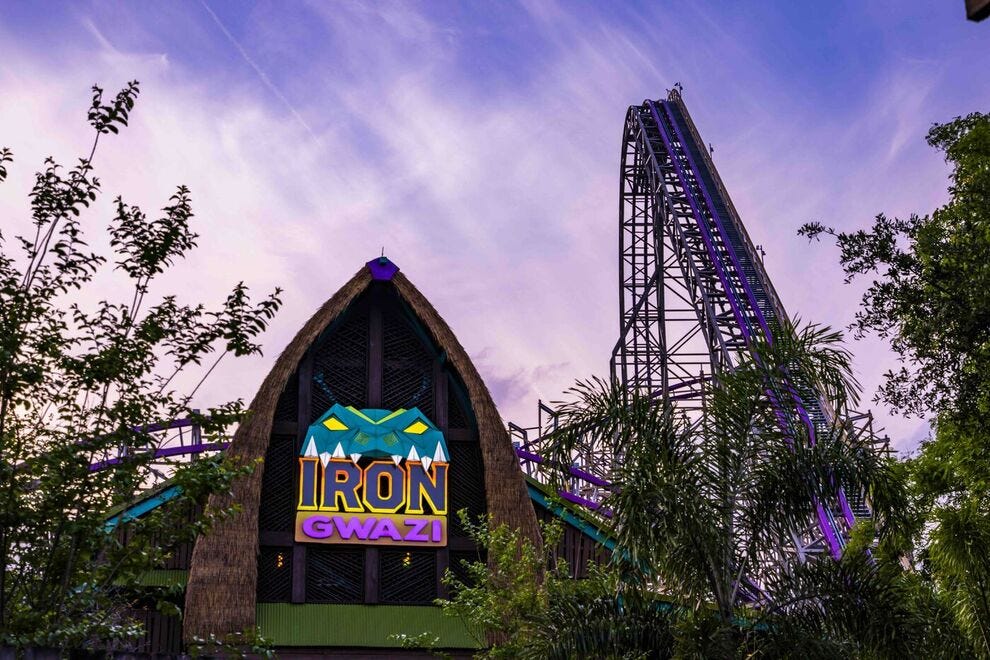 Just in time for spring breakers flocking to Florida, Busch Gardens Tampa Bay will debut North America’s tallest hybrid coaster – with a wood and steel hybrid design – and the fastest and steepest hybrid in the world.

Iron Gwazi will take daredevils to new heights, plunging from a 206-foot-tall peak into a 91-degree drop at speeds topping 76 miles per hour. There are a dozen potential airtime moments, including three inversions, and an exponential number of potential scream-inducing opportunities. 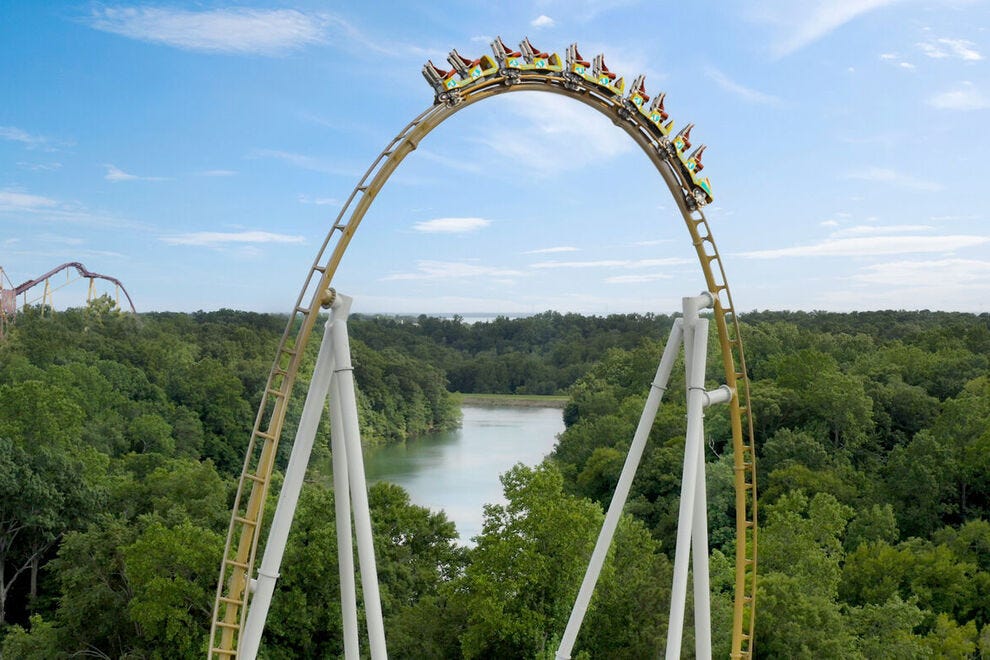 Starting in March, the Pantheon roller coaster will harness the speed and strength of five of the greatest Roman gods, topping 73 mph. The coaster will feature a 95-degree, 180-foot drop, four launches, five air-time moments and two inversions that add up to it being the world’s fastest multi-launch coaster.

The all-new, highly anticipated coaster will open in the park’s Festa Italia village, and will bring Busch Gardens Williamsburg’s total number of roller coasters to eight. 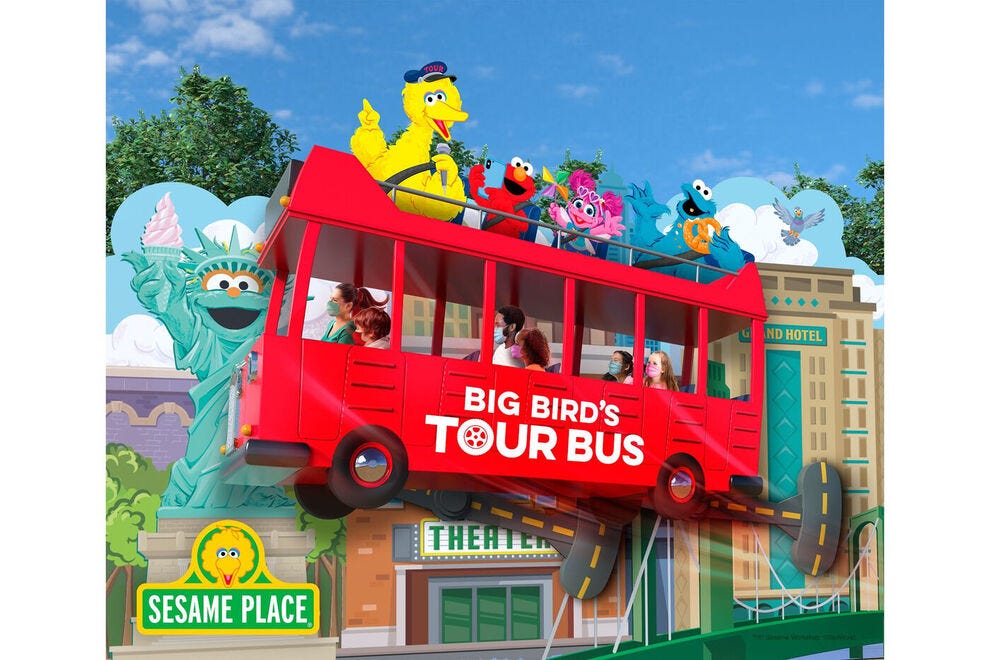 Little ones also want to have fun and Big Bird’s Tour Bus at Sesame Place Philadelphia will allow wee adventurers and their families to do just that starting in April. Guests board the red double-decker bus ride that surges around and around and up and down with Big Bird and his furry friends. 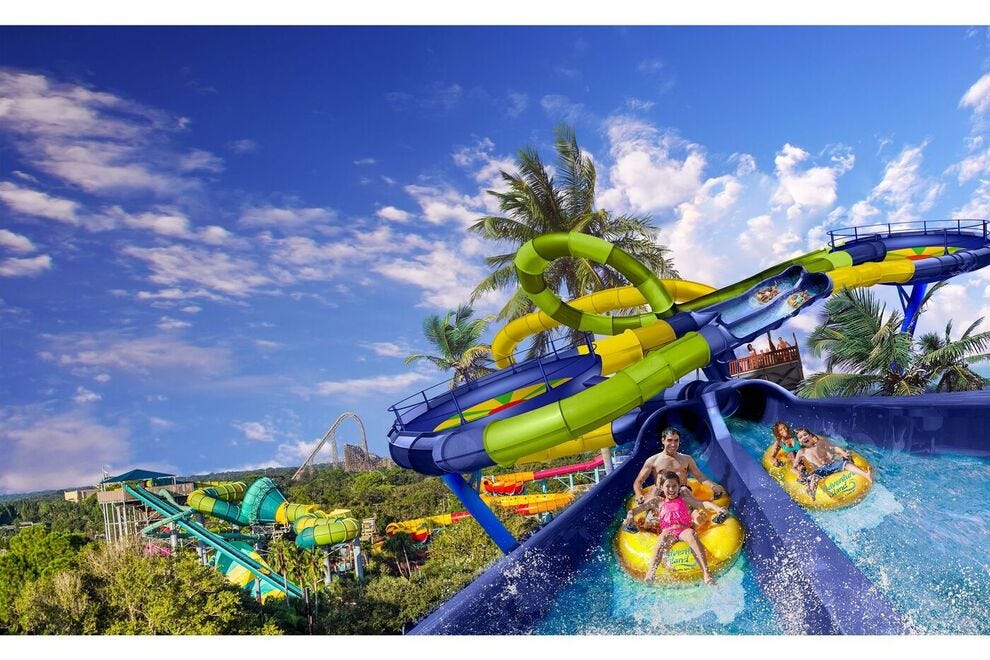 Two new attractions will splash down at Adventure Island in Tampa in 2022: Rapids Racer and Wahoo Remix. Rapids Racer, an all-new water slide, invites guests to compete against each other on a parallel track and features the world’s first dueling saucers.

Wahoo Remix (formerly Wahoo Run) will re-open as a high-energy water ride with synchronized light and sound elements, complete with a glow-light tunnel, providing families with the chance to raft down a 600-foot watery track. 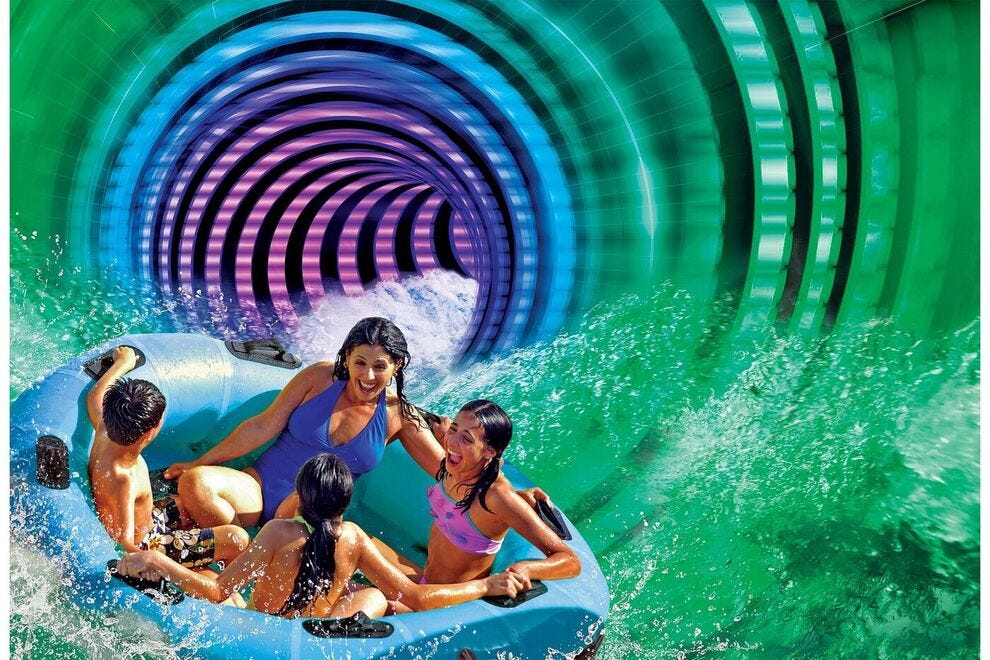 Aquazoid Amped, opening in May at Virginia’s largest water park, is a full sensory immersive ride that includes an all-new special effects show with pulse-pounding music and dynamic lighting effects. Riders plummet down 864 feet of fully-enclosed twisting tube at speeds of 20 feet per second. 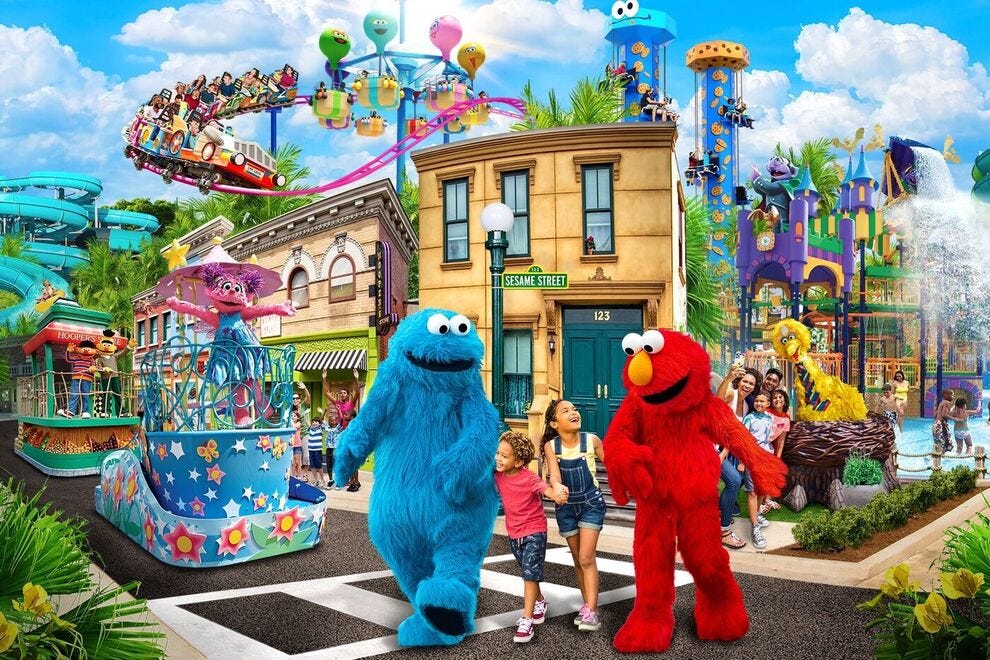 Oscar the Grouch may have trouble being grumpy when this new park opens in March. This new southern California location will feature live character shows, seven Sesame Street-themed rides, an interactive musical play area and 11 water attractions, including a 500,000 gallon wave pool.

Sesame Place will also be a Certified Autism Center with staff completing autism sensitivity and awareness training. There will also be autism-friendly resources available such as a sensory guide and designated quiet spaces.