19 of the most spectacular holiday lights in and around Orlando, Florida

With Disney World, Universal Studios and other family-friendly attractions, Orlando is among the most popular vacation spots in the United States. It’s an especially perfect spot to enjoy world-class holiday light displays.

From Christmas trees to high-tech sparkling displays of lights that are linked to everything from music to fire, there’s something to wow even the Grinch! See which of these Orlando light displays will make it to your ultimate holiday must-see list. 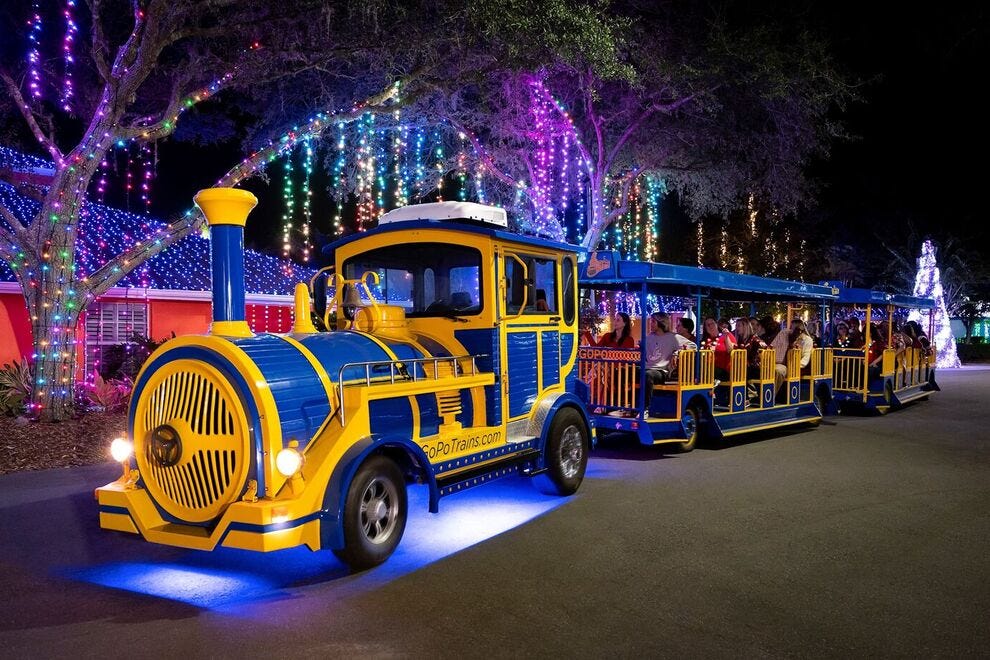 Photo courtesy of Give Kids the World

Night of a Million Lights at Give Kids the World Village

Running through January 2, 2022, the Night of a Million Lights at the Give Kids the World Village is a big, bright sight you need to see. It’s more than a light show; it’s an immersive experience.

There are dancing lights on 21 buildings that are coordinated with music to wow visitors with a show. It features a tram ride that takes guests through a storybook village and a holiday marketplace where children can meet Santa Claus. 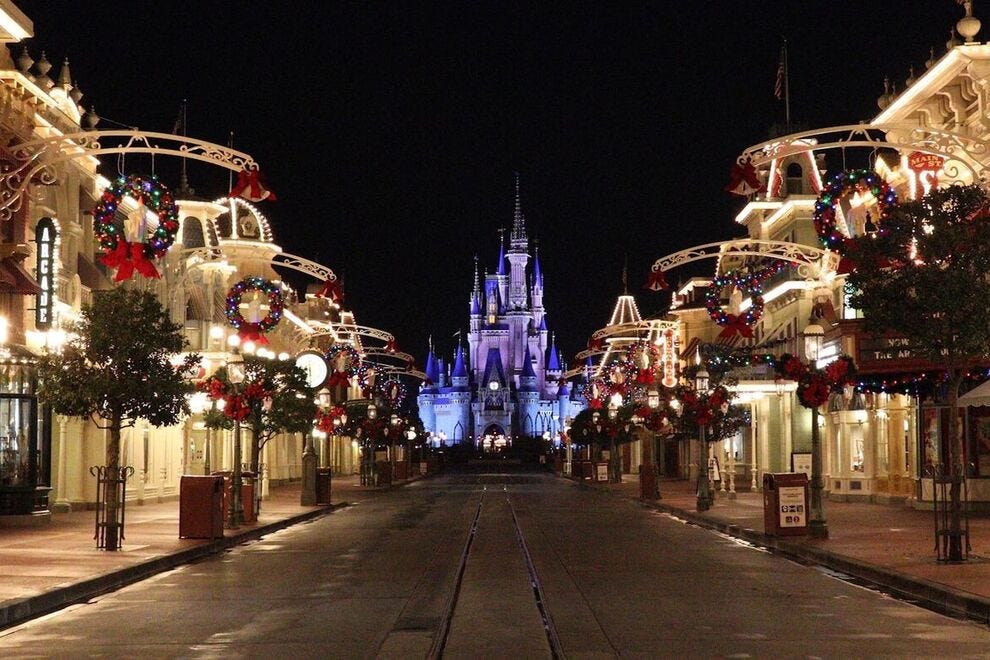 Special treats are served throughout the park, and they’re happy to accommodate vegans and those with special dietary needs. Children will delight in seeing Santa, Olaf from “Frozen” and other Disney characters during Mickey’s Once Upon a Christmastime parade. The big holiday party also includes Minnie’s Wonderful Christmastime Fireworks show. 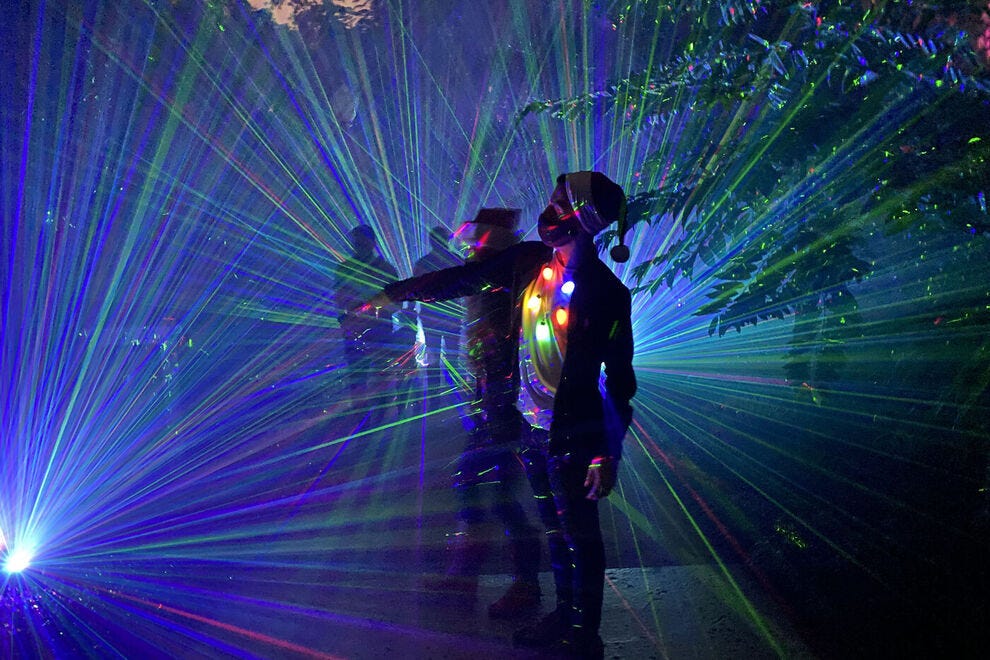 Now on display until January 9, 2022, the Creative City Project’s Dazzling Nights at Leu Gardens offers a fun night out for anyone. A new show debuted this year, and it offers a ¾-mile of entertaining lights. It has a huge light maze, a display with 185 gorgeous Moroccan lanterns and a forest of dancing lights.

The 50-acre Leu Gardens uses interactive elements to make the lights and music even more fun. 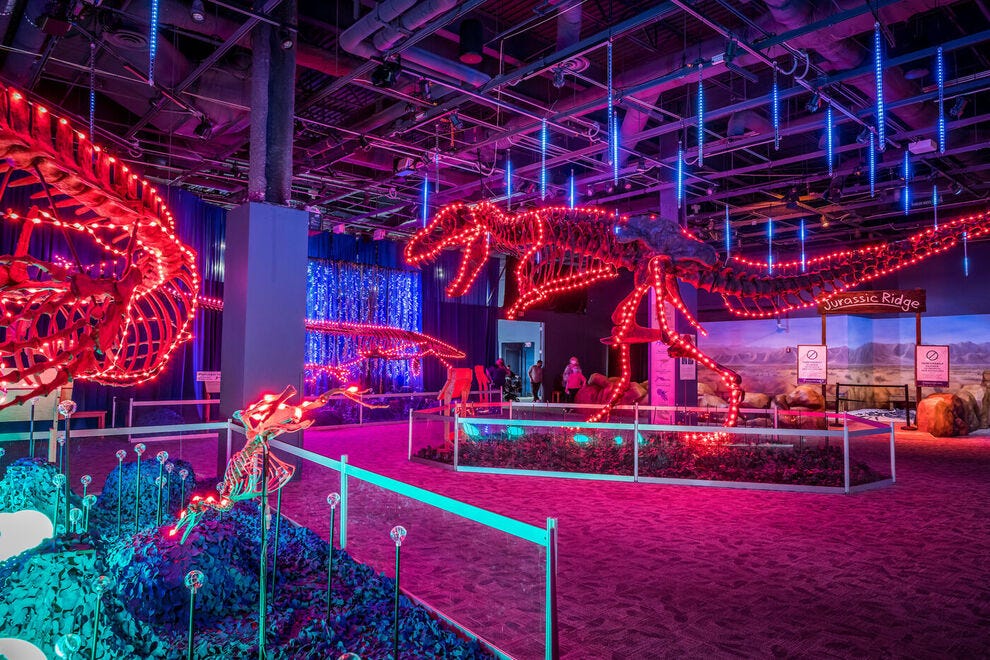 Dinosaurs, holiday music and sparkling lights, oh my! The Orlando Science Center is known for getting creative with its ideas that inspire a lasting love of science in children. It goes above and beyond with its Dino in Lights show.

This festive show with lights and music is worth seeing multiple times on your visit to the center. From now through January 4, the show will play every 30 minutes between 11 am and 3:30 pm on any day that the science center is open. 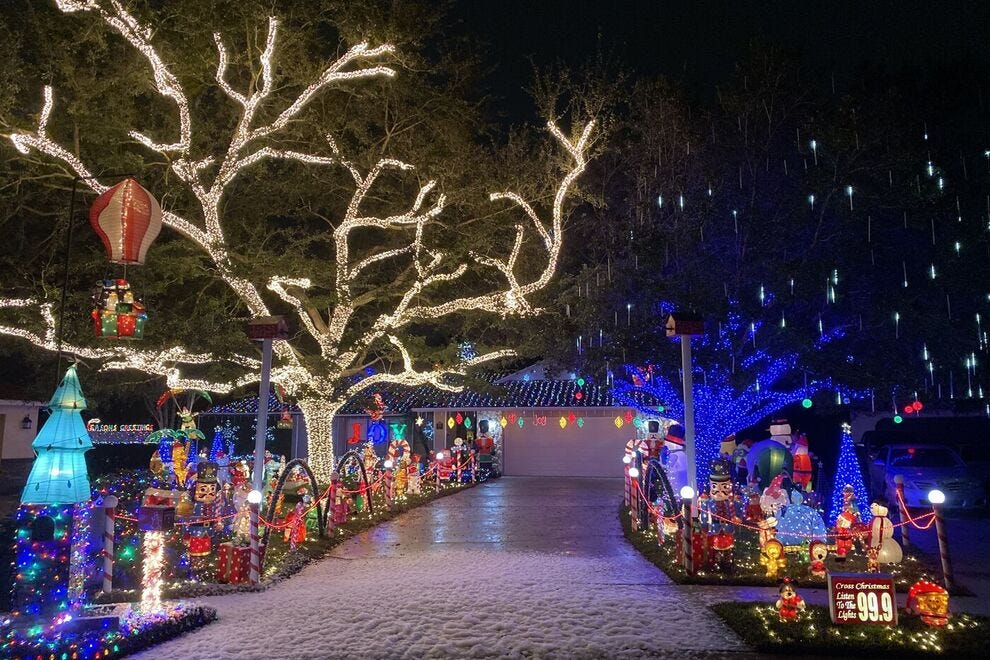 The Cross Christmas is an elaborate display at a private home at 4241 N. Econlockhatchee Trail in Orlando. The Cross family uses over 125,000 lights in their gorgeous and elaborate light show that has become an Orlando tradition for many local families.

The display includes a big oak tree that’s wrapped in white lights and synchronized to holiday tunes. They also have the special touch of snow flurries every 30 minutes between 6:30 pm to 10 pm. 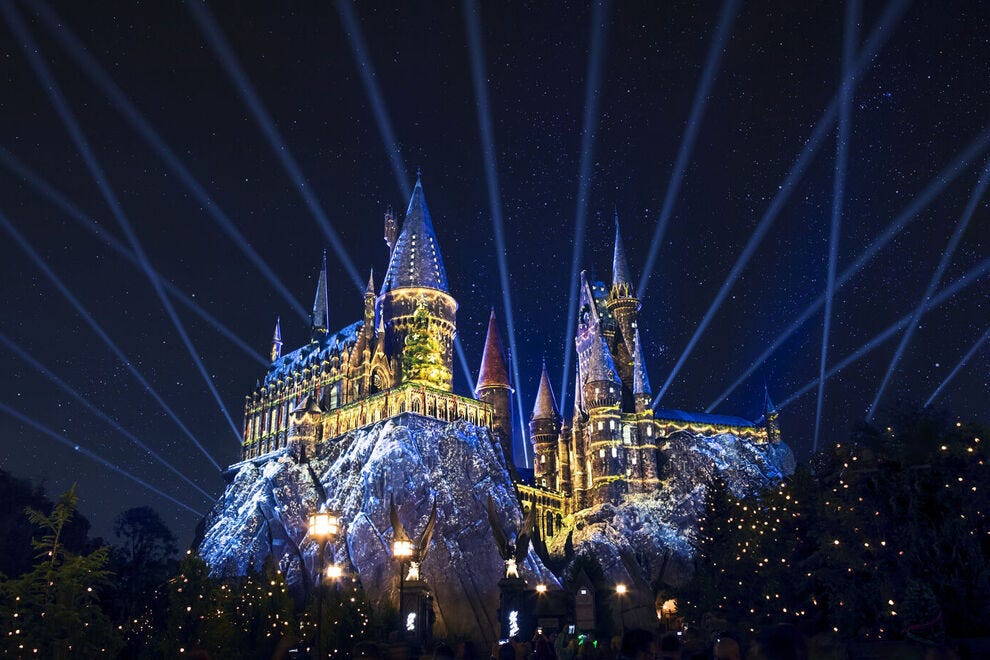 Celebration of Christmas in The Wizarding World of Harry Potter

Running daily through January 2, 2022, the Christmas celebration at The Wizarding World of Harry Potter at the Universal Orlando Resort is something very special. Not only does the Hogwarts castle illuminate with holiday lights, but the streets of Hogsmeade and Diagon Alley are both beautifully decorated for the season.

There’s something here for the most devoted Harry Potter fans, as well as those who vaguely know that he is a wizard. 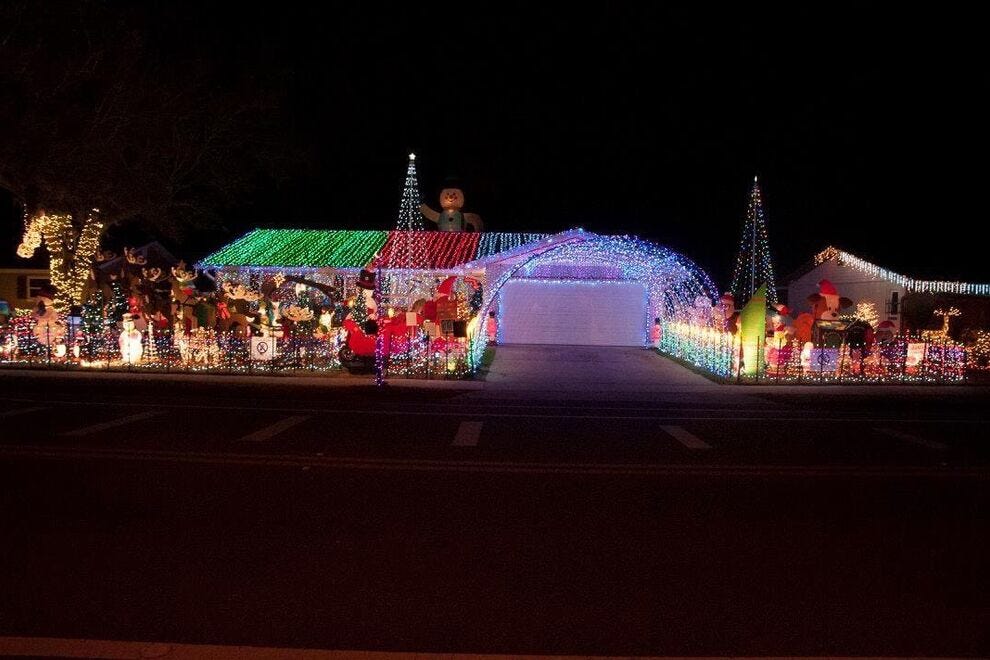 Prepare to smile when you spot the beautifully decorated Fye’s Crazy Christmas House at 407 Eagle Circle in Casselberry. This year, they have 60,000 lights within their displays. Visitors enjoy 24 arches that go over the driveway and two 20-foot-tall lighted Christmas trees.

The porch is fun with its more than 50 Christmas signs and an animated Santa Claus. Some lights flash in sync with music, illuminating other decorations like inflatables. Also, look for the giant star of Bethlehem that’s 35 feet in the air over the display. 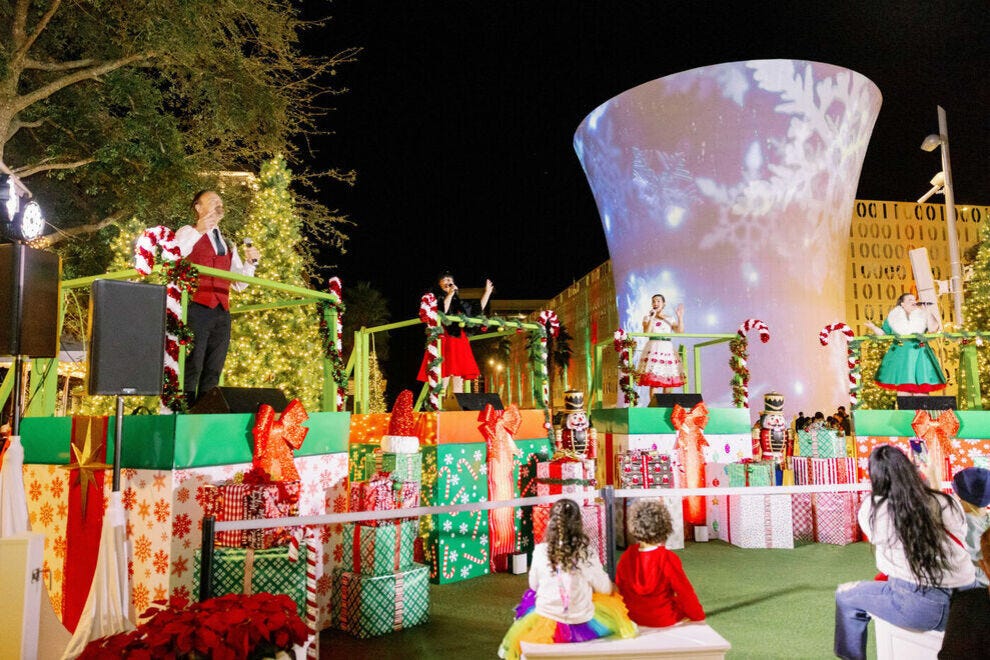 Stroll through the square to enjoy elaborately designed decorations and light displays. Visitors can take a selfie in front of the photo wall and can also visit Santa and Mrs. Claus at their decorated, whimsical cottage. 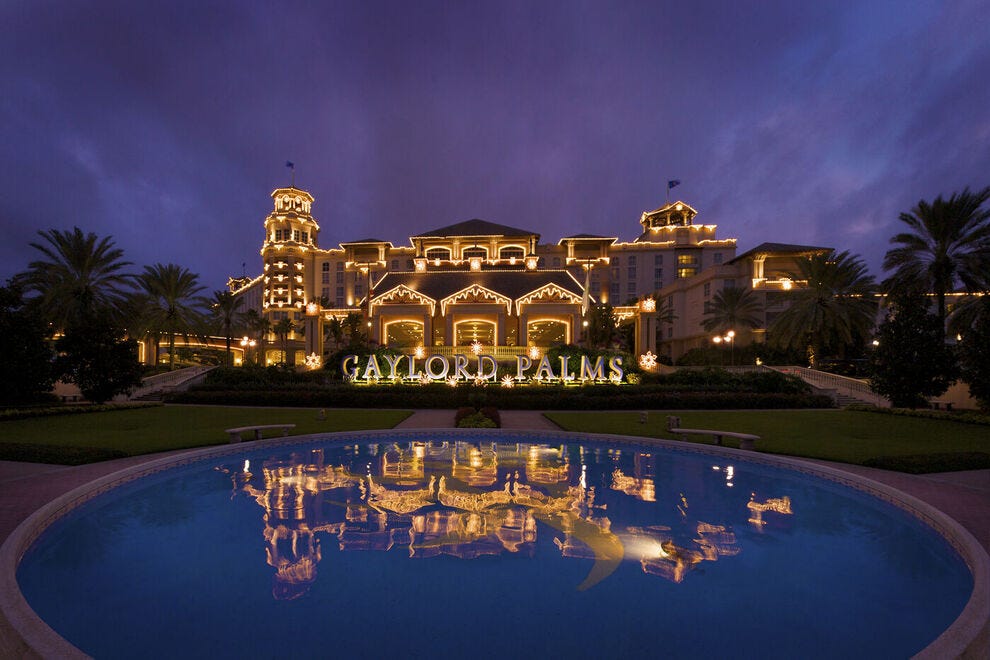 The holidays at the Gaylord Palms Resort & Convention Center are special every year, and they invite guests to experience “So. Much. Christmas.” which is now running through January 2, 2022.

More than three million holiday lights sparkle throughout the 64-acre resort. In fact, the exterior of the resort itself has 250,000 lights. On top of that, there are 100 lighted Christmas trees throughout the property, and some trees are suspended high above guests in the Everglades Atrium. 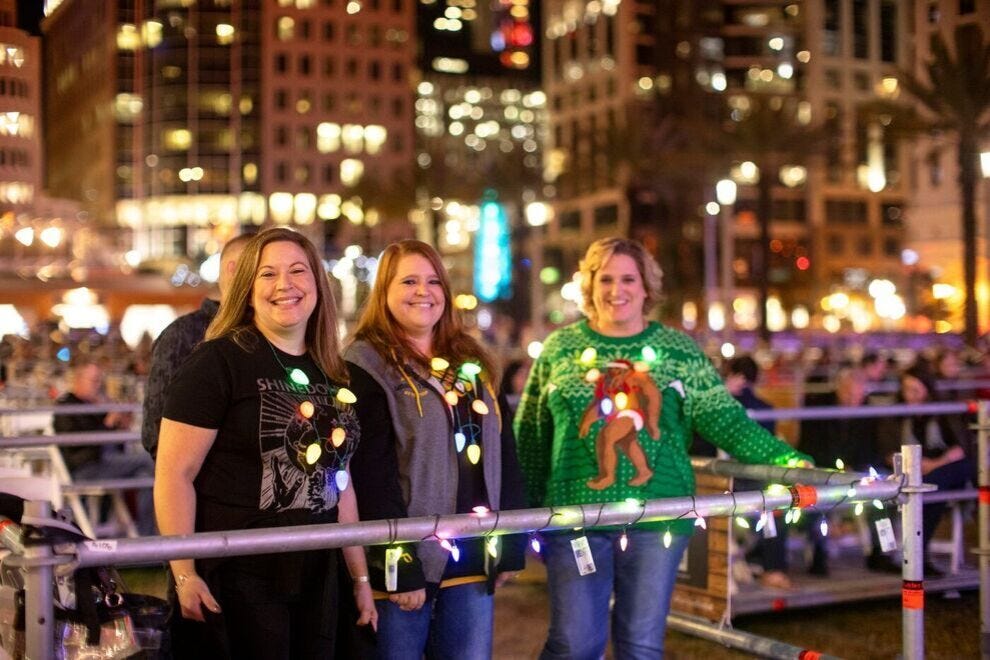 Photo courtesy of Dr. Phillips Center for the Performing Arts

A Spectacular Christmas at Dr. Phillips Center for the Performing Arts

The Dr. Phillips Center for the Performing Arts gets very festive with its Frontyard Festival now through mid-December. It will be presenting elaborate holiday shows like Songs of the Seasons and Big Bad Voodoo Daddy’s Wild & Swingin’ Holiday Party.

The center is also presenting other holiday shows beyond the festival such as “The Nutcracker,” including a performance that’s designed to be sensory-friendly and family-friendly. 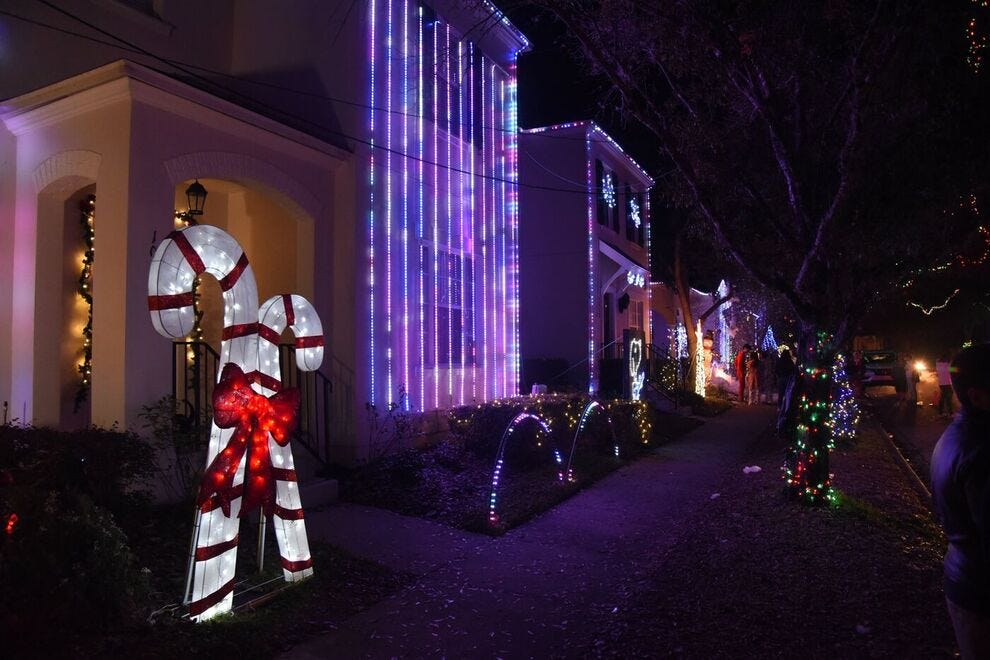 The Lights on Jeater Bend Drive

Located only minutes from Walt Disney World in Celebration, the Lights of Jeater Bend Drive is an elaborate display of Christmas lights. It’s the result of the hard work of 11 neighbors who come together to create this special experience for visitors each year.

The homes have lights that are synchronized to music, projection, fire and water. They recommend parking on Celebration Avenue, then walking the short distance to the display, if possible. 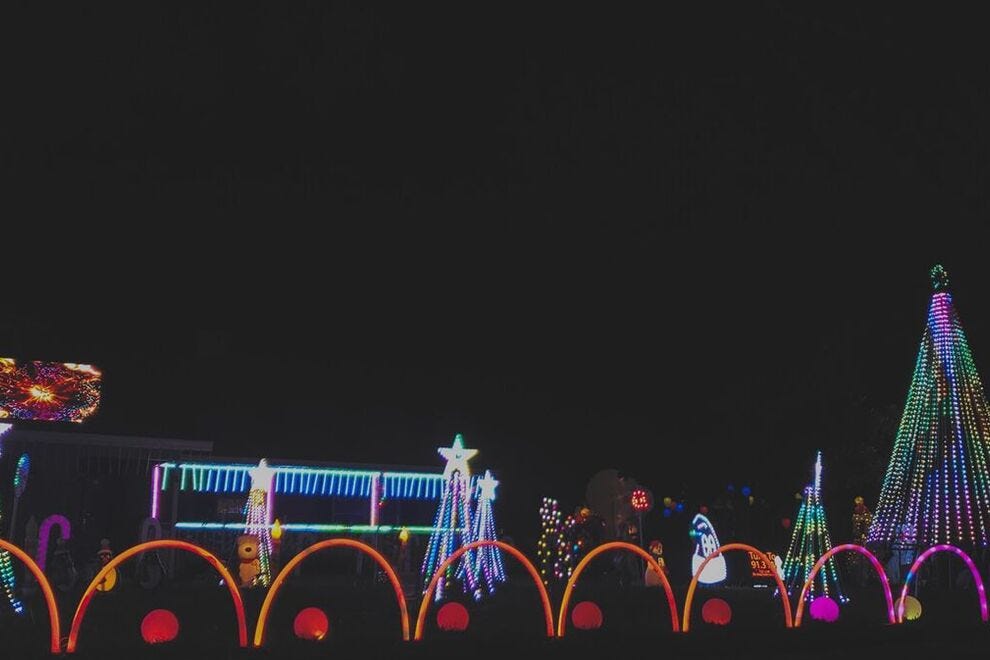 Photo courtesy of Andy B – The Bivona Christmas Light Show

The Bivona Christmas Light Show is a breathtaking display of lights that dance in sync to the Christmas music that’s played outside the home. The Bivona family has been decorating their home for people to enjoy for over a decade, and it’s now bigger than ever with over 100,000 computer-controlled lights.

The music that’s often played is on the non-traditional side but is themed to the holidays. The light show runs from 7 pm to 11 pm each night from December 1 to December 31. 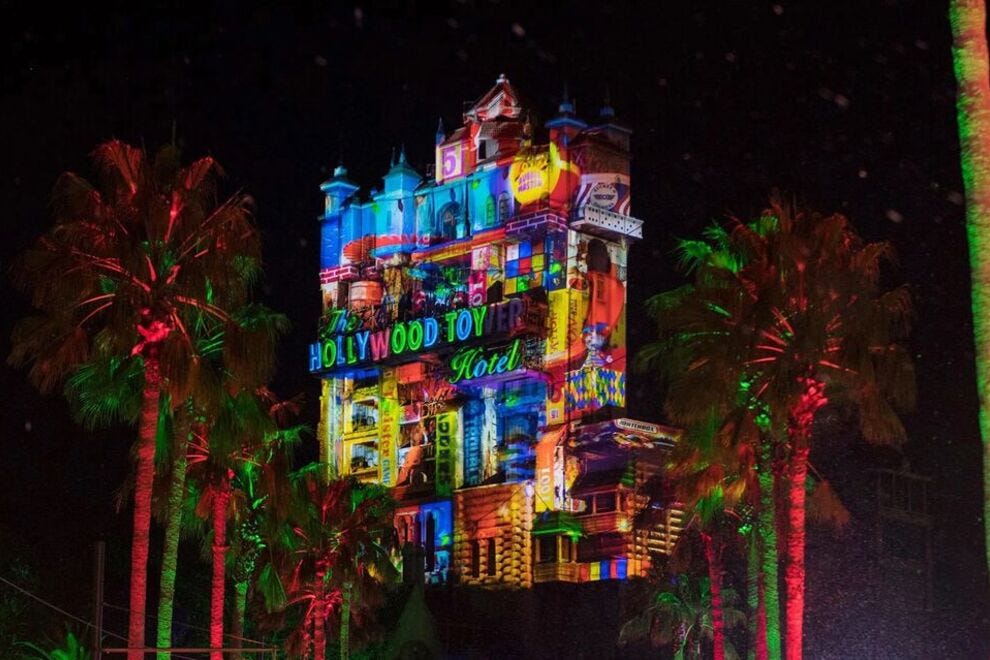 There’s also Santa Claus Motorcade, a parade worthy of its Hollywood inspiration. You’ll find holiday décor throughout the theme park, and there’s even a special holiday finale added to the Frozen Sing-Along show for the season. 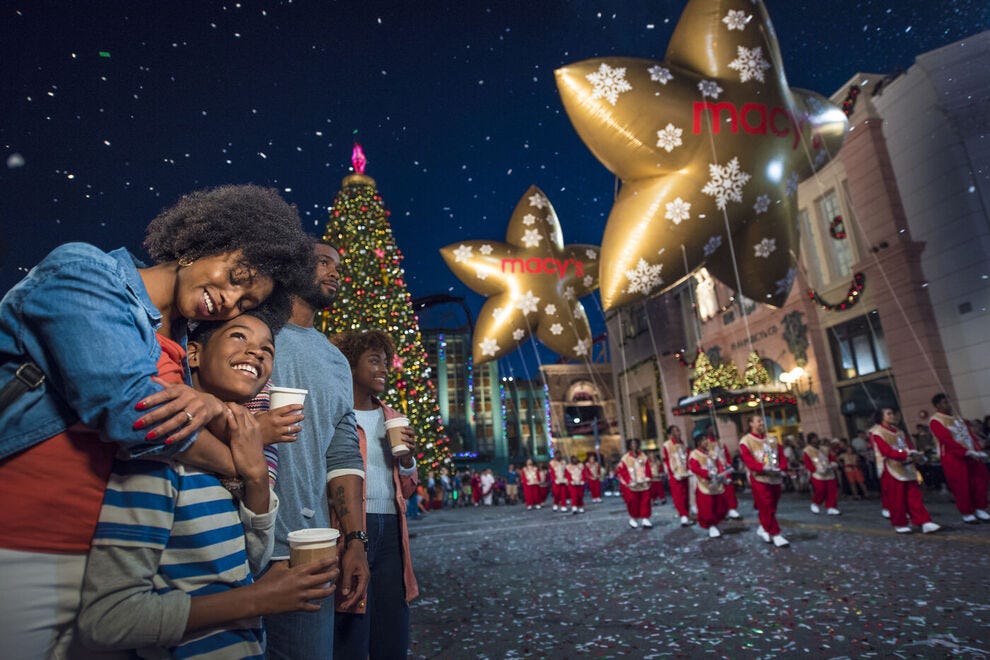 Running through January 2, 2022, Universal’s Holiday Parade featuring Macy’s at Universal Studios Florida can be enjoyed by anyone with a ticket to the theme park at no additional charge. Like the traditional Thanksgiving parade from Macy’s in New York City, Universal’s parade has larger-than-life floating balloons of beloved characters. Look for Shrek, the Minions and other characters from Universal’s films. There will also be parade performers and an appearance by Santa Claus!

It’s Santa that lights the elaborate, 80-foot-tall Christmas tree. Be sure to take in the expansive decor and light displays throughout the theme park as part of the annual celebration. 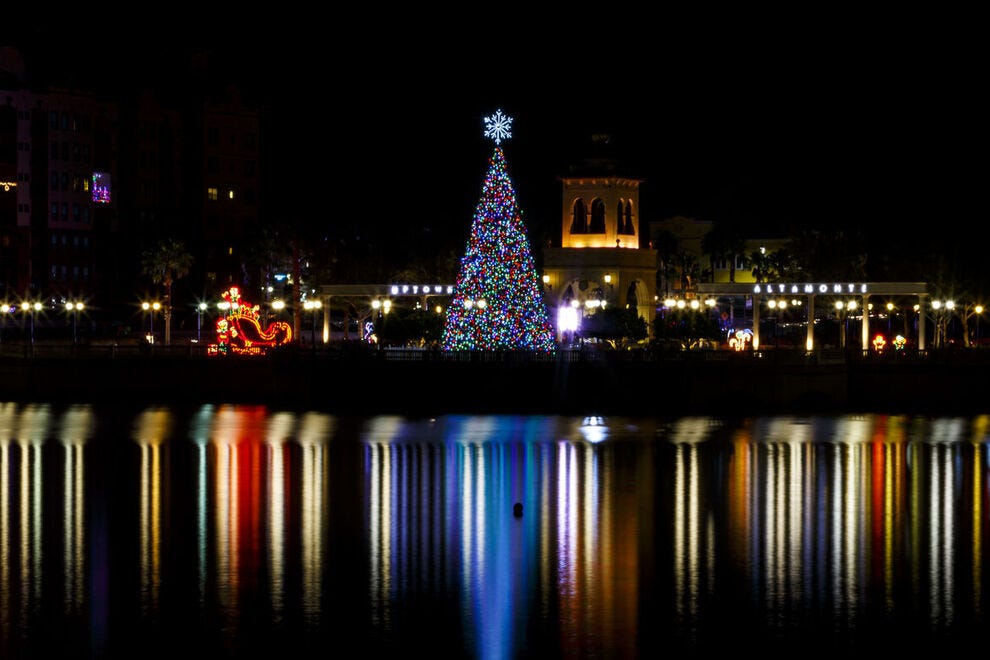 Photo courtesy of Cranes Roost Light Up the Holidays

Cranes Roost Light Up the Holidays

Light Up the Holidays is a grand celebration at Cranes Roost Park in Altamonte Springs. It will be going on through January 2, 2022. Over 200,000 vibrant Christmas lights are featured in more than 100 different festive displays within the park. Visitors are often especially impressed by the 60-foot-tall Christmas tree with thousands of holiday lights, ornaments and garland. 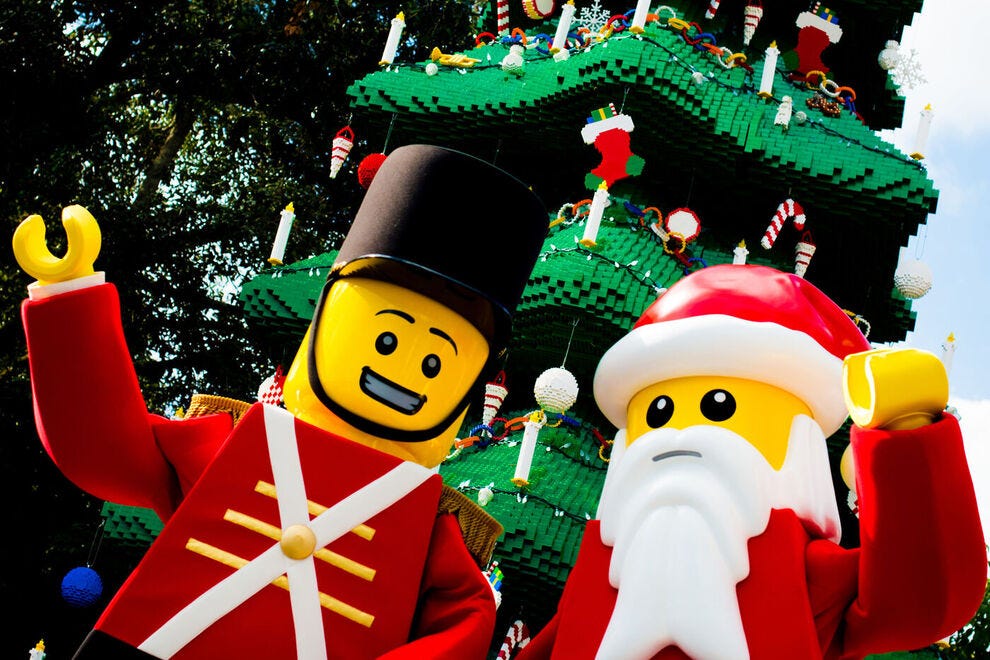 Available on select dates through December 31, Holidays at LEGOLAND transforms the theme park into a winter wonderland. The twinkling light displays will delight families, and there is also seasonal entertainment. For one thing, you can rock around the LEGO Tree in the heart of LEGO City. A giant LEGO tree comes to life with dazzling lights that are in sync with Christmas music. Guests can also enjoy brand-new stage shows with a holiday theme. 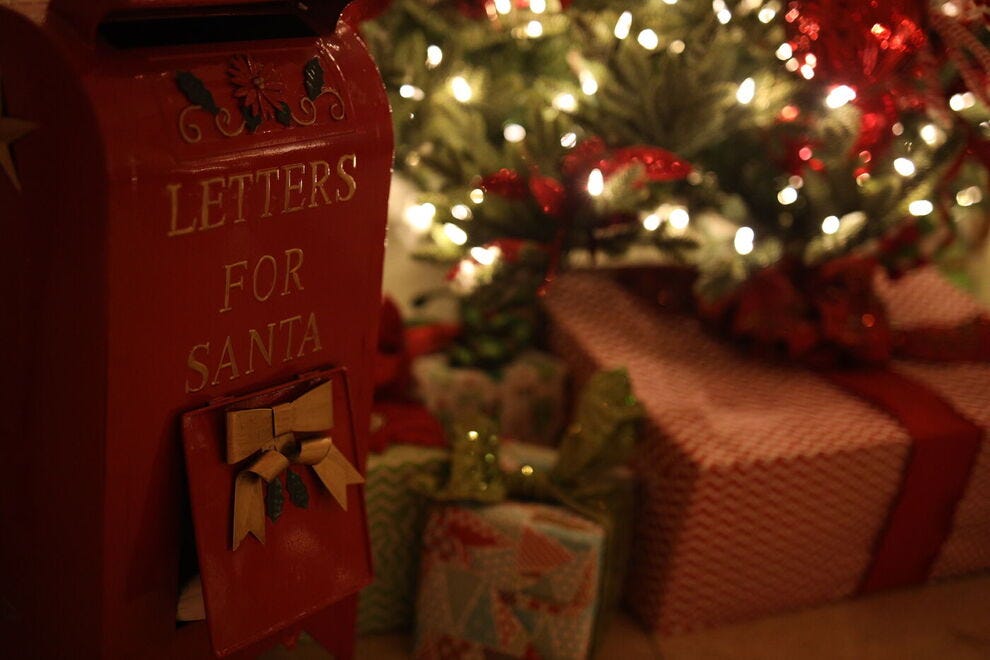 Twinkling light displays illuminate the night at the Ritz Carlton Grande Lakes Orlando, which offers a grand holiday celebration every year. The sparkling luminaries and lights along Grande Lake are unforgettable. Children are delighted by the Grande Lakes Express where they can enjoy a journey to view holiday lights on the lake. The holiday vignette by the gazebo creates the perfect opportunity for a wonderful holiday photo with family or a selfie. 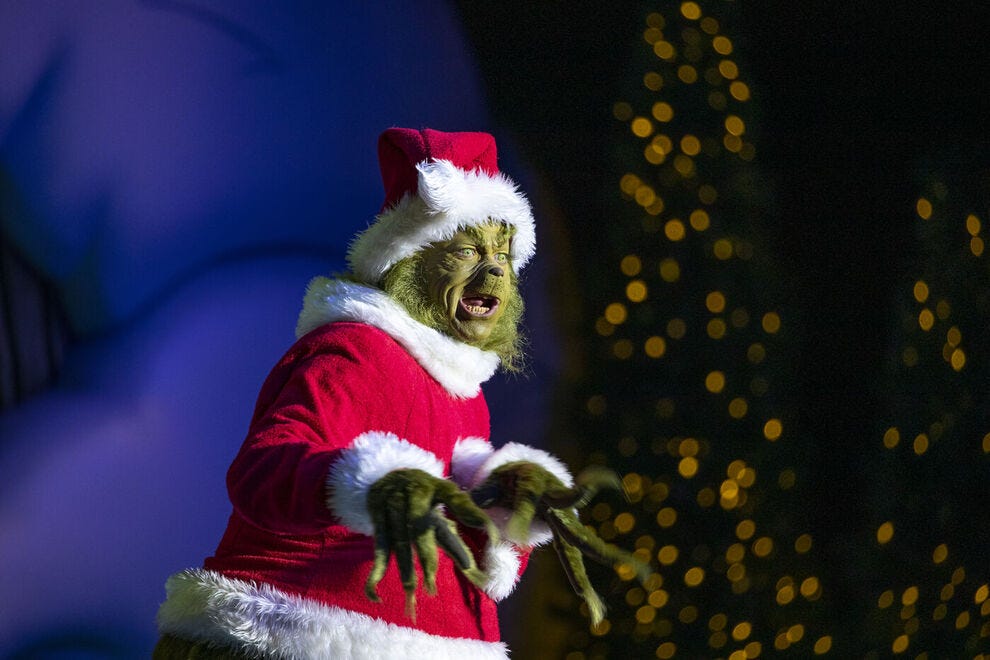 Whether you fondly remember the animated Grinch from childhood or Jim Carrey’s cinematic rendition of the ultimate holiday villain, you’re sure to enjoy the Grinchmas Who-liday Spectacular. Seuss Landing in Universal’s Islands of Adventure is decorated for the Who-liday through January 2, 2022. The décor and displays are outrageous and fun, and you may spot Who residents.

Visitors enjoy a live retelling of the beloved holiday tale that features music recorded by Mannheim Steamroller. There’s also a photo opportunity with the Grinch himself at the All The Books You Can Read Bookstore. 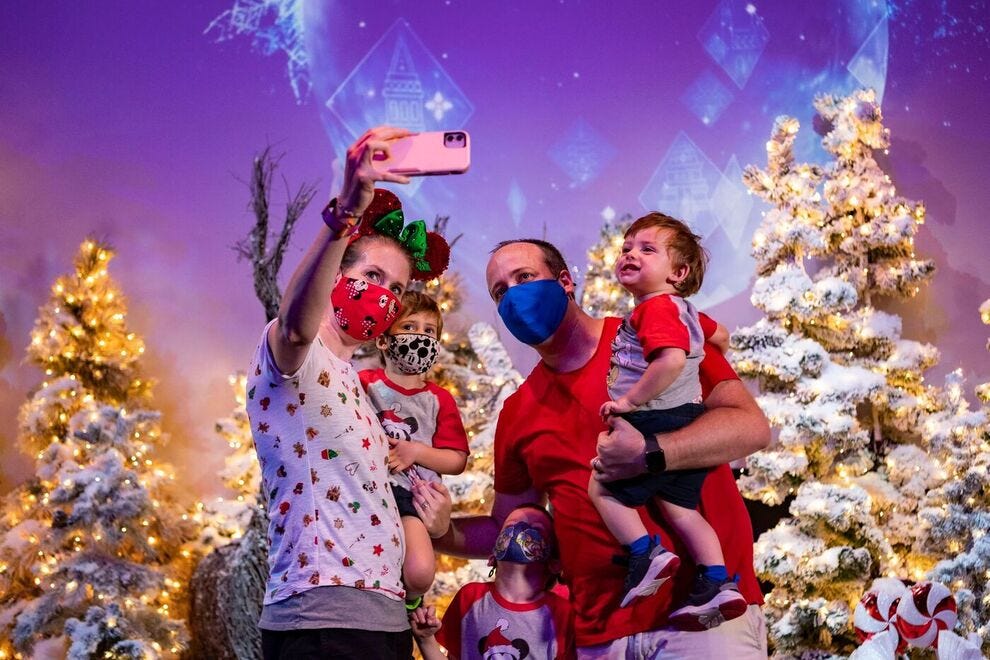 EPCOT International Festival of the Holidays

EPCOT has always been known as the most educational theme park at Disney World, but it really takes that concept to another level with its joyful International Festival of the Holidays. From November 26 through December 30, 2021, EPCOT holds this holiday event that celebrates and embraces celebrations from around the world.

Visitors can explore the circle of the park’s World Showcase to experience holiday decorations and other traditions from many cultures. There are stories being told through rides, displays and live performances. Music fills the air and seasonal cuisine is served.