Brunswick stew is a Southern staple, especially in barbecue restaurants around the region. It’s made with a tomato base and features lima beans, corn and pulled pork. In the early days, all forms of game were used, including squirrel and opossum, with whatever vegetables were in season.

Modern versions use ketchup and barbecue sauce, adding a bit of sweetness. Some have a thin broth while others have a thicker sauce found in traditional stews. A large cast iron pot is required, as the soup is served for groups, either for family meals or for community events such as fundraisers and holidays. It’s what you might call a “social stew,” which cooks for many hours.

But there’s a centuries-long debate about where it actually comes from.

The coastal city of Brunswick, settled in 1738, is one of the claimants of the namesake stew. A large metal pot at the visitor’s center sits atop a concrete marker indicating that this one was used in 1898 on St. Simons Island. It shows off how it would have been cooked during this time, stirred with a large paddle.

A Georgia homemaker also had a recipe published before the Civil War for what she called “camp stew,” which has similar ingredients. These days, the dish is found in restaurants all over the Golden Isles and at the annual Brunswick Rockin’ Stewbilee, an annual event with a stew cooking competition, live music and an antique car show. 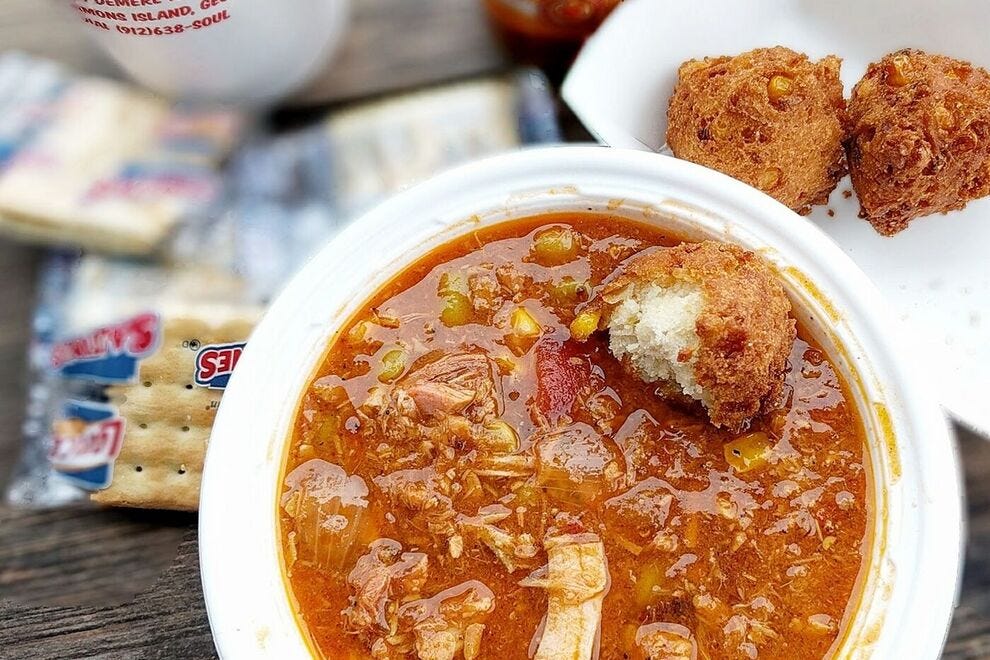 One of the best places to try it is at Southern Soul Barbeque on St. Simons Island, one of the top-rated barbecue restaurants in the region. Its version uses both North Carolina vinegar-style sauce and South Carolina-style mustard sauce with chicken, pork, brisket and turkey.

“What makes our Brunswick stew so delicious is that we fire all the pork and chicken that goes into the stew pot in our smokehouse daily over hardwood pits,” says owner Griffin Bufkin. “One of the most important steps is letting it simmer and cook down over low heat for hours. It’s a process of adding layers slowly to develop the characteristic flavors. We prefer the texture to be a bit more defined and do not over-process ours like some joints.”

Whether or not Georgia’s version is the “real” one, the area also has a thriving seafood industry, home to wild Georgia shrimp. 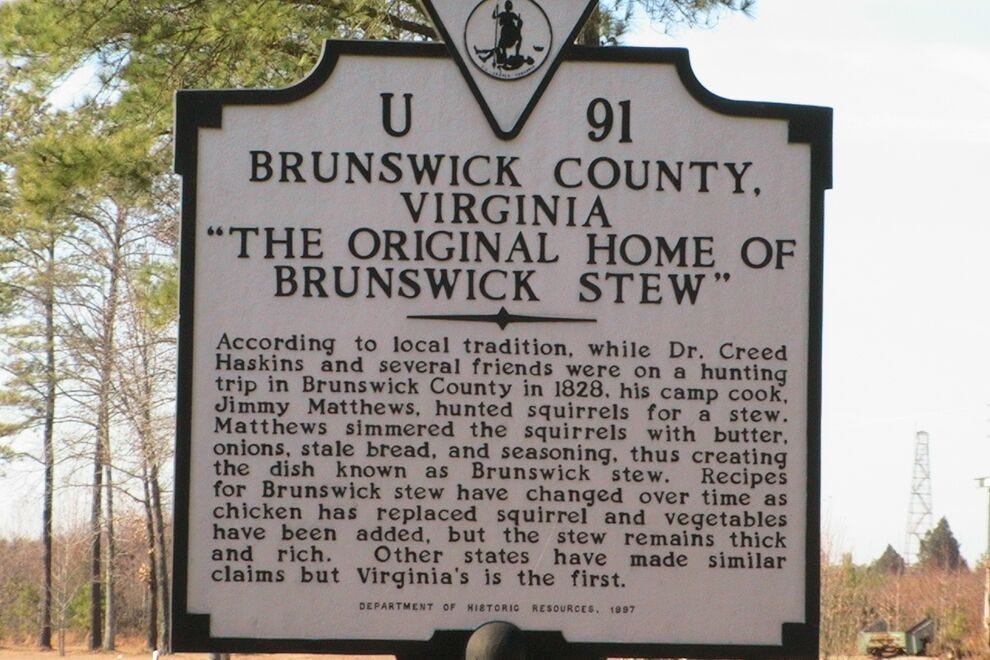 A roadside marker in Brunswick County, an hour south of Richmond, claims that the dish was first invented by a Black cook named Jimmy Matthews on an 1828 hunting trip, incorporating squirrels with stale bread and onions.

In 1988, the Virginia General Assembly passed a resolution to honor Brunswick County as the official birthplace of Brunswick stew. There’s an annual Brunswick Stew Day at the Capitol every January, which welcomes the reigning Stew Champion, and in 1998, the community founded the Brunswick Stewmasters’ Association. The county also has the Taste of Brunswick Festival.

The official Brunswick Stew Trail highlights places to eat the dish and farms to source ingredients from. Among them are both traditional restaurants and roadside stands. The Alberta General Store in Alberta, Virginia has one of the most praised versions of the stew.

William Clark Bennett, reigning Stew Champion of the Taste of Brunswick Festival held in 2019, got his start cooking with his late father. Bennett and his fellow members of the Danieltown Stew Crew cook for those in need through fundraisers and free meals.

“All together we have won six championships and cooked at the governor’s mansion three times for three different governors,” says Bennett. “As far as the main ingredients, I use the basics – chicken, beef, shoepeg corn, butter beans, onions, tomatoes and potatoes. The recipe is only known to myself and two others. I plan to pass this down to my children one day as my dad did to me.”

It would be irresponsible to ignore the contributions of Indigenous people, who lived in both Tidewater Virginia and coastal Georgia long before European arrival. The people of these areas were eating dishes with leftover deer and pork with corn and beans well before the ships left England. These foodways would have certainly influenced the colonists in both Georgia and Virginia.

In the 1942 book Cross Creek Cookery, author Marjorie Kinnan Rawlings claims that Brunswick stew’s origin actually traces back to the Duchy of Brunswick-Lüneburg, Germany, where it became a favorite of Queen Victoria. It’s this place that both Georgia and Virginia locales are named for, and it’s the ancestral birthplace of King George II. There’s also an Acadian Brunswick stew, named for the New Brunswick area of Canada, made with poultry and vegetables.

While we may never solve the mystery of who really created Brunswick stew, it’s certainly a delicious dish.