Get a virtual taste of the history and cuisine of Naples, Italy

Naples: Home to ancient history and the world’s best pizza

Naples, “Napoli” in Italian, is only 142 miles from Rome and shares a fascinating history of its own. It was first settled by the Greeks and is among one of the oldest continuously inhabited urban regions in the world.  Its classic city center is the largest in Europe and is a UNESCO World Heritage site.

In addition to the city’s historical significance and stunning natural beauty, it has gained a worldwide reputation for its outstanding cuisine. Explore it on this virtual tour. 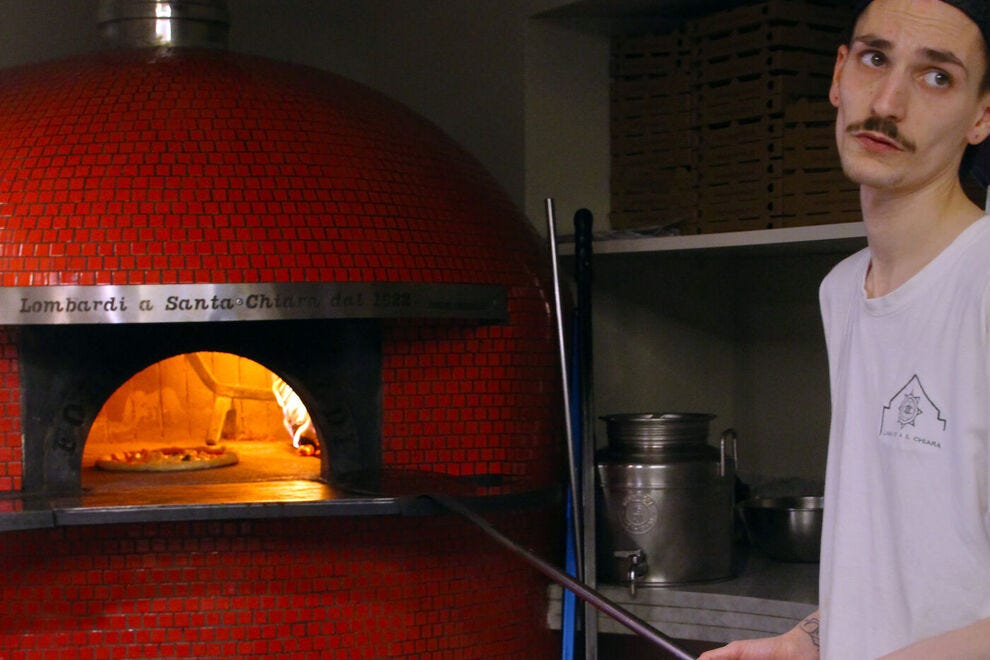 A pizza oven unlike any other

Naples is renowned as the home of the pizza pie, and creating the perfect pizza Napoletana is a true work of art. It has also earned a place on UNESCO’s list of intangible cultural heritage (a knowledge or skill considered to be part of a place’s cultural significance), with some stringent requirements to qualify.

After kneading the dough by hand only, the pizza must be formed without the use of a rolling pin, only spun by hand. It must be baked for 60-90 seconds in an oven heated to 905 degrees F. Tourists marvel at how a pizza can be cooked so quickly! 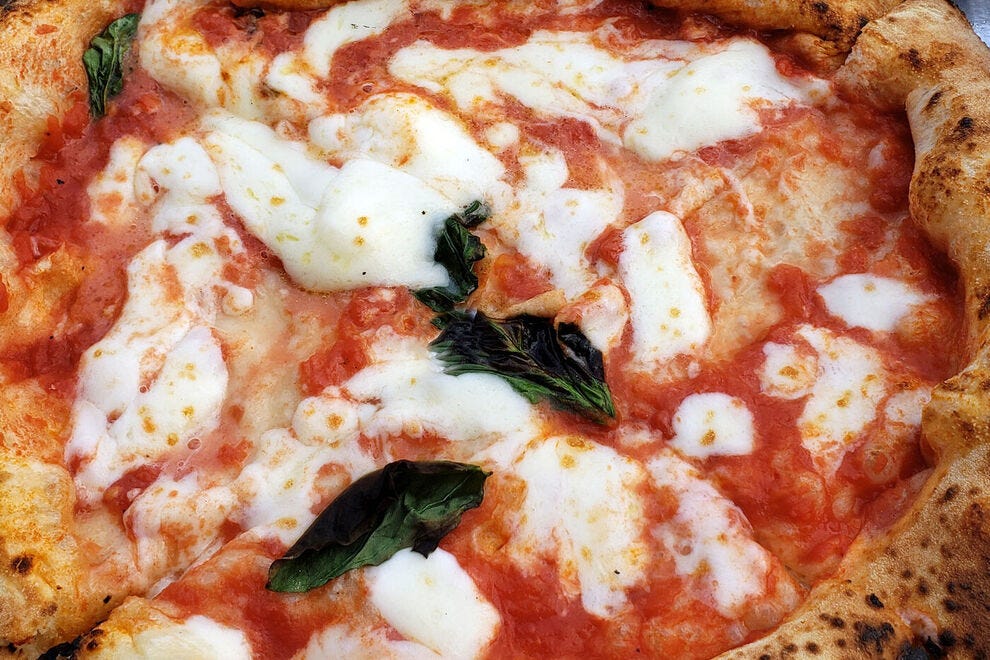 Only the purest ingredients

The pizza Margherita of Naples may look simple, but it packs a wallop of flavor owing to the ingredients that must be used in the process by Italian law. 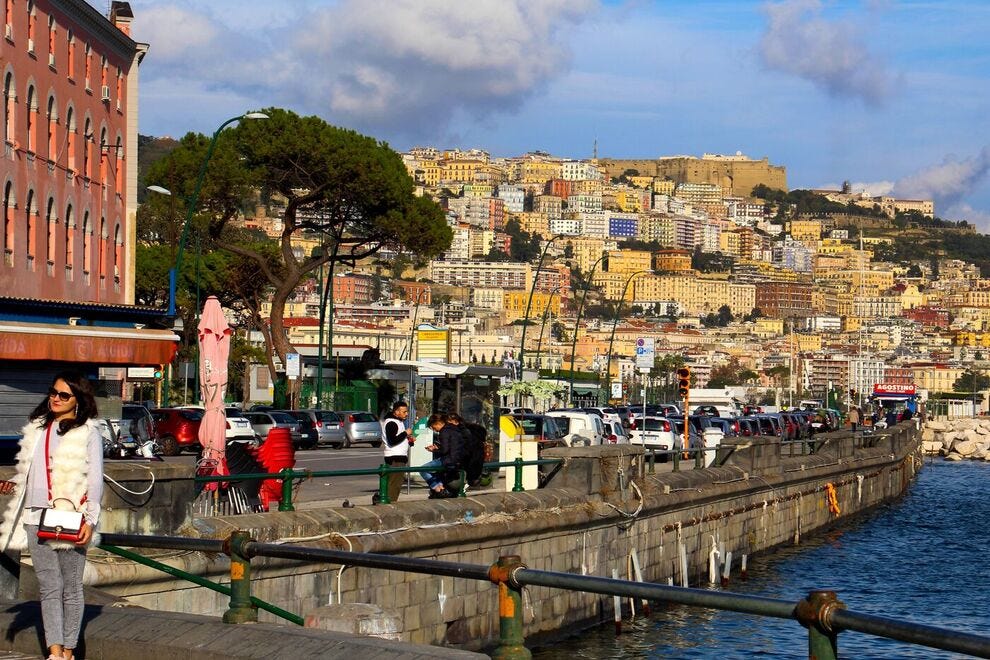 One of the world’s most beautiful promenades

If you have only one day (or part of one) to tour Naples, an excellent choice would be a stroll along the famous seafront Lungomare Caracciolo promenade, a favorite among locals and heralded as one of the most beautiful walks in the world.

At less than two miles each way, this promenade will take you past unforgettable views of the city. And you don’t have to hoof it in its entirety. Public transportation, as well as a variety of guided tours, is readily available. 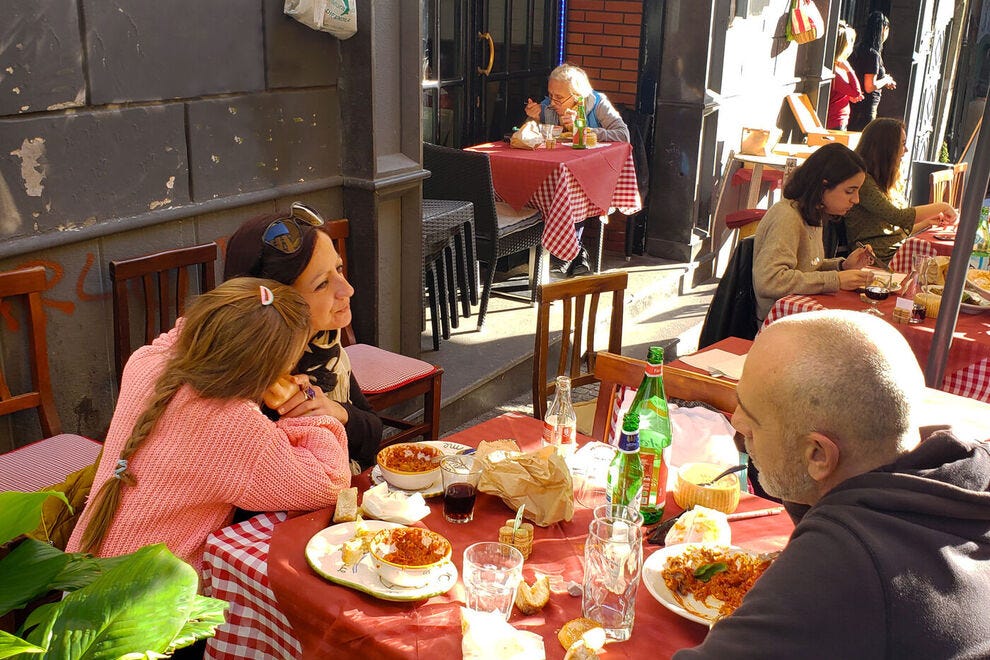 In Napoli, food is king. The temperate climate allows for outdoor dining during most of the year, both in simple restaurants (trattorias), in cafés, or in more formal dining establishments. 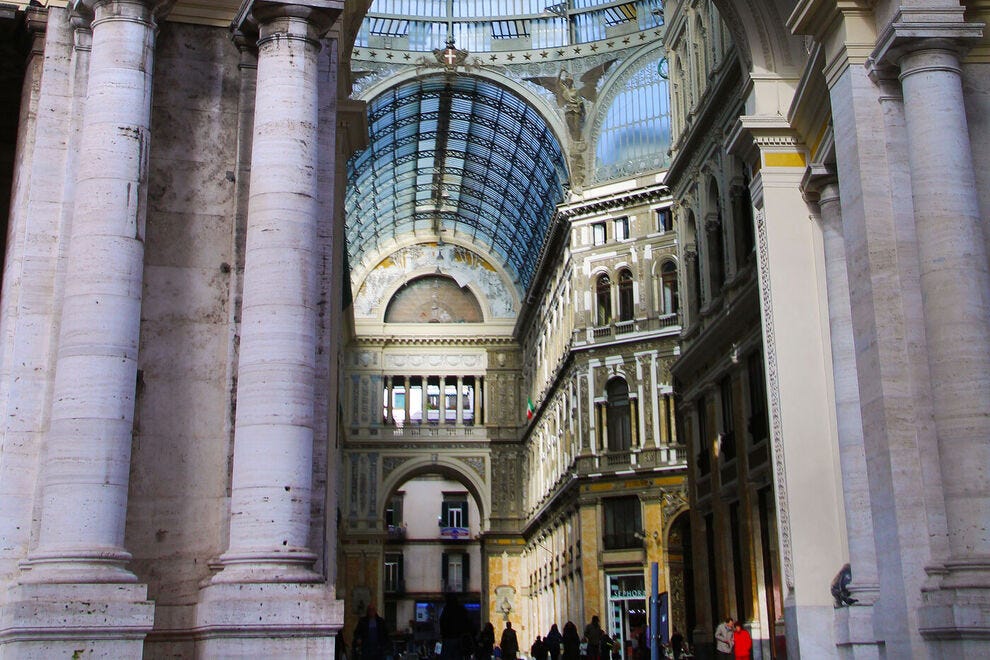 Shop in a World Heritage site

Chances are you haven’t shopped in a mall quite like the Galleria Umberto I, another World Heritage designated site in the heart of Naples. Built in the late 19th century and modeled after the famous Galleria in Milan, the Galleria Umberto is crowned with a domed glass and steel roof (which allows natural light to flow through the building) and is home to designer stores, cafés and restaurants. 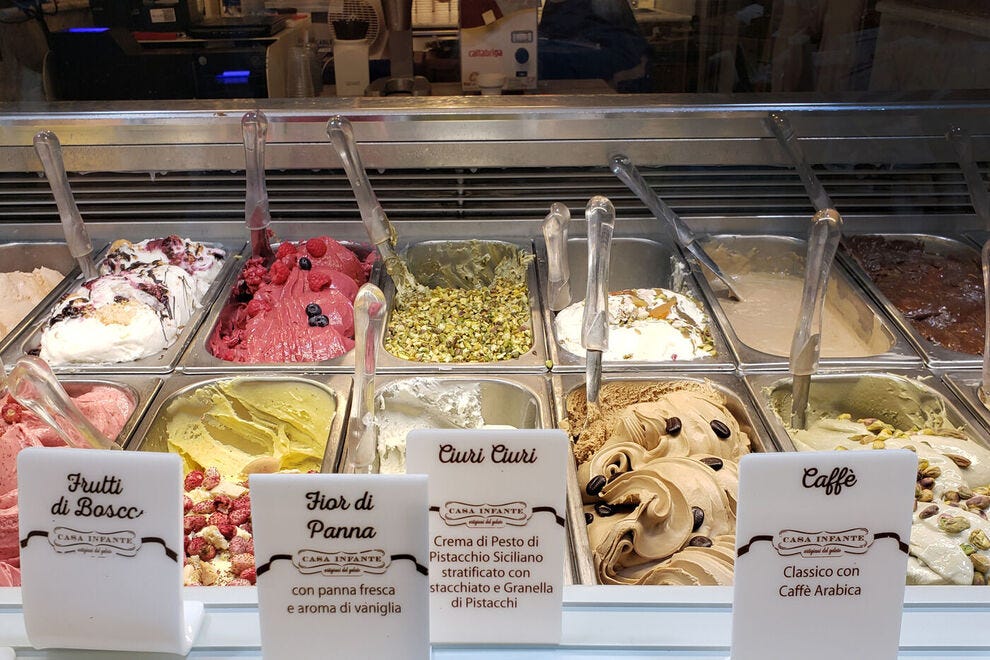 Gelato at its finest

Every city and town in Italy has its own gelato specialties (Italian frozen treats similar to ice cream and fruit sorbet). And Naples is no exception. The wholesome milk and fruit produced in this region no doubt contribute to the quality of the Neapolitan gelato. 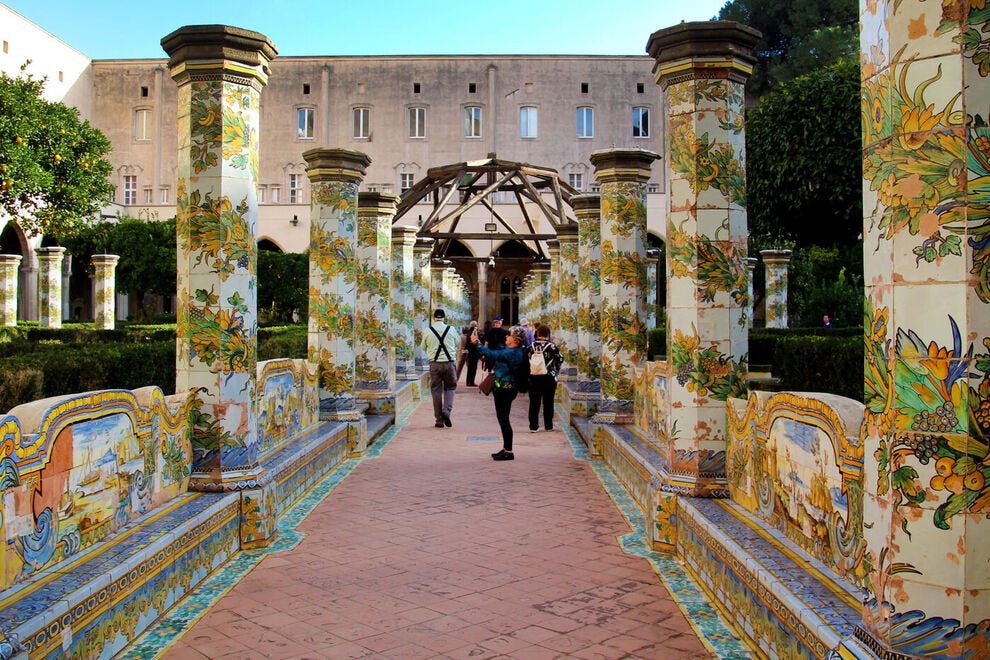 Built in the early 14th century by the King of Naples, the Santa Chiara cloister is one of the city’s most artistic sites. The peaceful gardens of the cloister feature an exquisite display of 64 octagonal columns with connecting benches, adorned with magnificently decorative 18th-century Majolica tiles.

You can also admire well-preserved frescos on the exterior walls which date from the late 17th century. 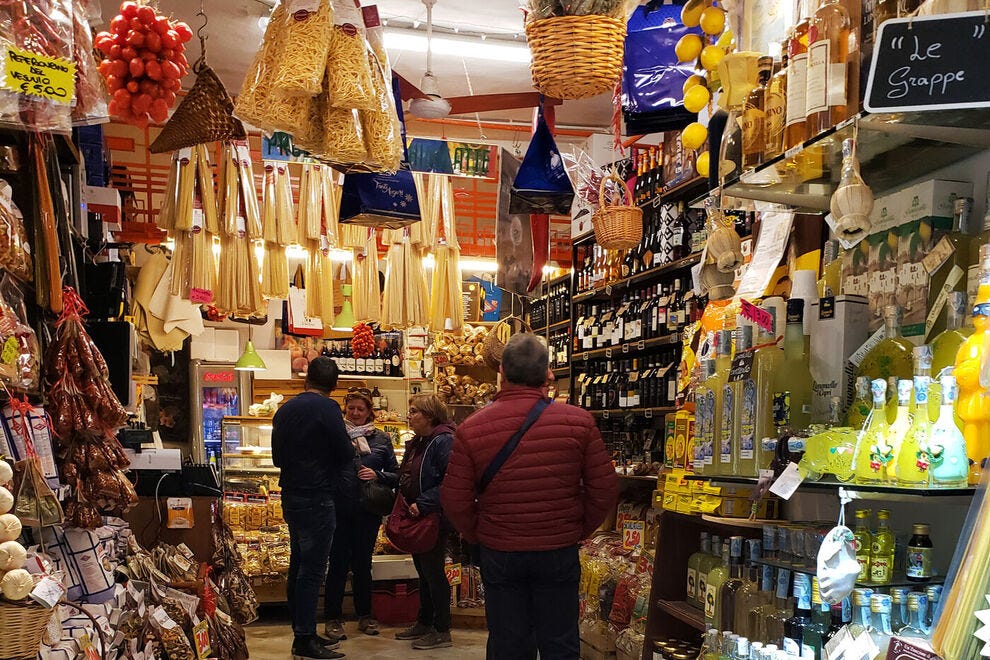 The picturesque, narrow main street of Spaccanapoli traverses the city’s historic center. In addition to sidewalk cafés, pizzerias, and stores and boutiques, it is filled with tiny food markets.

Despite their size, these small shops carry an astounding array of ingredients such as artisan pasta, cheeses, dried tomatoes, mushrooms, and sausages – not to mention a considerable variety of wines and liquors. 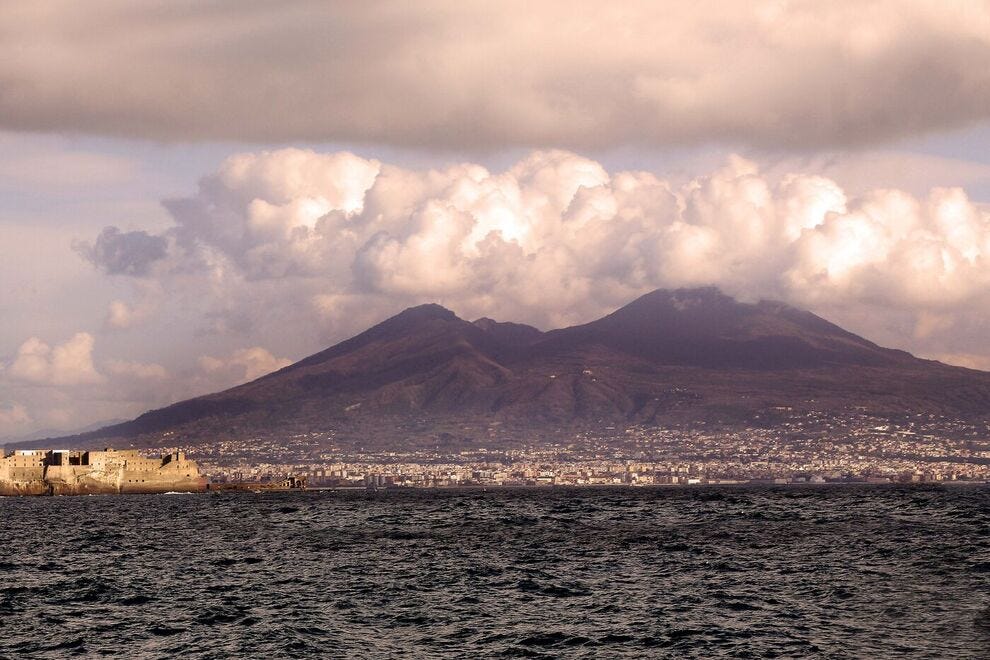 The infamous Mount Vesuvius, the volcano that erupted in AD 79 and buried Pompeii (as well as other cities along its path of ash) is a mere six miles from the heart of Naples. Its peak looms dramatically over most areas of the city. Day tours to Vesuvius National Park are very popular and are often combined with a tour of the ruins of Pompeii. 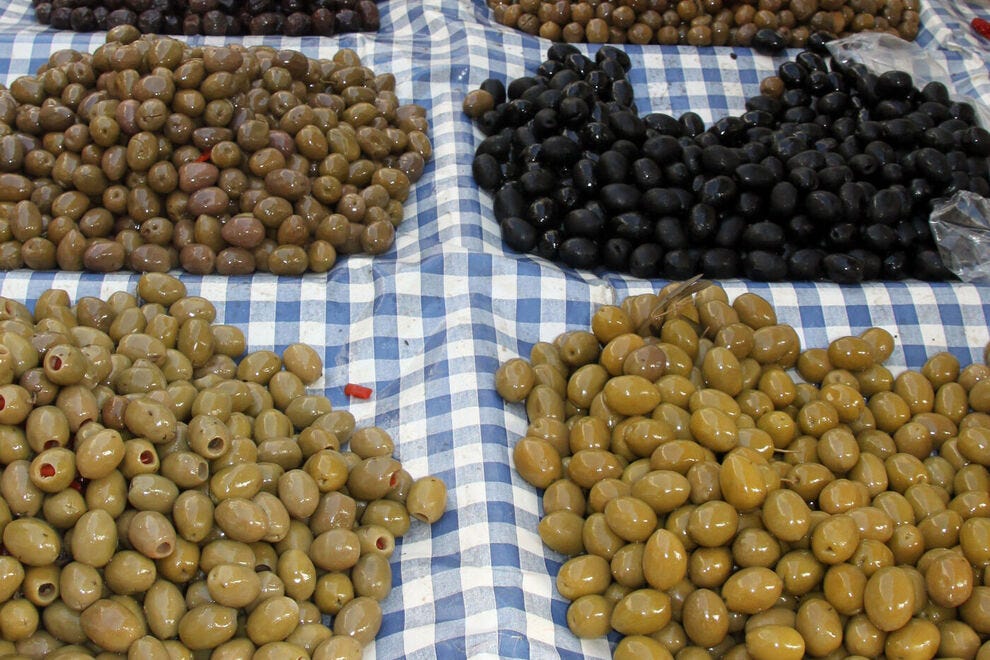 If you love olives, you’ve come to the right place! Italy boasts 400 known varieties. While many of those are used to produce olive oil, you’ll still find an amazing assortment of cured olives at local markets and in grocery stores. 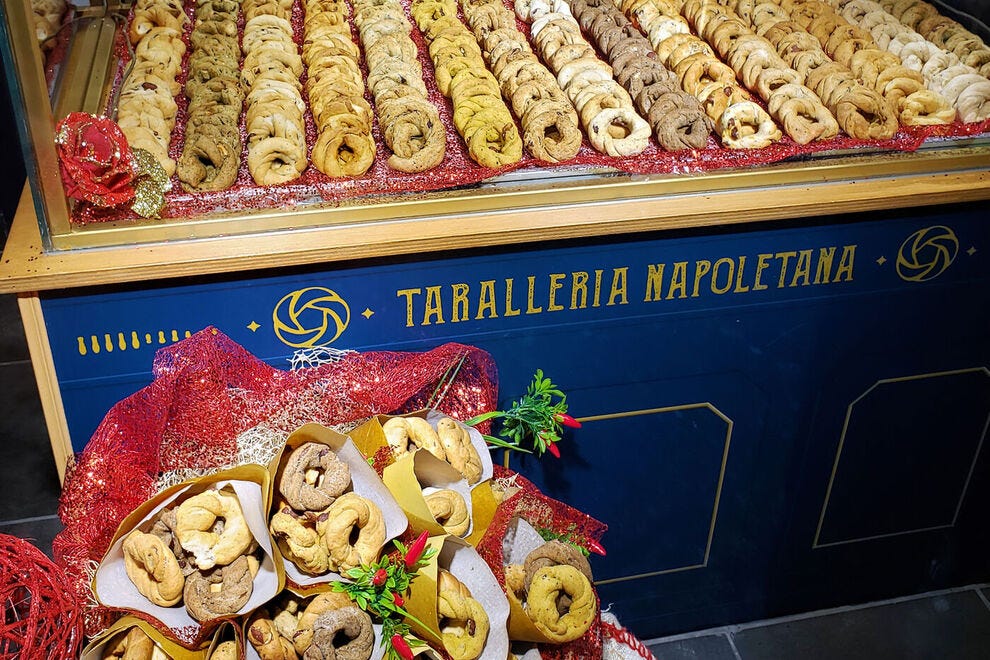 Taralli, a favorite snack in Naples

When in Naples, you might want to enjoy one of Southern Italy’s snack foods, Taralli. Similar to a pretzel, taralli can be either sweet (glazed with sugar) or savory (flavored with garlic, onion, sesame and poppy seeds, fennel and chili, to name a few ingredients) and are often dunked in the delicious local wine. 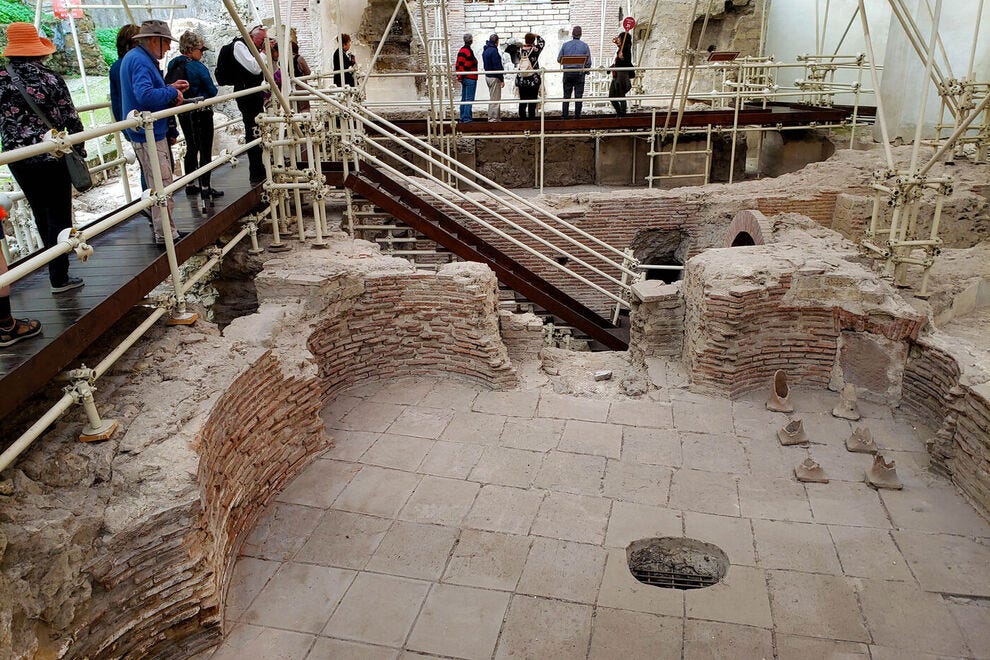 Discover the many levels of Naples

Much of Naples has a honeycombed underground that reveals ancient discoveries resulting from ongoing excavations. For example, the unearthed ruins of the baths in the Santa Clarita cloister.

If you visit the cloister, make it a point to explore these excavations (still in process today) and marvel at the ruins of thermal baths that were part of the ancient Roman city of Neopolis. 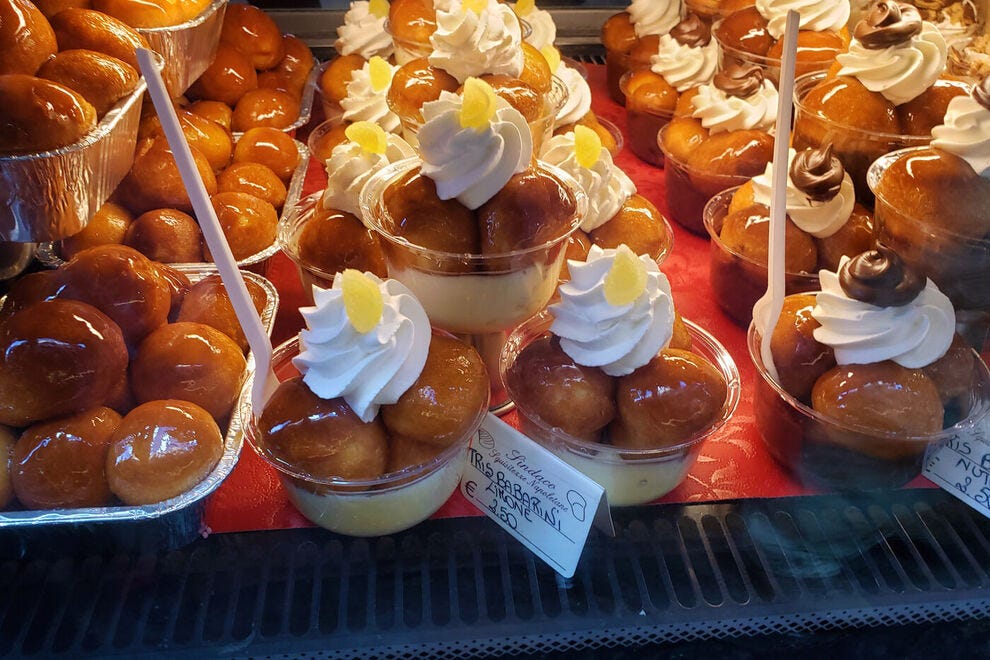 The history of the local rum cakes

Who knew that these delicious cakes would have such a history? The “baba cake” (baba means old woman or grandmother in most Slavic languages) was actually created around 1736 for the king of Poland. While considered a delicacy of Naples, where it is made with a lemon custard and saturated with rum, Baba’s actual origin is claimed by France. 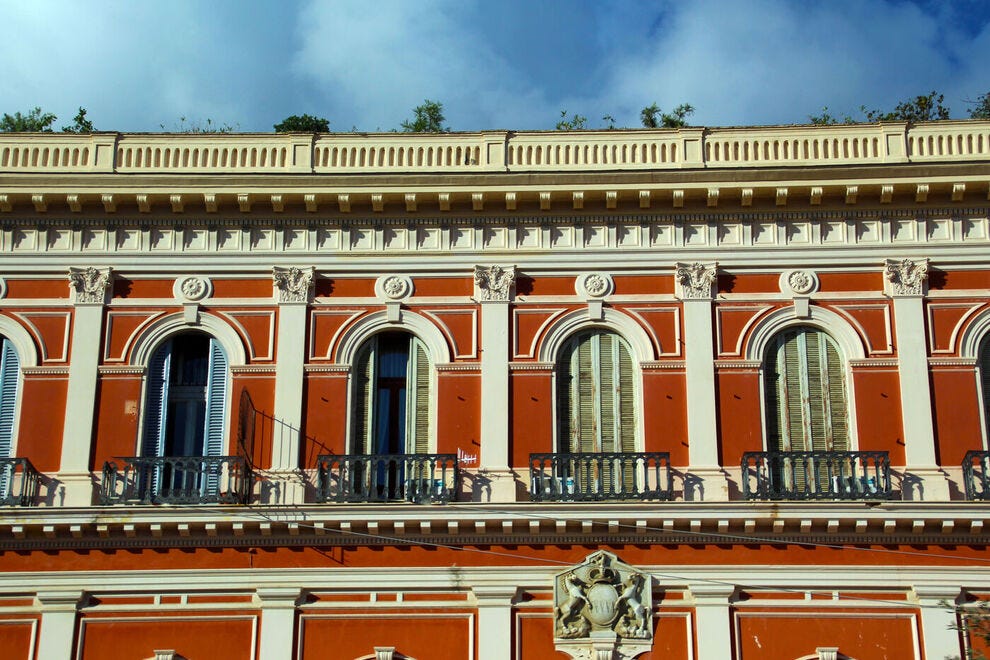 Architectural highlights across the centuries

There’s a good reason why the city center of Naples has been named a UNESCO World Heritage site. Everywhere you look, you will see exquisite architectural details. Keep your camera on hand as you stroll through the maze of Naples’ historic center, with its promenades, grand squares, bustling side streets, and picturesque alleyways (with rows of colorful laundry strung across the buildings). 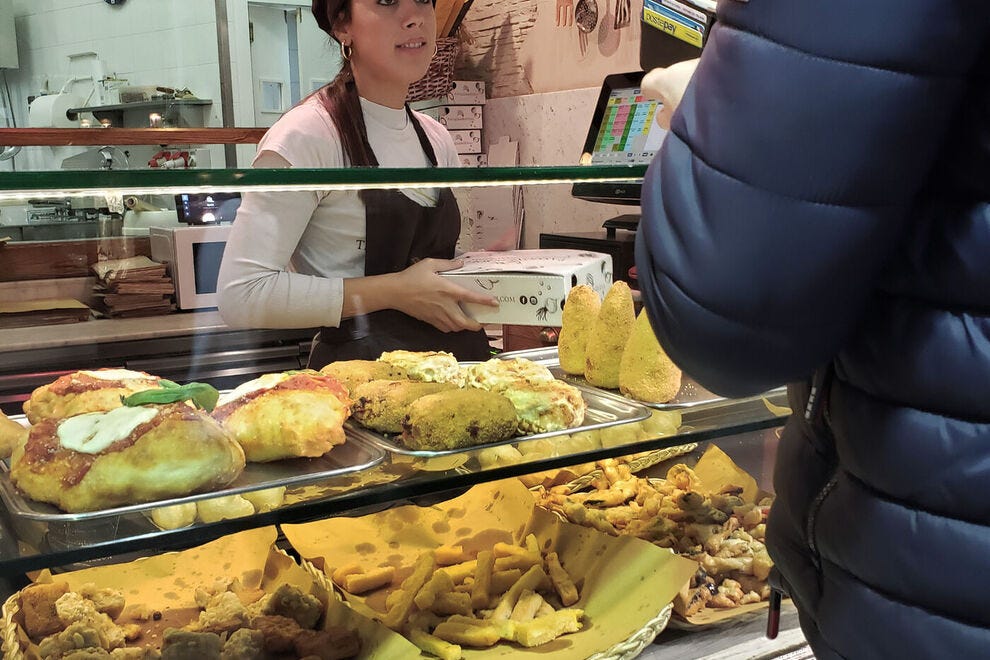 It goes without saying you’ll never go hungry in Naples. In addition to the famous pizza, you can indulge in a wide variety of other local specialties, should your spirit (and stomach) move you.