Popular clam chowders and why New England’s is the best

I grew up in New England, which means that from the time I was young, I had a certain fondness for clam chowder. I can recall, from my earliest memories, the anticipation that came with seeing a pot of chowder boiling on the stove.

The creamy texture, the softness of the potatoes, the crunch of the oyster crackers sprinkled generously on top were easy to appreciate. It took a little longer to learn to love the less appealing features – the rubbery texture of the clams and the occasional grittiness of sand, a price you must pay for eating them fresh.

Though I grew to love clam chowder in my grandmother’s small Massachusetts home, it wasn’t until recently that I learned the chowder’s history is as rich as the soup itself.

New England clam chowder is a dish that can be traced back to the earliest Pilgrim settlements on the Northeast coast. Europeans were already making a primitive chowder, but the abundant natural resources of the coastline gave them new ingredients to play with.

A typical French chowder at the time revolved around fish; the New England clam chowder we know today is actually the result of the introduction of an unfamiliar seafood: the quahog.

The quahog – a round, hard-shell clam – played a major role in the lives of coastal Native American tribes, serving as a staple food source, a tool used to carve out canoes and bowls, and even a hair removal apparatus.

Curiously, the original Pilgrims had great disdain for the shellfish, using it as feed for their pigs. However, as the harsh New England winters raged and settlers were forced to turn to less attractive ingredients, an affinity for New England clam chowder was born.

The affinity developed into a full blown adoration of the dish, lovingly described by American author Joseph C Lincoln as “a dish to preach about, to chant praises and sing hymns and burn incense before.”

As far as New Englanders are concerned, there’s only one type of ‘chowdah.’ I lived a good portion of my life blissfully unaware of the existence of other types of clam chowder, but eventually I discovered a range that ran the gamut from vaguely familiar to sacrilegious stews that didn’t deserve to share a name with the soup I grew up eating.

The most commonly known variant is referred to as Manhattan clam chowder, containing a thinner broth than its New England cousin, along with a deep red color. This color is derived from the addition of tomatoes, likely due to the large Italian immigrant population of Manhattan. 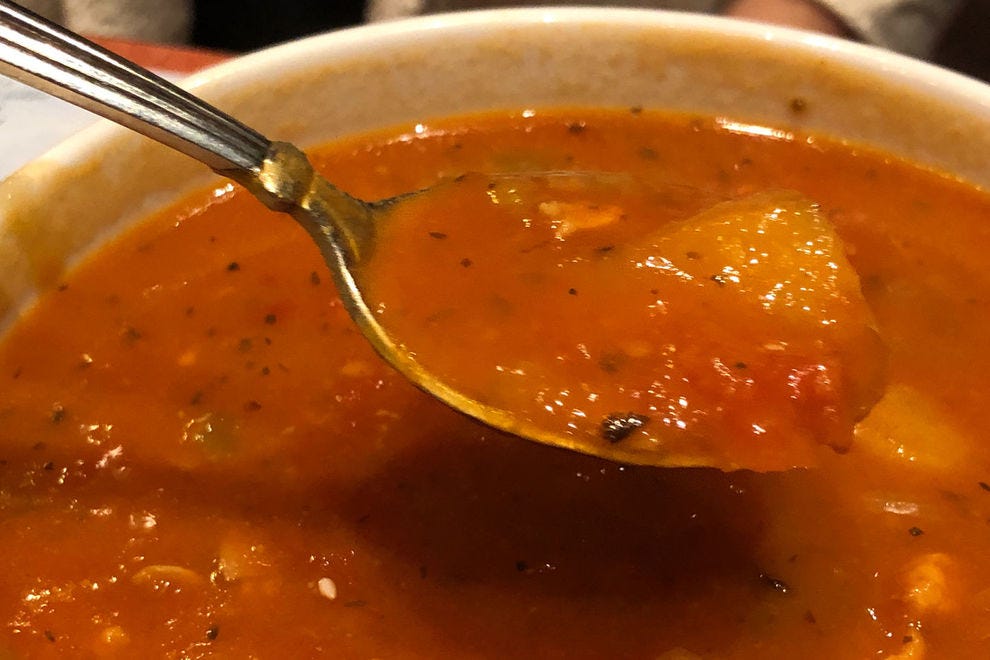 As a lover of the New England variety, and a person with a disdain for tomatoes, I found the soup repulsive – a common sentiment for native New Englanders. And, apparently, non-New Englanders. Chef and Oregon native James Beard described thusly: “…that rather horrendous soup called Manhattan clam chowder…resembles a vegetable soup that accidentally had some clams dumped into it.”

The hate climaxed in 1939 when a lawmaker from Maine attempted to prohibit the addition of tomatoes to clam chowder. While tensions seem to have cooled over time, there’s no denying that the rivalry of New England vs. Manhattan clam chowder is still alive today.

Though less famous, a number of other clam chowder variations exist. Rhode Island clam chowder is lacking two of the most distinct features of both New England and Manhattan varieties: the cream and the tomatoes. Sporting a clear broth and packed with vegetables, the soup exists as a lighter variant, overshadowed by its more popular relatives.

Hatteras clam chowder – also consisting of a clear broth – originated in coastal North Carolina in the Outer Banks. This recipe originated out of necessity, as the Outer Banks region was not able to sustain large-scale dairy farms or tomato crops.

One of the most unique varieties is the Minorcan clam chowder, originating near St. Augustine, Florida. This chowder is tomato-based with an interesting twist: the datil pepper. This pepper, originally brought to Florida by slaves from the Spanish island of Minorca, is a key ingredient that packs the chowder with some serious heat.

While each variety of chowder has its fans, the creamy texture and rich history of the New England style reigns supreme. Classic examples can be found at Boston’s Union Oyster House – the oldest continually operating restaurant in the U.S. – as well as the Atlantic Fish Company and Legal Sea Foods, which launched an empire on the back of its thick and savory flagship soup.

Many have tried, but none can master a true ‘chowdah’ quite like the Northeasterners who invented it all those years ago.

Independent Bookshop Week: Discover some of the UK’s most loved stores by following a literary tour