Climate change has weakened the ocean current which drives the Gulf Stream to its lowest ebb for more than 1,000 years.

Known formally as the Atlantic Meridional Overturning Circulation (AMOC), it is the driving force which brings warm water from the Gulf of Mexico up to the UK and is responsible for mild winters in Western Europe.

Analysis of the AMOC’s strength over time has revealed an unprecedented slowing over the last century, likely linked to soaring greenhouse gas emissions.

Experts warn that by 2100 the AMOC could weaken by as much as 45 per cent, bringing humanity dangerously close to a ‘tipping point’, resulting in devastating weather conditions across the world.

Should this happen, sea levels would rise along the eastern US coast, with potentially disastrous consequences.

The AMOC was the plot of the 2004 film ‘The Day After Tomorrow,’ which depicted the current coming to an abrupt stop and triggered catastrophic storms worldwide.

The Atlantic Meridional Overturning Circulation (AMOC) is the driving force which brings warm water from the Gulf of Mexico up to the UK. It is a complex system which is responsible for mild winters in Western Europe and it also influences the level of rainfall

WHY ARE OCEAN CURRENTS SO IMPORTANT?

Ocean currents play a critical role in regulating the planet.

Slower circulation in the North Atlantic can yield profound change on both the North American and European climate but also on the African and Asian summer monsoon rainfall.

This transfer of heat and energy not only has direct influence on climate over Europe and North American but can impact the African and Asian monsoon system through its effect on sea surface temperature, hydrological cycle, atmospheric circulation and variation in the intertropical convergence zone.

Professor Rahmstorf added: ‘If we continue to drive global warming, the Gulf Stream System will weaken further – by 34 to 45 percent by 2100 according to the latest generation of climate models.

‘This could bring us dangerously close to the tipping point at which the flow becomes unstable.’

He told The Guardian that a weakening AMOC would see Britain suffer more severe storms as well as increasing the number of heatwaves.

Direct data from the AMOC is hard to obtain so researchers collected information from a variety of proxy sources dating back around 1,600 years.

It backs up previous findings from the same team which found in 2018 that the ocean current has slowed by 15 per cent since the mid-20th century.

‘In 20 to 30 years it is likely to weaken further, and that will inevitably influence our weather, so we would see an increase in storms and heatwaves in Europe, and sea level rises on the east coast of the US,’ Professor Rahmstorf said.

The new study puts this figure into stark perspective by comparing its meandering pace with that of the last millennium and a half.

Until the 1800s, it was relatively stable but the current declined after the so-called ‘Little Ice Age’ ended in 1850.

Temperatures dropped low enough that the River Thames completely froze over and records show Londoners crossing the waterway on foot.

The last total shutdown of the AMOC is believed to have occurred at the end of the last proper Ice Age around 12,000 years ago, where temperatures in western Europe plummeted by up to 10°C.

The AMOC was the plot of the 2004 film ‘The Day After Tomorrow,’ which depicted the current coming to an abrupt stop and triggered catastrophic storms worldwide. Pictured is a scene of New York being flooded

This was likely not due to human impact as the Industrial Revolution had yet to reach full tilt.

But by the 1950s the AMOC had slowed severely as huge amounts of pollution disrupted its formation.

Increased rainfall and enhanced melting of the Greenland Ice Sheet caused by global warming add fresh water to the ocean which reduces the salinity and density of the water.

This subsequently prevents the warm water which has travelled north from sinking as it cools and this breaks the convection cycle ultimately weakening the flow of the AMOC.

What would the world look like if the Gulf stream collapsed?

If the AMOC was to collapse, it could have devastating effects on the climate in Western Europe and eastern America.

It is powered by warming and cooling of the Atlantic Ocean around Greenland and the movement of water also influences rainfall.

The current brings warm water north from the Gulf of Mexico towards Europe.

It is partly responsible for the mild winter temperatures seen in winter.

Without it, sea levels would rise along the eastern US coast, with potentially disastrous consequences.

Florida would be particularly badly affected as the flow of water northwards would be halted, seeing it collect on the state’s shoreline.

Western Europe would face more severe winters, while the summers in the US would be much hotter.

The Gulf Stream and the warm water also provides a ready supply of fuel to hurricanes crossing its path.

Some evidence suggests that starved of this fuel, there may be less hurricanes battering the US.

In Europe, not only will winters become much colder but summer droughts, storms and heatwaves will likely become more common.

A study published last year looked at how the cessation of the AMOC may impact the UK specifically.

University of Exeter researchers made a computer model and looked at what would happen if the AMOC reached tipping point by the middle of this century.

They found that by 2080 the weather would be 3.4°C colder than it was last year.

Rainfall during the growing season is expected to drop by 123mm, they add.

This, Ars Technica reports, is enough to reduce the UK’s arable land from 32 percent to just seven percent.

When the AMOC slowed down in the middle of the 19th century it led to the Little Ice Age where temperatures were so low the River Thames froze over. 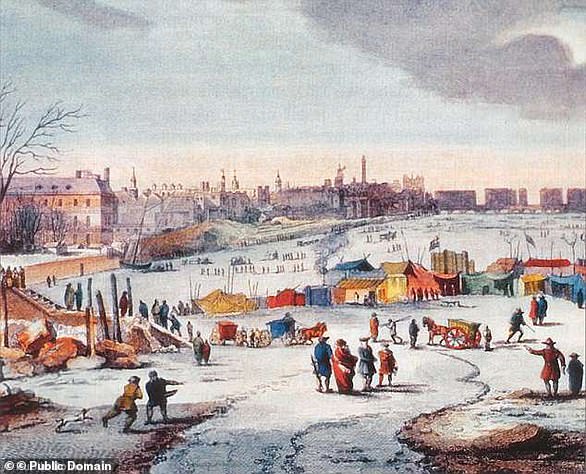 The Little Ice Age, a centuries-long cold period that lasted until about 1850. Experts believe that as the North Atlantic began to warm near the end of the Little Ice Age, freshwater disrupted the system. Pictured is Thames Frost Fair, 1683–84, by Thomas Wyke

Andrew Meijers, Deputy Science Leader of Polar Oceans at British Antarctic Survey, who was not involved in the study, said: ‘This work provides new long term context and reveals that prior to the era of human induced climate change the Atlantic overturning circulation was relatively stable and stronger than it is now.

‘This indicates that the slowdown is likely not a natural change, but the result of human influence.

‘The AMOC has a profound influence on global climate, and particularly in North America and Europe, so this evidence of an ongoing weakening of the circulation is critical new evidence for the interpretation of future projections of regional and global climate.

‘Additionally, the AMOC is frequently modelled as having a tipping point below some circulation strength, a point at which the relatively stable overturning circulation becomes unstable or even collapses.

‘The ongoing weakening of the overturning means we risk finding that point, which would have profound and likely irreversible impacts on climate.’

The study was published in Nature Geoscience.