GPs have been told to use a sixth dose of Pfizer’s Covid-19 vaccine by the NHS, after it emerged yesterday that its vials contain an extra shot of the jab.

Britain’s medical regulator says every vial – the small glass container which holds the liquid vaccine – holds five doses, administered in 0.3ml shots. But it admitted that once the vaccine is diluted before being given out, a vial holds as much as 2.25ml – enough for seven and a half doses.

Doctors and nurses administering the vaccine have now been told to use one of the extra doses ‘at their discretion’, in a weekly webinar with NHS England.

Where is the Delta plus variant right now? ALL countries with infections

The sixth dose will boost the amount of vaccine available in the UK by 20 per cent, allowing an extra 160,000 people to get the shot with the 800,000 delivered this month alone. It could also mean up to 8million more people could be vaccinated using the Pfizer jab once the UK receives its total order of 40million doses.

The UK Medicines and Healthcare products Regulatory Agency (MHRA) confirmed to MailOnline yesterday that ‘small’ amounts of the jab are going unused, and that the vials contain extra in case of spills and because some gets stuck in the syringe.

It insisted, however, that ‘additional product is not being wasted’ because the extra liquid was never intended to be used and is only there as a backup.

Pfizer says it overfills the vials to protect against mishaps such as spillages during transport, and to ensure that the five doses promised in each vial can be extracted for vaccination.

Pharmacists in the US are already using the extra portions for patients, after its regulator approved the extra doses to be administered.

As many as 200 centres in the UK are already ready to start administering the vaccine, the health secretary said. Pictured is a man getting the jab yesterday in Manchester

These were asking people to press a number on their keypad or text back to confirm they wanted the vaccine, which may result in a charge being applied to their phone bill.

‘In other cases, callers are offering the vaccine for a fee or asking for bank details, a spokesman said.

The vaccine is free and is only being offered by the NHS, they said.

‘The NHS will never ask you to press a button on your keypad or send a text to confirm you want the vaccine, and never ask for payment or for your bank details.’

The jab is being rolled out by the NHS across the UK, with those over 80 and healthcare workers first in line to receive it.

Once this group has been vaccinated it will then be offered to those over 50.

The NHS asked everyone to wait their turn to receive the vaccine.

When each vial arrives at a doctors’ surgery or vaccination centre it contains 0.45ml of the Pfizer jab, instructions released by the MHRA reveal.

This must be mixed with 1.8ml of a sodium chloride solution – salt dissolved in water – before it can be administered.

It is normal practice for a vaccine to be mixed with a solution before it is administered – to ensure it is at the right concentration.

Because the injection is delivered in 0.3ml doses, the 2.25ml of liquid can theoretically provide seven and a half shots of the vaccine.

A Pfizer spokesman said each vial contains ‘at least’ five doses, but the amount leftover can vary depending on the type of needles and syringes used.

‘At this time, we cannot provide a recommendation on the use of the remaining amount of vaccine from each vial; this is a matter for regulators to advise on,’ they added.

It is thought that regulators are only recommending one extra dose is extracted because they can’t guarantee there will be a seventh available.

On the call with NHS England, pharmacists warned there was ‘no guarantee’ there would be enough vaccine to administer a sixth dose again in three weeks time when patients receive a booster shot, the Telegraph reports.

Dr Elliot Singer, a GP in Waltham Forest, London, told the publication the advice meant ‘you cannot afford to waste a single drop, but there is an inaccuracy in syringes’.

GP surgeries are understood to be drawing up last-minute call lists for people who could come for jabs if there were some leftover, and also using any spare to vaccinate frontline workers.

They have been told to keep wastage at five per cent, despite having just three and a half days to deliver the 975 thawed doses of the vaccine.

Before the NHS shifted its guidance last night, Dr John Allingham – medical director at the Kent local medical committee – said ‘at the moment, you could argue that we are wasting one sixth of potential stock’.

Almost 140,000 people have already received their first of two injections of the jab, the vaccines minister Nadhim Zahawi claimed on Wednesday.

American pharmacy expert Erin Fox, from the University of Utah, told Politico it was normal for manufacturers to overfill vials to safeguard against spills and waste.

‘It’s pretty unusual to have a full extra dose or more though – but it does seem to be there!,’ she said. 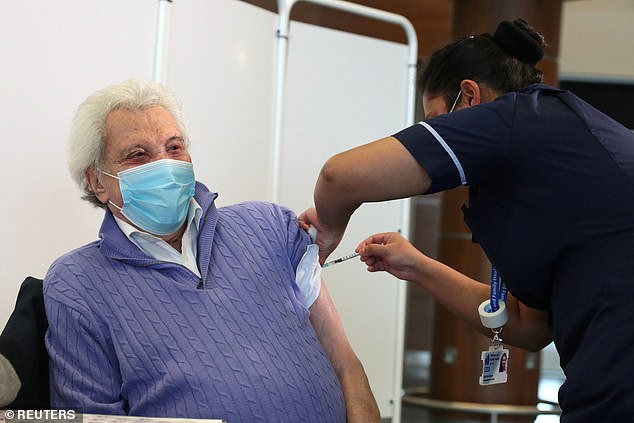 Each vial could contain two extra doses of the vaccine, it was revealed yesterday. Above is entertainer Lionel Blair, 92, getting his vaccine in Epsom, Surrey, on Wednesday

The Health Secretary Matt Hancock told the Commons yesterday that as many as 200 GP surgeries and vaccine centres in the UK are already delivering the vaccine ‘bringing hope to communities over the coming days’.

‘And I know everybody would be as thrilled as I am every time they’re contacted by a friend or a loved one getting the jab,’ he said.

‘It was a wonderful sight to see the global map of vaccine deployment with the UK proudly standing out as the sight of the first vaccinations.

‘It’s a huge logistical challenge, but the vaccine offers us promise of a better year ahead and until the great endeavour of deployment reaches enough people to make this country safe we must keep doing what it takes to protect our NHS and protect those we love.’

The US-based Food and Drug Administration said on Wednesday that extra doses left in the vials of the Pfizer vaccine could be used.

A spokesman told Politico: ‘Given the public health emergency, FDA is advising that it is acceptable to use every full dose obtainable.’

The UK has ordered 40million doses of the vaccine – enough to inoculate a third of the country – which are all expected to have arrived by next year.

It became the first country in the world to start vaccinating against the virus last week, after the jab got the green light from regulators.

It is expected that the Oxford coronavirus vaccine could be approved in the coming days, adding another 100million doses to the UK’s arsenal for beating the virus.

The award for international statistic of the year has gone to 332 – the number of days it took to produce a Covid-19 vaccine.

The Royal Statistical Society said the rapid turnaround was a source for hope in a year dominated by virus figures.

The UK statistic of the year was more sombre – 17,750 was the number of excess deaths in April in care homes in England and Wales over just four weeks in April.

RSS boss Stian Westlake said: ‘Covid has made statisticians of us all. Good statistics cut through confusion and spin and help us understand what’s really going on.’