Lily James has ‘cancelled her appearance on the Today show’ after she appeared to passionately kiss Dominic West while dining during a trip to Rome last Sunday.

The Mamma Mia! star, 31, was set to appear on the NBC show to promote her new Netflix drama Rebecca alongside her co-star Armie Hammer, 34, on Monday.

However the actress, who stars as the lead in the Daphne Du Maurier adaptation, and Armie are understood to have pulled out of the show, a NBC source told Page Six.

Plans: Lily James, 31, has ‘cancelled her appearance on the Today show’ after she appeared to passionately kiss Dominic West while dining al fresco during a trip to Rome last Sunday

MailOnline has contacted Lily’s and Armie’s representatives for comment.

It comes after Lily and the married actor Dominic West, 50, put on a very cosy display by ‘kissing and cuddling’ during their British Airways flight to Rome, it has been claimed.

Now a source has claimed that the pair wasted no time in kicking off their romantic weekend and were ‘all over each other’ while travelling, reports The Sun.

A source told the publication: ‘At first, I thought she was his daughter, as I knew he was around 50 and you could tell she was a lot younger.

‘Within minutes of the plane leaving, they began kissing and cuddling after both removed their masks.

Shock: Dominic West and Lily James put on a very cosy display by ‘kissing and cuddling’ during their British Airways flight to Rome, it has been claimed (pictured during their trip to Italy)

‘They looked like a couple heading for a dirty weekend and they were all over each other. They were French kissing and there was a lot of necking going on.’

MailOnline has contacted representatives for Lily and Dominic for a comment.

It comes as Rebecca star Armie Hammer has applied for joint custody of the two children he shares with his estranged wife Elizabeth Chambers.

The couple, aged 34 and 38 respectively, announced they were separating in July and share two children Harper, aged five, and Ford, aged three.

The Blast reports that legal papers show that Armie is requesting Elizabeth and the children return from the Cayman Islands to LA so an arrangement can be sorted after he had not seen his kids for months due to the pandemic. 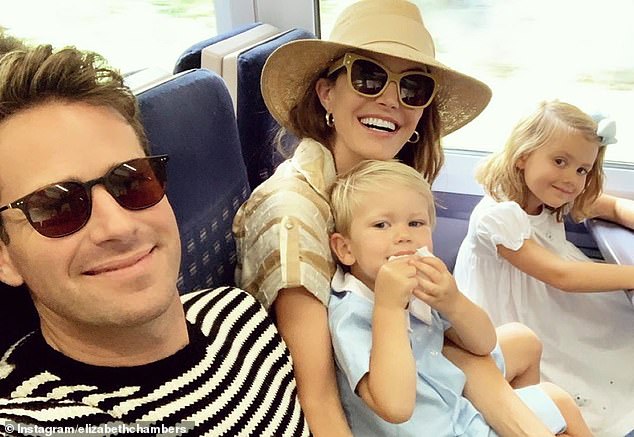 Happier times: Armie Hammer has applied for joint custody of the two children he shares with his estranged wife Elizabeth Chambers

The site reports: ‘As the coronavirus pandemic worsened in the United States, Elizabeth and Armie elected to stay with their children temporarily in the Cayman Islands where the pandemic appeared to be under greater control…

‘Armie returned to Los Angeles this past July, with a promise from Elizabeth that she and the children would follow shortly thereafter….

‘To date, however, Elizabeth and the children remain in the Cayman Islands and Armie has not seen the children in several months now.’

MailOnline has contacted a representative for Armie for comment.

After arriving in the city last week, Lily and Dominic surprised onlookers when they were pictured appearing to kiss while dining al fresco.

Claims: A source said Dominic and Lily ‘looked like a couple heading for a dirty weekend and they were all over each other’ during the flight (pictured together in 2018)

Dominic is best known for playing Noah Solloway in Showtime drama, The Affair, which explores the emotional effects of an extramarital relationship between his character and a younger woman, named Alison Bailey (Ruth Wilson).

A source told MailOnline Dominic and Lily spent two nights in a suite at the top Hotel De La Ville with a panoramic view over the city and just at two minutes walk from the Spanish steps.

They only left the hotel for a few hours riding an electric scooter around the Spanish Steps and Piazza di Pietra. While for lunch they joined their friend and mutual manager Angharad Wood at a downtown restaurant.

At the end of lunch Lily sat next to Dominic, who wasn’t wearing his wedding ring, and he couldn’t resist nuzzling her neck and stroking her.

The previous Thursday, it was announced that Lily had split from The Crown star Matt Smith, 37, for good after a failed attempt to rekindle their relationship in lockdown following an on-off five year romance. 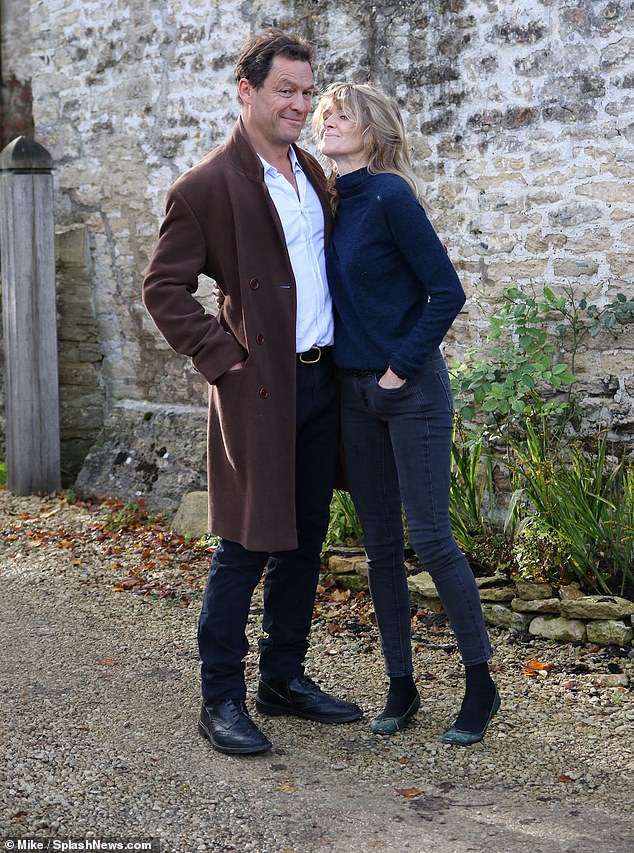 Married: Dominic and his wife Catherine FitzGerald put on a united front at their home after the pictures came to light

Since the pictures of Dominic and Lily in Rome came to light, he has put on a defiant display with his wife Catherine Fitzgerald, 49.

Just hours after she told friends she was ‘heartbroken’ over the images, which went viral, she agreed to take part in a bizarre show of unity with The Affair star, with him telling reporters: ‘Our marriage is strong and we’re very much still together’.

The mother-of-four gingerly stepped out of the marital home in Chippenham, Wiltshire, on Tuesday with her husband, hiding her ring finger in her jeans pocket.

Catherine purposefully raised her head and passionately kissed Dominic for the cameras, as they emerged from their rambling cottage, through a rusty gate.

Dominic appeared to have a rather smug look on his face as he made a point of showing that he was still not wearing his wedding ring. He wore the same outfit he wore on his day out with Lily, adding a brown jacket.

With fixed smiles planted on their faces, he and Catherine handed photographers a piece of paper, which repeated the words in his handwriting: ‘Our marriage is strong and we’re very much still together’, with their signatures placed underneath.

Strong: Dominic has been married to Irish landscape designer and mother-of-four Catherine since 2010. They share children Dora, 13, Senan, 12, Francis, 11, and Christabel, seven

Working together: Lily and Dominic are set to star in Emily Mortimer’s adaptation of Nancy Mitford’s celebrated novel The Pursuit Of Love for the BBC featuring Emily Beecham & Andrew Scott – filming began in July

MailOnline understands the actor flew back from Rome on Monday night for crisis talks with his wife of 10 years, just hours after she told a friend she was ‘heartbroken, shocked and devastated’ after the pictures.

Dominic has been married to Irish landscape designer and mother-of-four Catherine since 2010.

On Monday, Catherine confided in a friend that she and Dominic were still ‘very much together’ at the time of his steamy clinch with Lily, and she had said she considered the marriage to be ‘probably over’.

A female friend who came to console Catherine told MailOnline that she has was ‘devastated’ over the pictures because she thought she and Dominic had a ‘good marriage’.

The friend told MailOnline on Monday: ‘Catherine has seen the pictures and she’s devastated. I came over to speak with her as soon as I knew about them.

Done and dusted: Last Thursday, it was announced that Lily, 31, had split from Matt Smith, 37, for good after a failed attempt to rekindle their relationship in lockdown following an on-off five year romance (pictured in 2015)

‘Catherine has been trying to speak with Dominic but he’s not answering his phone. She’s totally shocked because she didn’t know anything was going on. They were very much together, so this is completely out of the blue.

‘She thought they had a good marriage and now it’s probably over. That’s how she feels right now but the two of them need to speak but at the moment, she’s lost for words.’

Lily and Dominic are set to star in Emily Mortimer’s adaptation of Nancy Mitford’s celebrated novel The Pursuit Of Love for the BBC featuring Emily Beecham & Andrew Scott and filming began in July.

The three part romantic comedy-drama about love and friendship is filming on location in the Bristol and Bath area and at The Bottle Yard Studios.

Set in Europe between the two World Wars, the story follows the adventures and misadventures of the charismatic and fearless Linda Radlett, played by Lily and her best friend and cousin Fanny Logan, played by Beecham.

But the pair go way back and starred in Othello together at Sheffield’s Crucible back in 2011. Lily played Desdemona when she was 22 and Dominic played Iago, aged 41.