Check into the 10 best haunted hotels in the country

Some guests never checked out at these hotels

Note from 10Best: Someday, we’ll all be ready to pack our suitcases again and head out on our next adventures. In the meantime, we’ll keep supporting the places that inspire us. Please check individual hotel websites for the latest updates.

Ghostly apparitions, faucets turning off and on, flickering lights, and eerie sounds are just a few of the things you may encounter at one of these hotels, where certain guests have checked in but never checked out. Twenty nominees were selected, and the 10 best haunted hotels were chosen by 10Best readers via popular vote.  Scroll to see the winners. 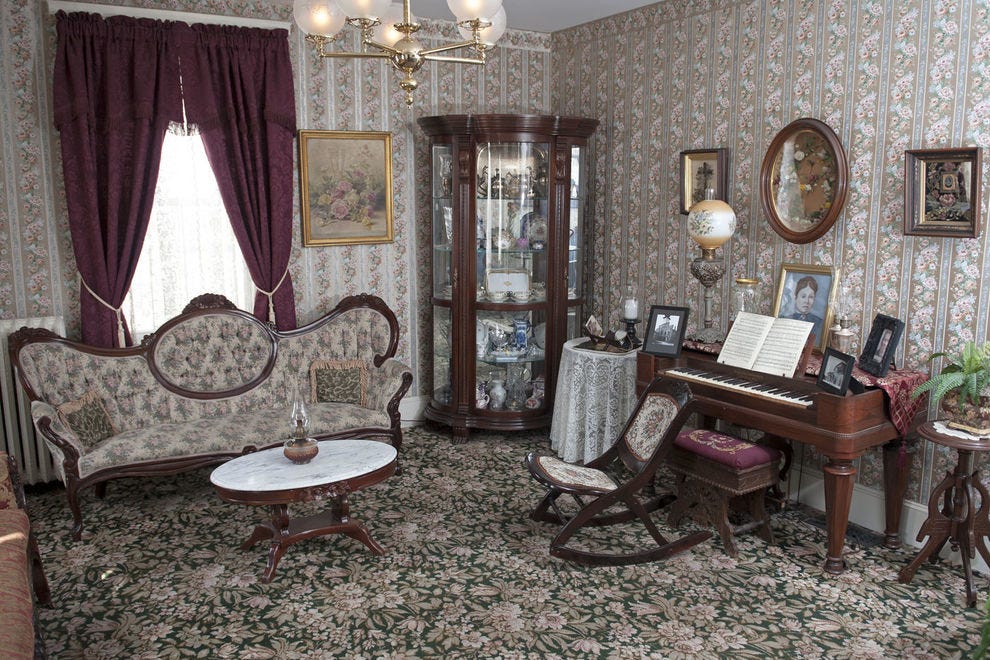 The museum and B&B in Fall River, Massachusetts has a gruesome history. The house was the site of unsolved murders: the hatchet killings of a man and his wife, and even the decapitation of a cat in the basement. Visitors to the B&B can choose from six rooms and suites that they may or may not be sharing with the spirits of the departed. 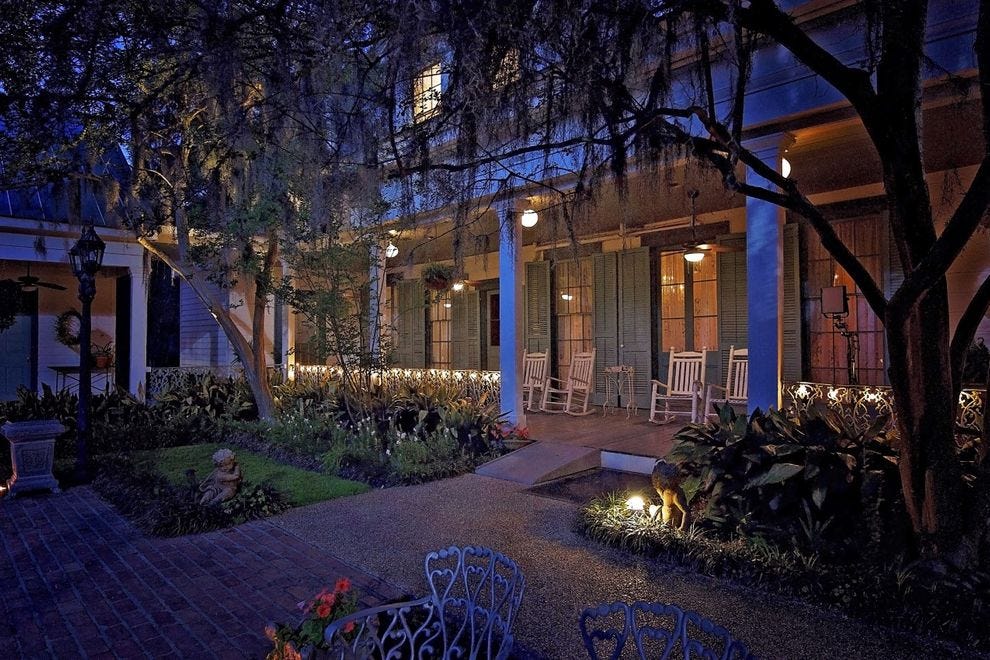 Photo courtesy of The Myrtles Plantation

Ghosts that supposedly visit the Myrtles Plantation in Louisiana have been captured on film. This dramatic mansion calls itself one of America’s most haunted houses and organizes historic and mystery tours every day. 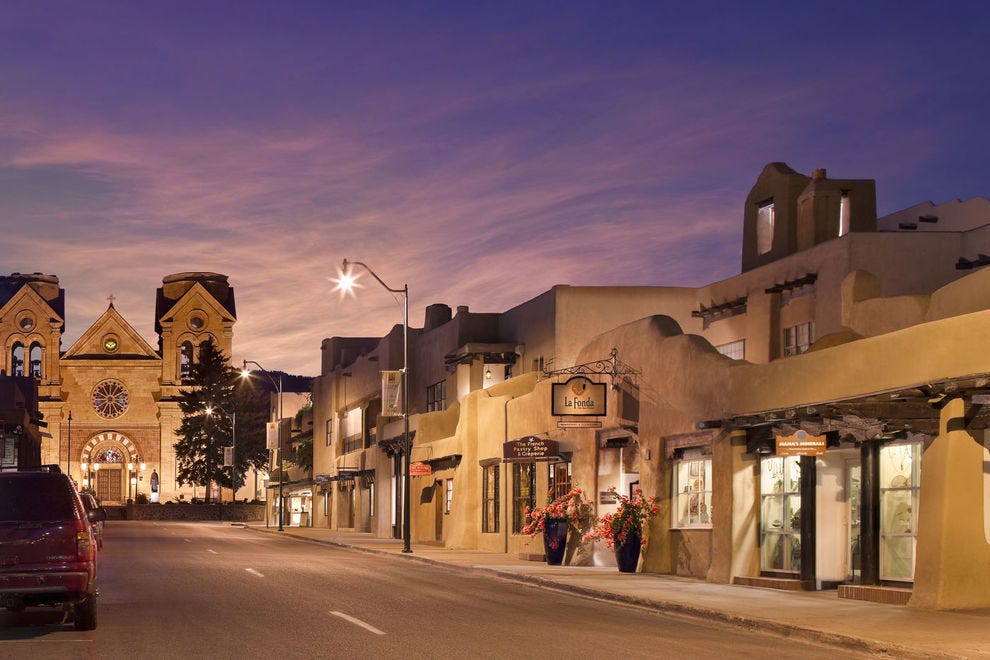 Photo courtesy of La Fonda on the Plaza

The original building of La Fonda on the Plaza in Santa Fe once served as a courthouse where felons where hanged. Today, many guests report the presence of ghosts from the Wild West – criminals, victims of shootouts and suicides from fortunes lost – especially in the main dining room and third floor restaurant. 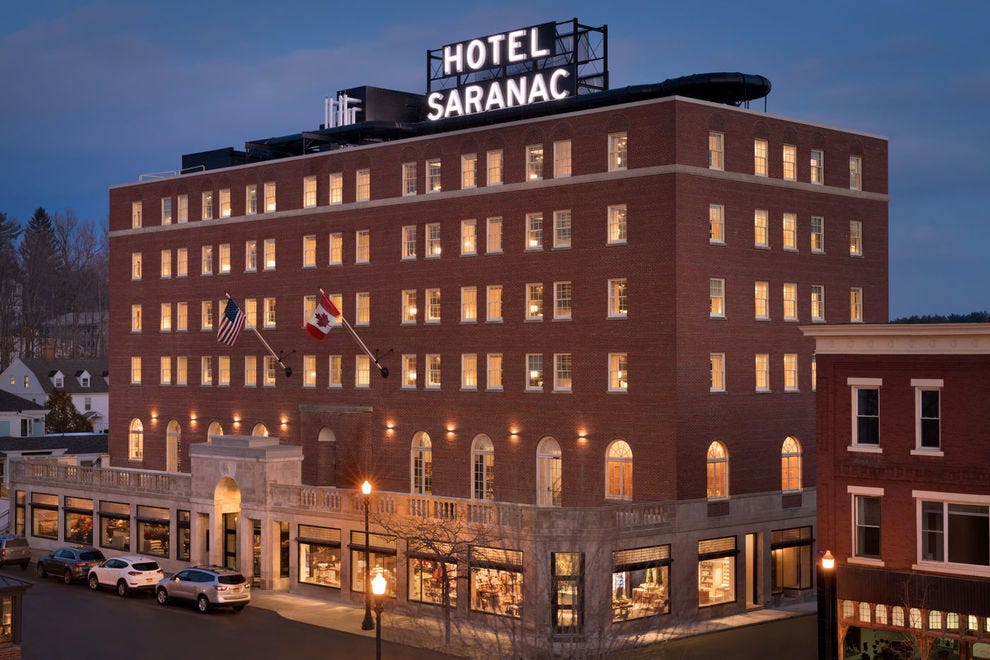 This historic hotel in the Adirondacks, located on the ground of a former local high school, dates back to the Roaring Twenties. According to local reports, the spirit of Howard Littell, the school’s superintendent, still roams the property. Other sightings include a young girl on the fourth floor, spectral singing on the sixth floor and mysterious scratching sounds on the third floor. 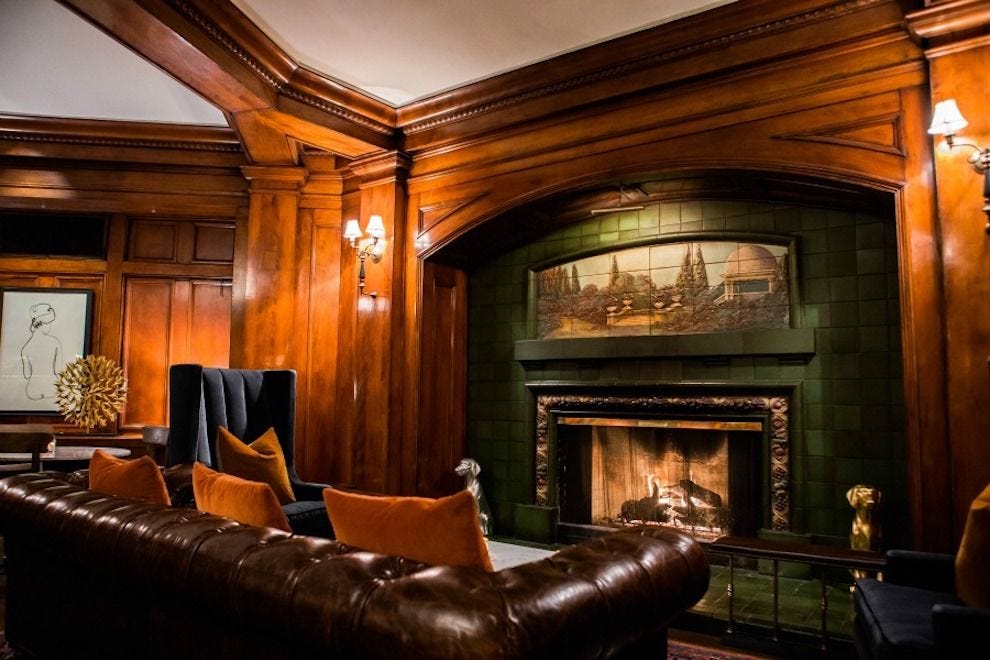 Some guests of Seattle’s Hotel Sorrento have never checked out, including the spirit of Alice B. Toklas. Other occurrences include a mysterious piano playing in the penthouse suite and a strange presence within and just outside room 408. 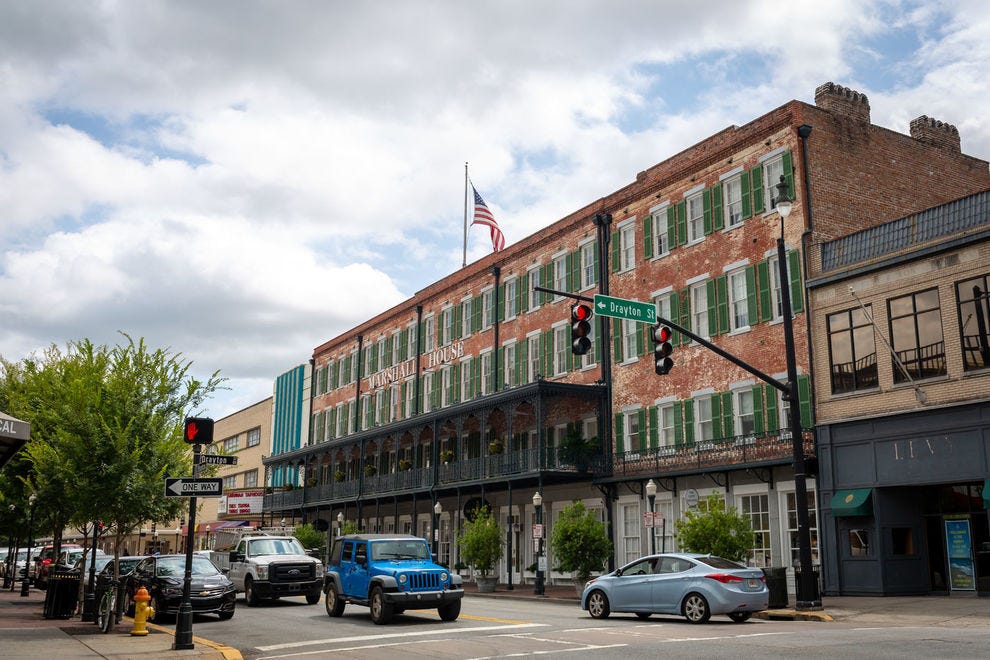 Photo courtesy of The Marshall House

No. 5: The Marshall House – Savannah, Georgia

Savannah is the oldest city in Georgia and comes with its own share of ghost stories, but the Marshall House tops them all. This historic hotel opened in 1851 and was used three times as a hospital. One story claims a doctor buried amputated body parts under the floorboards because the ground was too frozen to dig. Stories abound, from ghost sightings in the hallways to faucets turning on by themselves. 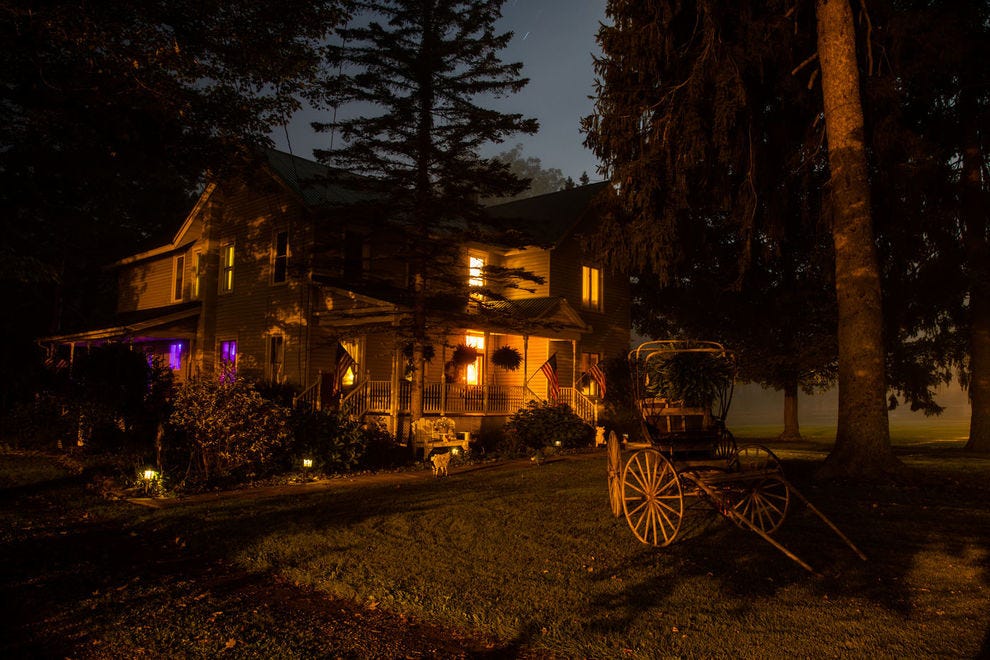 Guests of this former railroad hotel built in the late 1800s have reported numerous ghostly encounters, like being woken in the night by voices or seeing two women sitting for tea in the Fainting Room. Others report hearing footsteps on a staircase that doesn’t exist or finding a child-sized chair next to the bed in the Nubian Room. 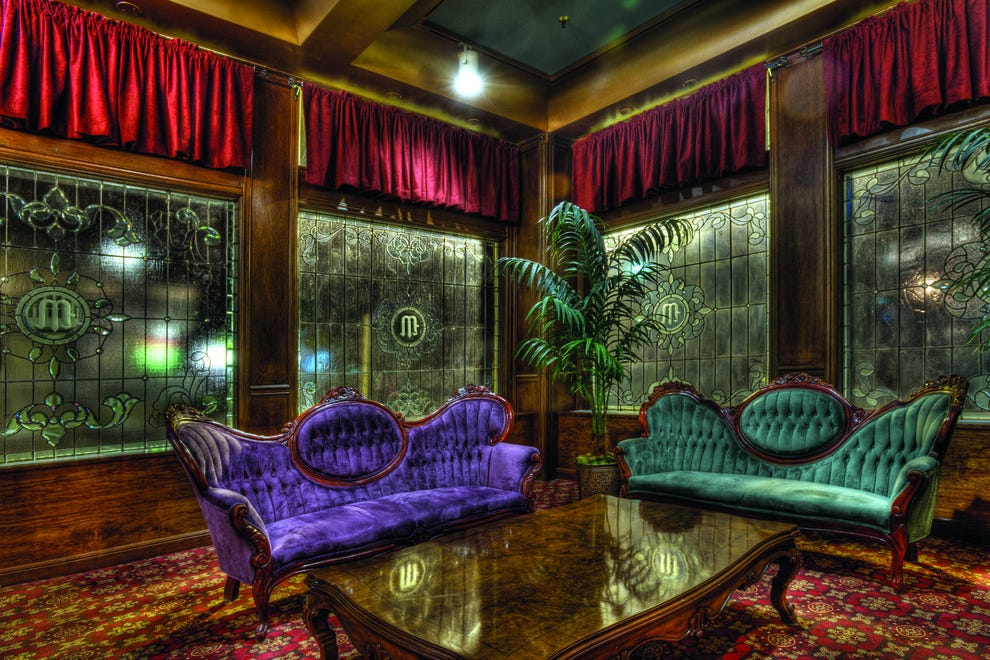 No. 3: The Mizpah Hotel – Tonopah, Nevada

Built in 1907, the Mizpah Hotel in haunted Tonopah has many spirits supposedly roaming its halls, including Rose, a prostitute murdered by a jealous gambler. Guests report items that mysteriously move and an old elevator whose doors randomly open and close. 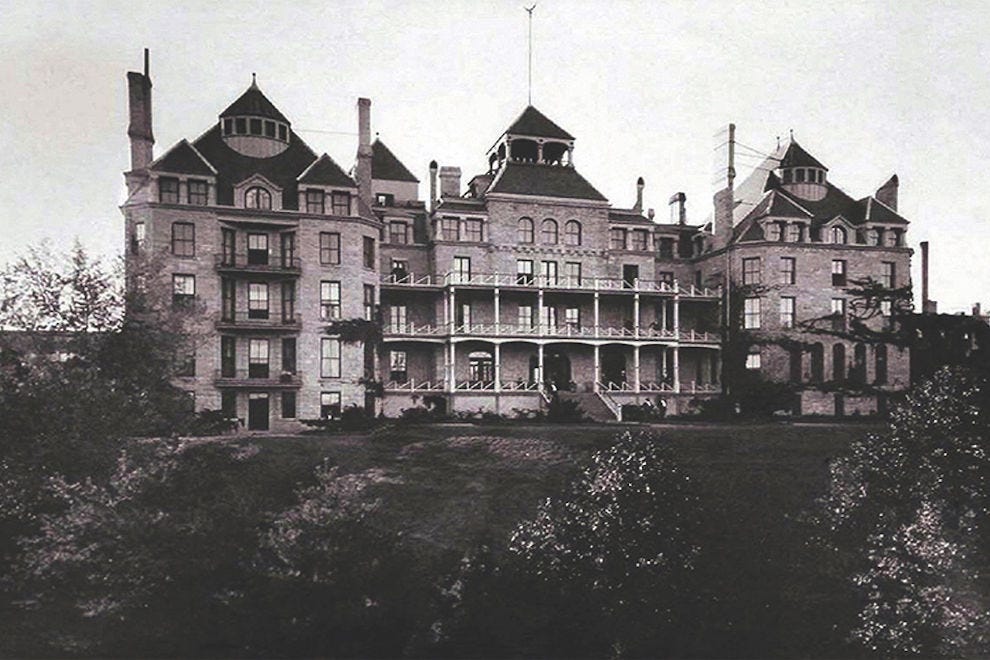 Guests who want an extra scare can take a nightly ghost tour of this historic Victorian-style hotel that claims to be “America’s most haunted hotel.” Visitors at the 1886 Crescent Hotel & Spa, a member of Historic Hotels of America, can watch ghost videos, learn about Eureka Springs’ unusual history and go on a massive ghost hunt during the Eureka Springs Paranormal Weekend, a three-day, hands-on paranormal investigation event in January. 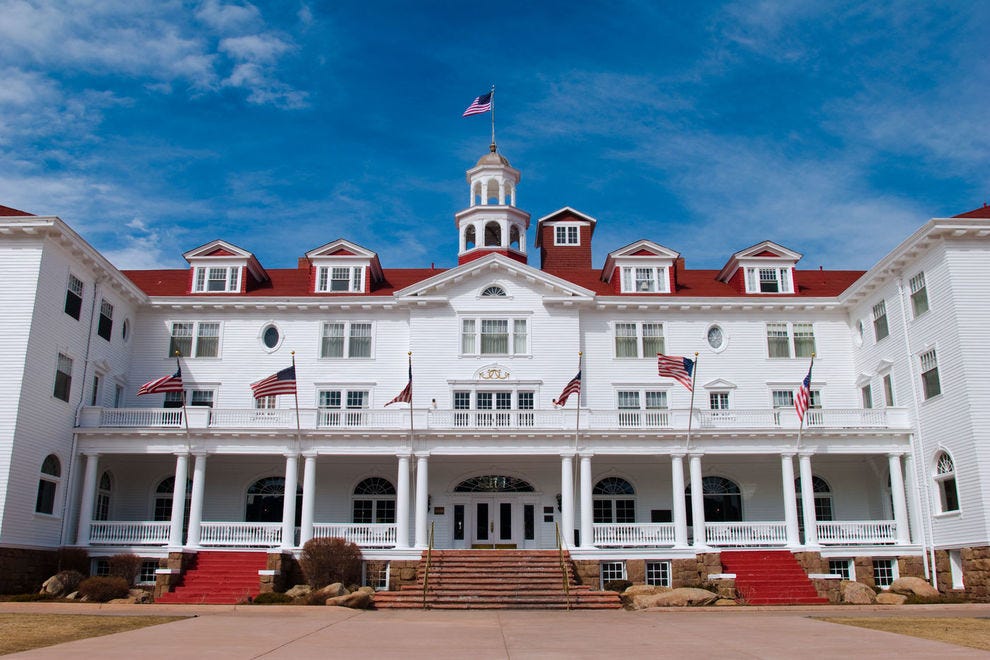 This dramatic, massive white hotel seems to rise out of the Colorado mountains in the otherwise quaint and old-fashioned tourist town of Estes Park. A member of Historic Hotels of America, The Stanley Hotel’s haunted history stretches far back, but it became famous in the ‘70s after author Stephen King visited.

He set the scene for his best-selling book (and the subsequent movie), “The Shining,” at the Stanley. Today, guests visit the hotel to see the long, spooky hallways and listen to “Redrum.” The hotel organizes a special Ghost Adventure Package, complete with a room on the scary fourth floor. 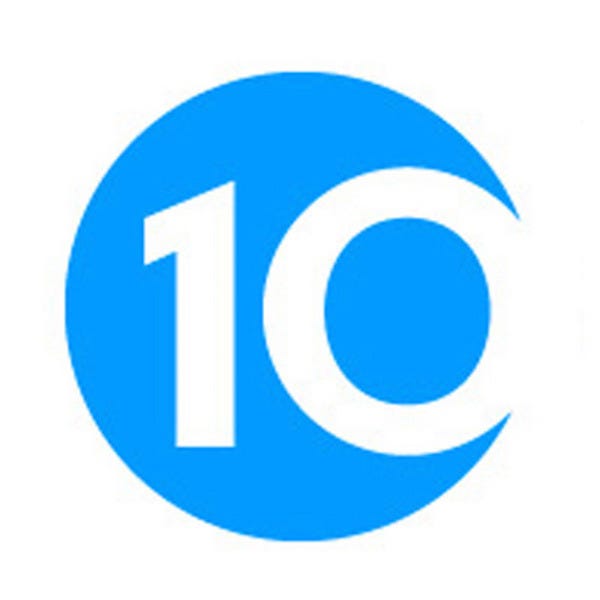 10Best.com provides users with original, unbiased and experiential travel coverage of top attractions, things to see and do, and restaurants for top destinations in the U.S. and around the world.

10Best.com provides users with original, unbiased and experiential travel coverage of top attractions, things to see and do, and restaurants for top destinations in the U.S. and around the world.