Maple syrup sweetens up everything from breakfast to desserts and even cocktails! — Photo courtesy of Getty Images / showcake

Quebec has set a new record for maple production this year, which is major considering that in years past, this Canadian province was responsible for producing 72% of the world’s supply of maple syrup.

Though maple syrup from Canada is of high quality and high quantity, not all artisan maple syrup comes from the Great White North. Small batch maple syrup producers throughout the United States are tapping into the industry and they’re in places that you’d least expect!

The farm also produces their own small-batch maple syrup. They use the traditional method of wood-firing their syrup, which cooks it while adding a caramelized, subtly smoked flavor. Everything is sustainably produced, utilizing agricultural practices that work with nature. 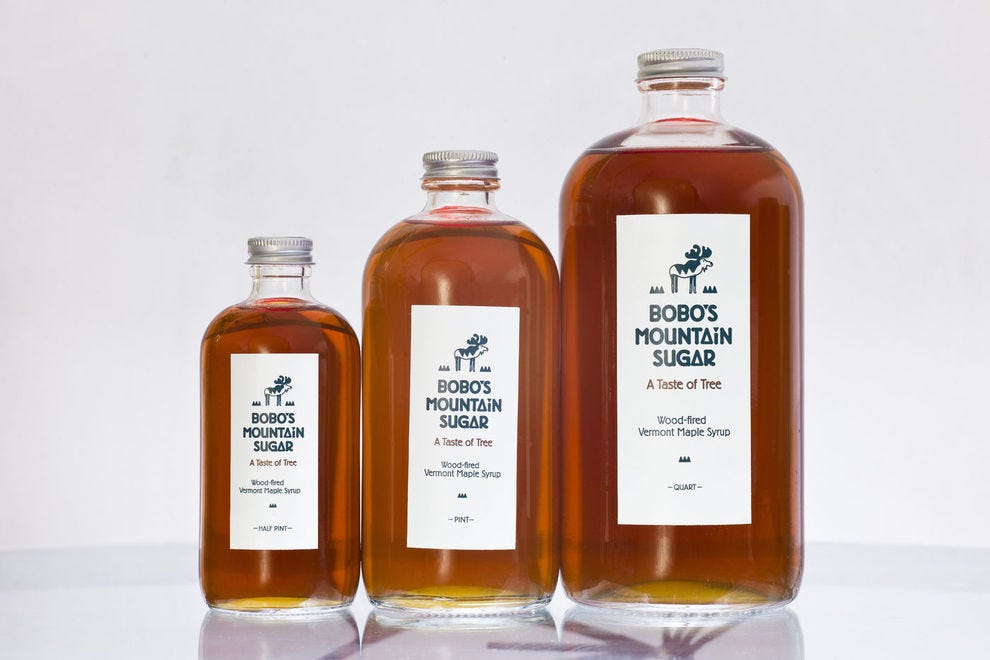 From the sap to the wood-fired evaporation technique, Bobo’s Mountain Sugar gives people a taste of a tree — Photo courtesy of Skye Chalmers

Second to Canada’s maple syrup fame is Vermont, which produces more maple syrup than any other state in the U.S. Bobo’s Mountain Sugar in the hills of Weston, Vermont, gives maple syrup lovers a taste of what the Green Mountain State has to offer.

Like a fine wine, Bobo’s Mountain Sugar is defined by its terroir – a bedrock rich in limestone, shale and granite deposits – and its wood-fired processing. 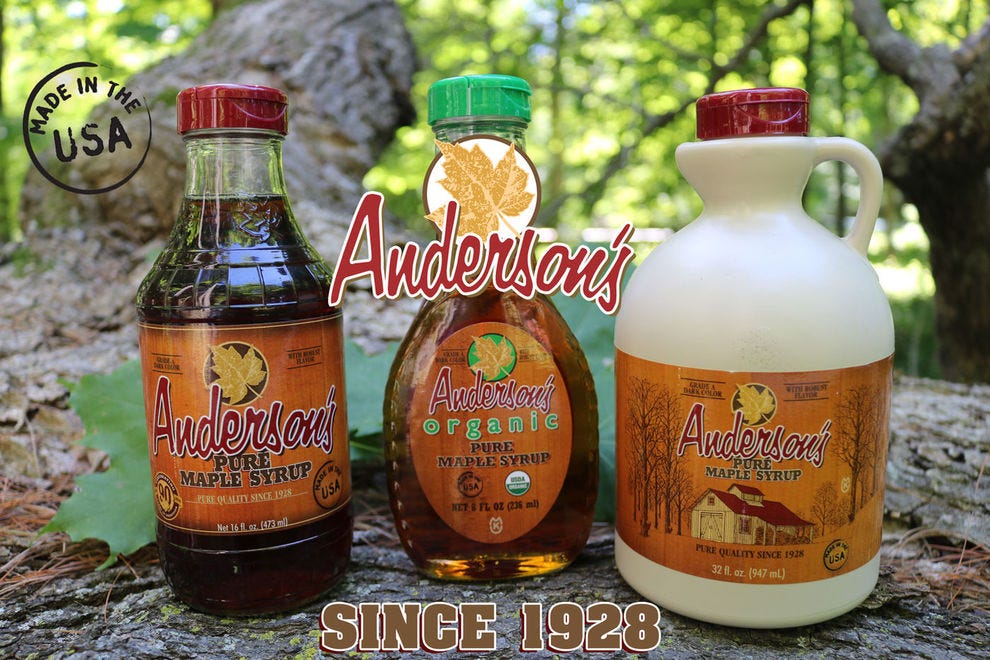 Wisconsin is mostly known for its cheese and dairy production, but word should get out about its maple syrup. Anderson’s Maple Syrup has been sweetening up breakfast pancakes since 1928 and has become a family tradition for three generations.

As the name says, nothing is added to Anderson’s Maple Syrup – it’s pure! It’s the delicious sap made straight from their Wisconsin maple trees. 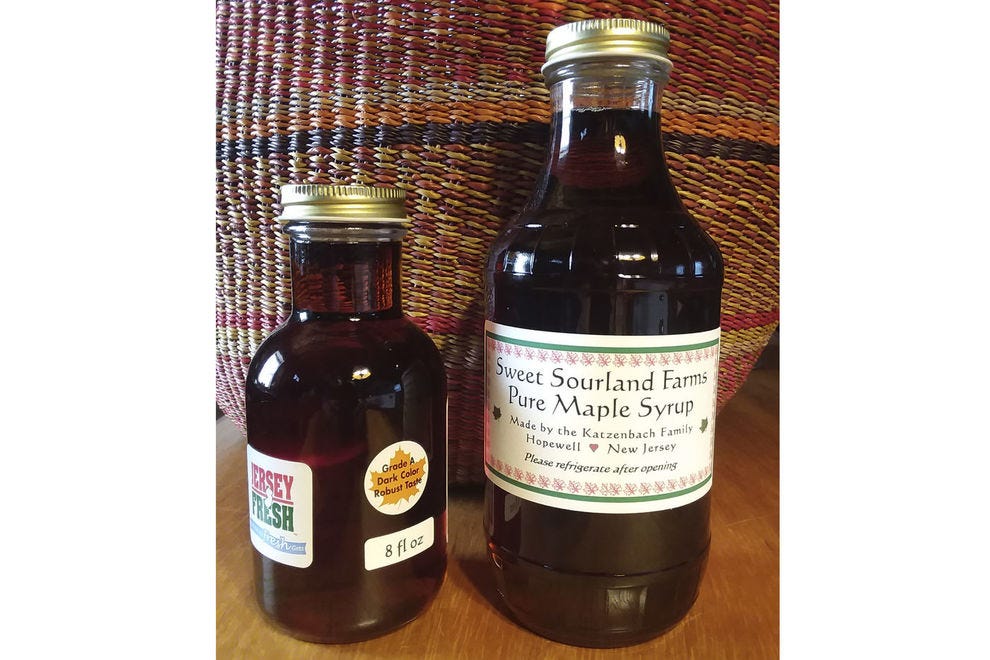 The Garden State is more than just Jersey Fresh peaches, blueberries and sweet corn. Tapping over 300 red maples and over 100 sugar maples, Sweet Sourland Farms produces a modest haul of 80 to 125 gallons of maple syrup. So if you want a taste of Jersey’s take on maple syrup, you have to act fast because Sweet Sourland Farms does sell out! 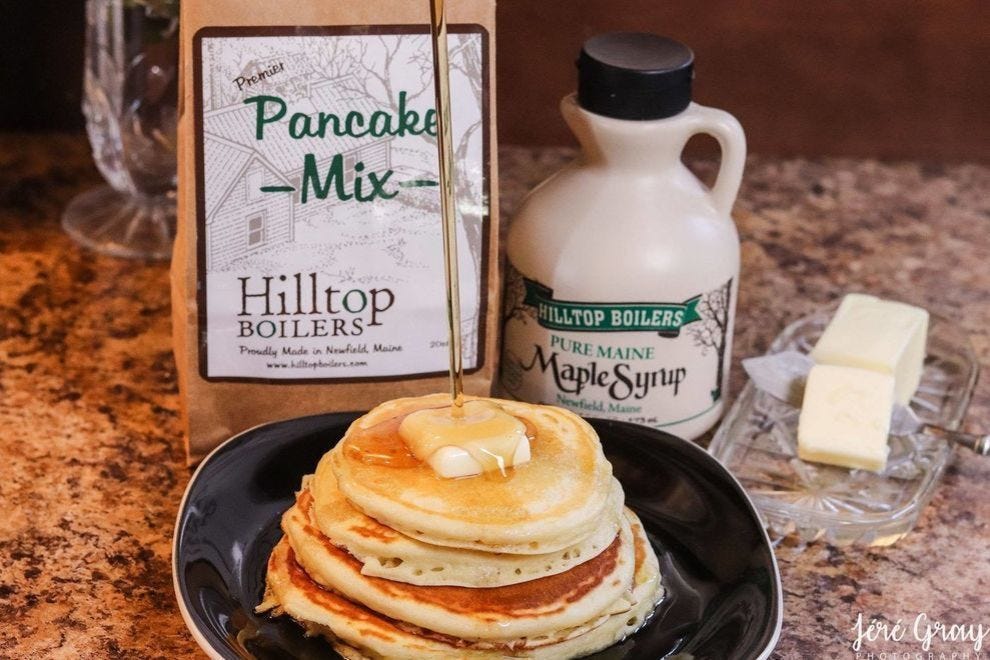 Maple trees can withstand a wide range of climates, but they thrive best in cooler temperatures. So it’s fair to assume that most northern states, especially ones that border Canada, like New York and Vermont, tend to produce more maple syrup than other states.

And that’s the reality in Maine as well, which is the 3rd leading maple syrup producer in the United States. To get a taste of Maine’s maple syrup, try the award-winning Hilltop Boilers Maple Syrup. The owner has spent his entire life in a sugarhouse and knows nearly everything there is to know about sugaring.

Their passion for maple syrup goes beyond just syrup you enjoy at breakfast. They also make maple candies, maple lip balm and even maple mustard.

In order to be legally called maple syrup in the state of Pennsylvania, the syrup needs to have at least 66% sugar content. Triple Creek Maple Products proudly touts that their maple syrup is thicker and sweeter than state law requires – with a sugar content at an average of 67%.

To increase its sugar content, this maple syrup is boiled longer, evaporating even more moisture out of the sap, so all that is left is a thick, sugary maple syrup.

The Bissell family has been making maple syrup since the late 1800s. Six generations later, the Bissells have an established sugarhouse just outside of Rock Creek, Ohio where they’ve got around 1,500 trees tapped to harvest the sweet stuff.

Their products are available at stores around the region and you can sample their maple syrup at a wide range of local restaurants and wineries.

The West Coast has a complicated history with the bigleaf maple. At the height of the timber industry, the native tree was chopped down to make way for the more favorable Douglas fir, which had trouble growing in the broad canopy of the bigleaf maple.

Years later, those passionate about sugaring have figured out that the bigleaf maple actually produces some pretty good maple syrup. Two hours north of Seattle, Neil’s Bigleaf Maple Syrup has been cooking up syrup since 2011.

Believe it or not, North Dakota also has a unique history in maple syrup, but instead of tapping maples, they tap the boxelder tree. The boxelder (aka Manitoba maple) produces a little less sap than its cousin, the maple tree, but the syrup produced has a buttery taste to it.

The best time to experience North Dakota’s box elder syrup is during the Maple Sugaring Days at Fort Stevenson State Park. The annual event has plenty of activities and treats that will engage all of your senses with the sweet taste of syrup.

Waterfall Farm is one of the southernmost commercial maple producers in the county, operating out of Warrensville, North Carolina. The sugar in southern maples tends to be lower on average than maple trees in the north. It’s watery and mildly sweet.

In 2020, they collected 7,000 gallons of sap from sugar and red maple trees and it was boiled down to 115 gallons of maple syrup with a sugar content of 66%.