What does a unicycle, a camera from Nasa’s space shuttle and a shrunken head all have in common?

Bizarrely, they are all items lost by airline passengers that, because they remained unclaimed, were sent by carriers to be resold by the Unclaimed Baggage Center – a 40,000-square-foot store in Scottsboro, Alabama, that houses millions of orphaned objects.

Here are some of the most bizarre items the company, which started in 1970, has ever processed…

An aluminized fire suit is one of the odd items found by the Unclaimed Baggage Center (stock image, not actual item)

The Unclaimed Baggage Center says one of its ‘hot’ finds was a shiny, silver aluminized fire suit used to shield firefighters from ambient heat. They are traditionally either used in factories (approach suits), aircraft fires (proximity suits), and situations where a firefighter must be fully engulfed in flames (entry suits).

The lost luggage company once received a ‘terrible-smelling’ bear pelt that had been packed in salt prior to travel. It notes: ‘Hunters and taxidermists salt animal pelts to preserve them after a hunt, but there are specific methods they must follow to do this successfully. It can take almost two weeks to properly cure an animal hide, so it’s possible this bear pelt had not been completely cured before it was lost in transit.’

CAMERA FROM THE SPACE SHUTTLE

A modified Nikon F camera from Nasa’s Space Shuttle programme is an item that the Unclaimed Baggage Center deems one of its ‘out of this world’ finds.

Designed in the late 1980s, the unique model was one of the earliest iterations of the digital camera – and only three were made. Because of its rarity, the company sent the camera back to Nasa. 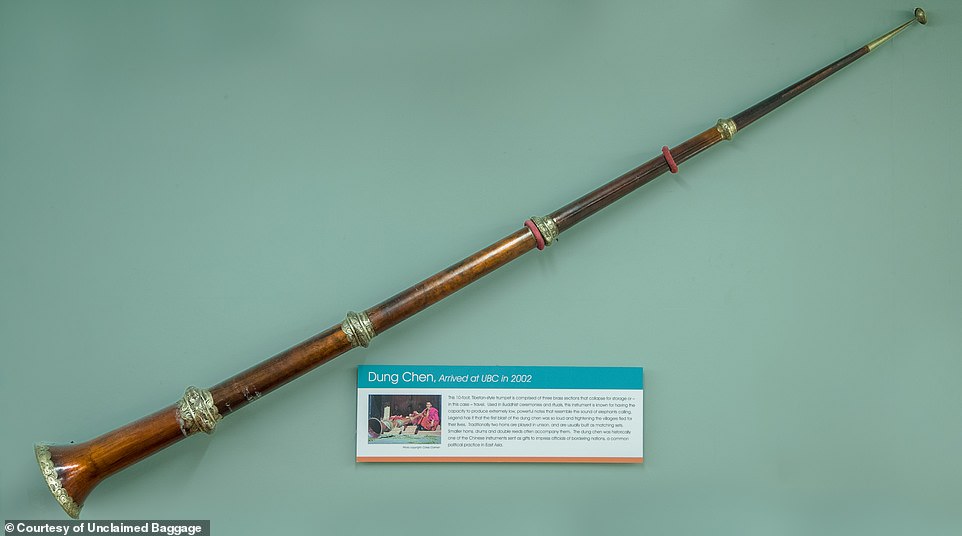 This ceremonial horn, actual item pictured, arrived at the Unclaimed Baggage Center in 2002

The company says: ‘They’re well-known for their low powerful notes that resemble an elephant’s call.

‘Historically, the dung chen was often given as a political gift by the Chinese to impress bordering nations. The dung chen is collapsible for easy storage and travel.’ 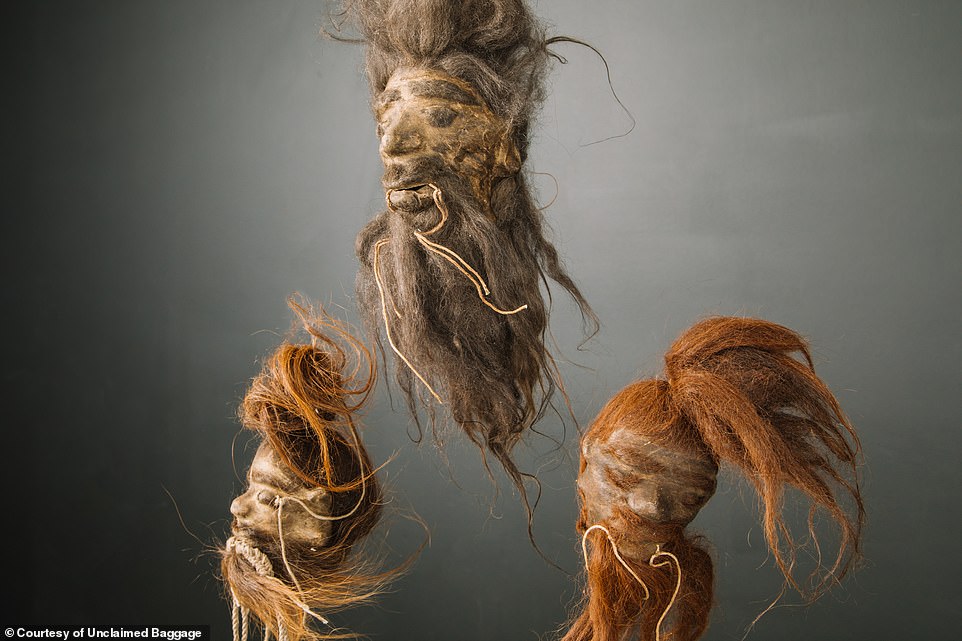 Shocking and bizarre: Three of the shrunken heads that Unclaimed Baggage has come across

Unclaimed Baggage says it has received several shrunken heads over the years, including one that served as decoration on a medicine-man stick.

It is unsure where this bizarre item came from but notes: ‘Headhunting has been documented only in the Amazon rainforest’s northwestern region (Ecuador and Peru). Tribes such as the Aguaruna, Huambisa, Achuar and Shuar have been known to shrink and collect human heads.’

One of the most ‘unique and incredible finds’ is an Egyptian burial mask.

The company reveals that the antique ‘arrived in a well-travelled Gucci suitcase that was filled with artefacts from the time of Moses – about 1500 BC’.

The find went on to be sold through a specialist sale at Christie’s auction house in New York City. 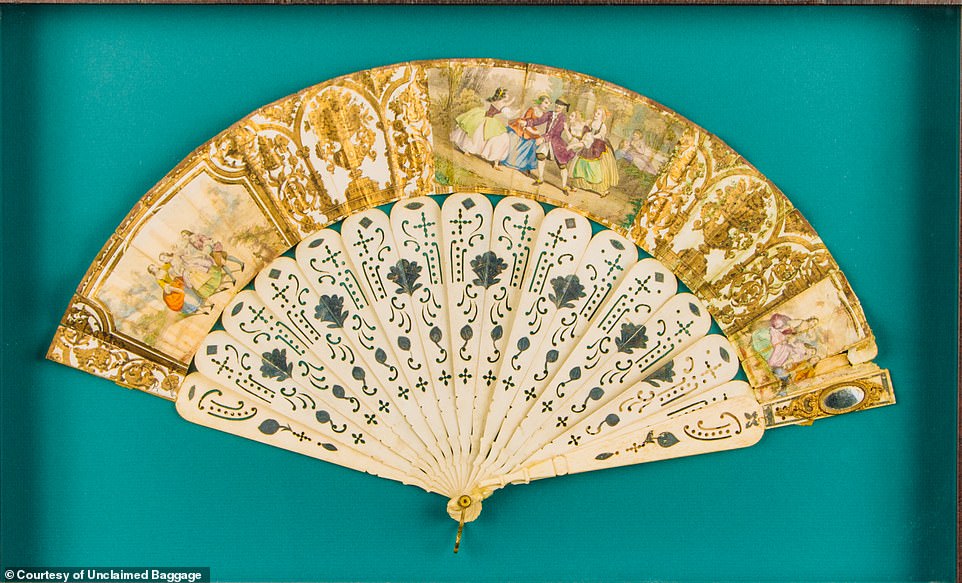 A ‘beautiful’, hand-painted ‘flirting fan’ from the Victorian period once turned up at Unclaimed Baggage. Gilded in gold and reinforced with intricately-carved bone, ladies throughout Europe used these fans to subtly communicate with men at social gatherings from the 16th to 19th centuries. The company adds: ‘A small “flirting mirror” in the fan’s top right corner allowed a lady to discreetly see whether her flutters were achieving the desired effect.’ 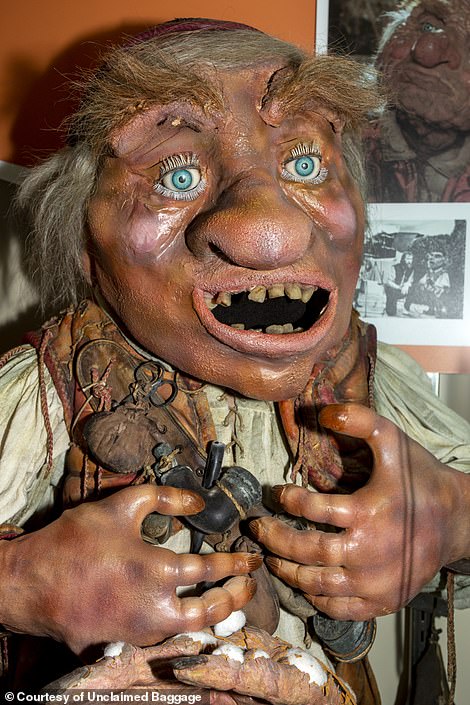 One of Unclaimed Baggage’s most well-known finds was a four-foot-tall goblin puppet known as Hoggle, a key character from the Jim Henson fantasy film Labyrinth. Actual item pictured

One of Unclaimed Baggage’s most well-known finds was a four-foot-tall goblin puppet known as Hoggle, a key character from the Jim Henson fantasy film Labyrinth. The character arrived at Unclaimed Baggage in a deteriorated condition, with the company noting that the materials used to build him ‘weren’t meant to last long-term’. He was ‘lovingly restored’ by doll artist Gary Sowatzka and the puppet now resides in the Unclaimed Baggage store entryway, where he ‘greets thousands of guests every year.’

Unclaimed Baggage has found many ‘beautiful, intricately-carved’ ivory sculptures and figurines over the years. It highlights that while ‘each piece is unique and lovely in its own right, ivory is obtained through the illegal hunting of wild elephants’. The company points out that selling ivory in the United States is therefore illegal, in most cases. 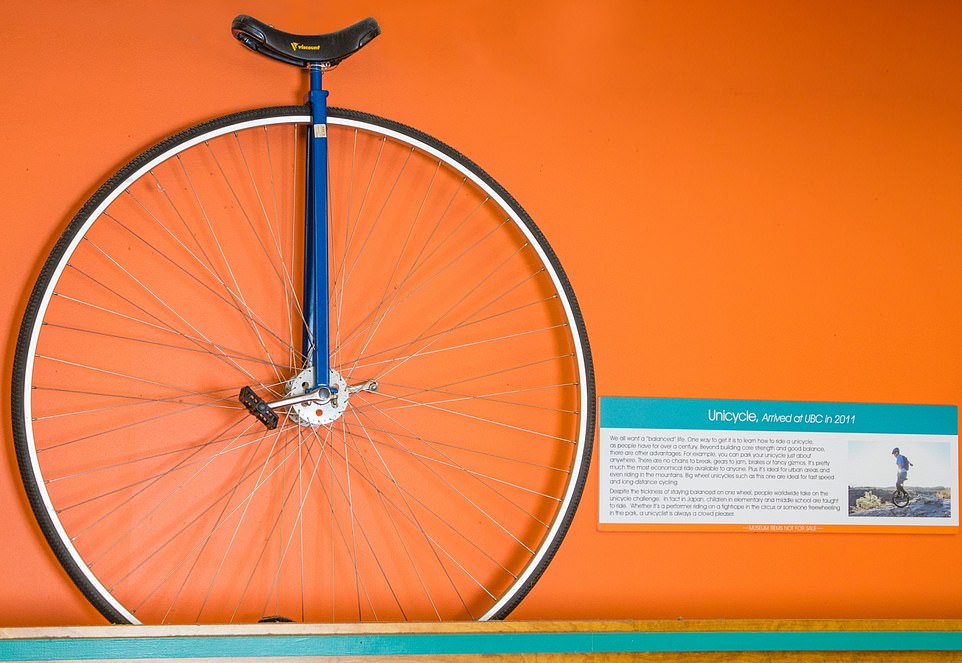 In 2011, a unicycle wheeled its way to Unclaimed Baggage.

The company jibes that the item was ‘a great reminder that we all need a little more balance in our lives’!

A leather-bound, 1934 compendium of the French newspaper titled Noir et Blanc (‘black and white’) arrived at Unclaimed Baggage in 1998.

It had 336 pages and contained news from April through December of that year. 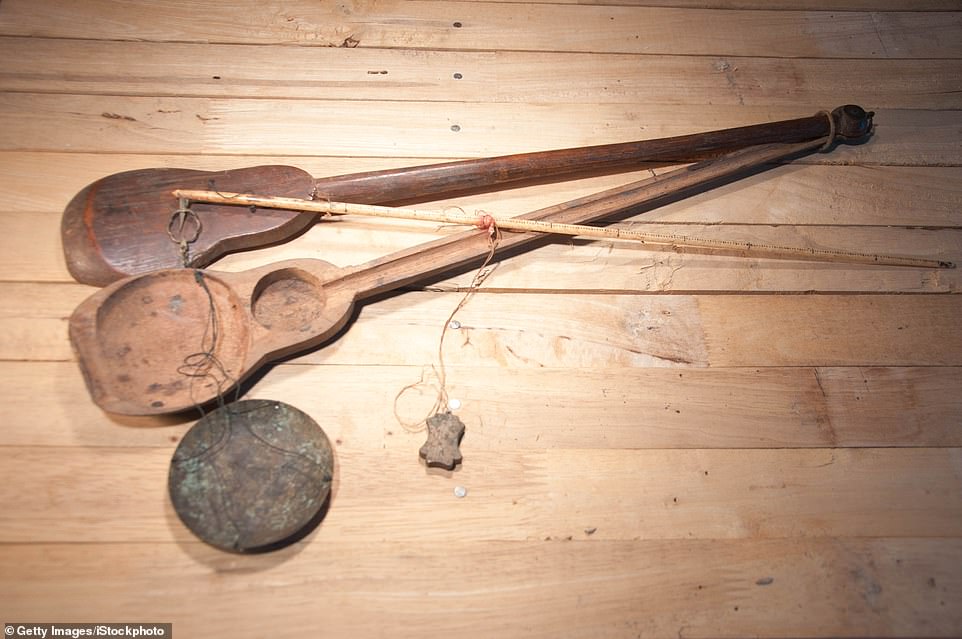 A set of antique Chinese weighing scales once cropped up at Unclaimed Baggage. The luggage specialist reveals: ‘[These] were used for centuries to measure medicines, herbs, precious gems, and more… but in the 19th century, these scales were also used to measure opium – thus earning the nickname opium scales. Opium scales were designed to fit into compact, wooden cases carved into the shape of a violin or a fish.’ 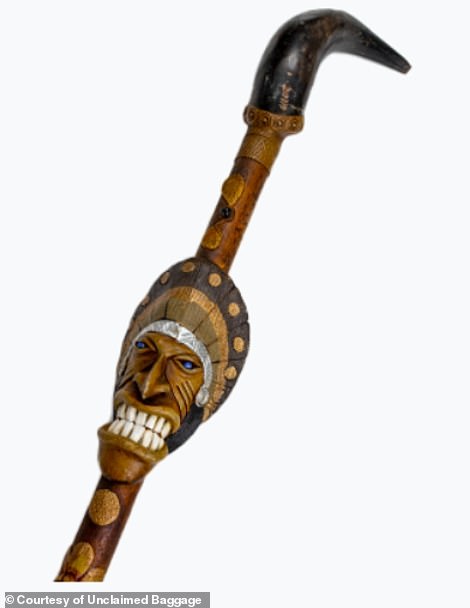 Another odd item that reared its head at Unclaimed Baggage was an intricately-carved walking stick featuring the fierce face of a warrior. The firm said the carvings were ‘detailed and high-quality’ and upon closer inspection, it was apparent that the warrior’s bared teeth were real.

Over the years Unclaimed Baggage has received an array of handmade Amish quilts. It transpired that some of them originated from Lancaster, Pennsylvania’s Amish Country, which is known for producing beautiful quilts.

One of Unclaimed Baggage’s more sss-urprising finds was a live rattlesnake. The company notes – ‘we did not send him to the sales floor!’

VIOLIN MADE BY A STUDENT OF STRADIVARIUS

A violin made by a student of Antonio Stradivari, a world-renowned 17th-century maker of stringed instruments, was once found at Unclaimed Baggage. As well as violins, Italian Stradivari built guitars, cellos, harps and violas. Unclaimed Baggage highlights that Stradivarius violins are ‘among the most prized instruments in the world – making a violin built by one of his students the next best thing’. 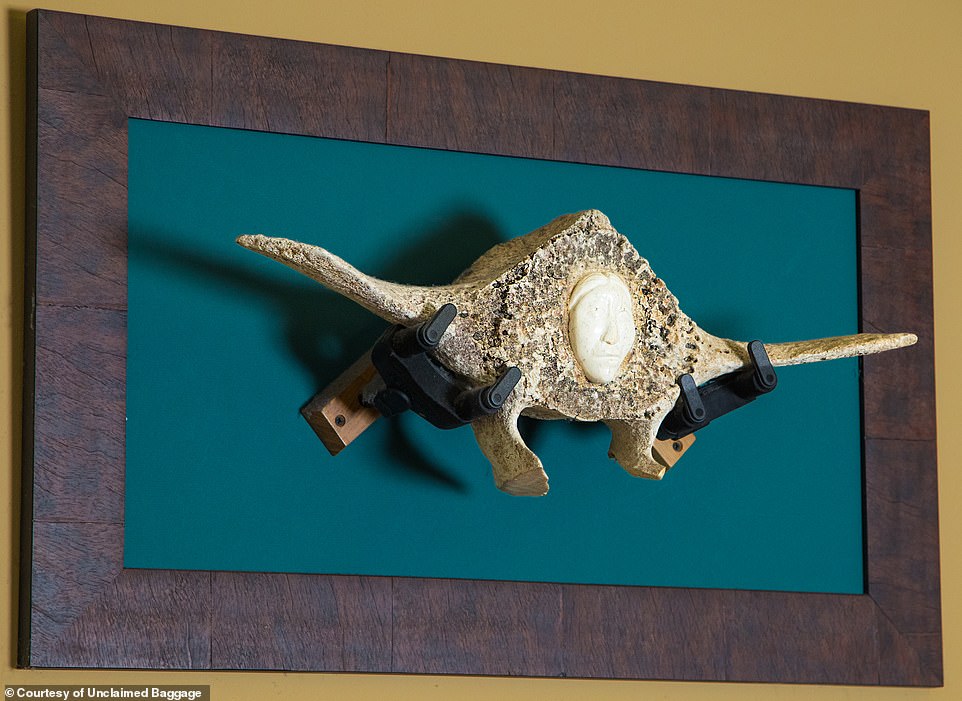 Unclaimed Baggage buys ‘truly orphaned’ items from domestic U.S airlines and other travel firms – items that are unclaimed after a three-month search for the owners. It then either resells them, gives them to charities or recycles them. Clothes are washed and dryed, electronic items tested and cleared of data and jewellery and luxury items appraised and authenticated. And the weirdest stuff? That ends up in the store museum.

A humpback whale vertebra ornately carved to feature an Inuit’s face on one side was a memorable find at Unclaimed Baggage. It’s not known where it came from but the company suspects it originated from the Canadian Arctic or Alaska.

It says: ‘Though hunting for humpbacks is widely restricted due to the whale’s endangered species status, indigenous peoples of Canada and northern Alaska continue to hunt them legally. Eskimo hunters use whale blubber for oil, meat for food, and the bones for functional and artistic uses.’

Unclaimed Baggage says it has received an array of unusual xylophones from around the world over the years.

They can fetch more than $1,000, but Unclaimed Baggage says that airline passengers often leave designer handbags on the plane.

The company reveals: ‘Over the years, we have found and authenticated a number of Yves Saint Laurent handbags here and we often unpack items made by the world’s most valuable luxury brands, including Gucci, Louis Vuitton, and more.’

ZEBRA SKIN, WITH EARS AND TAIL 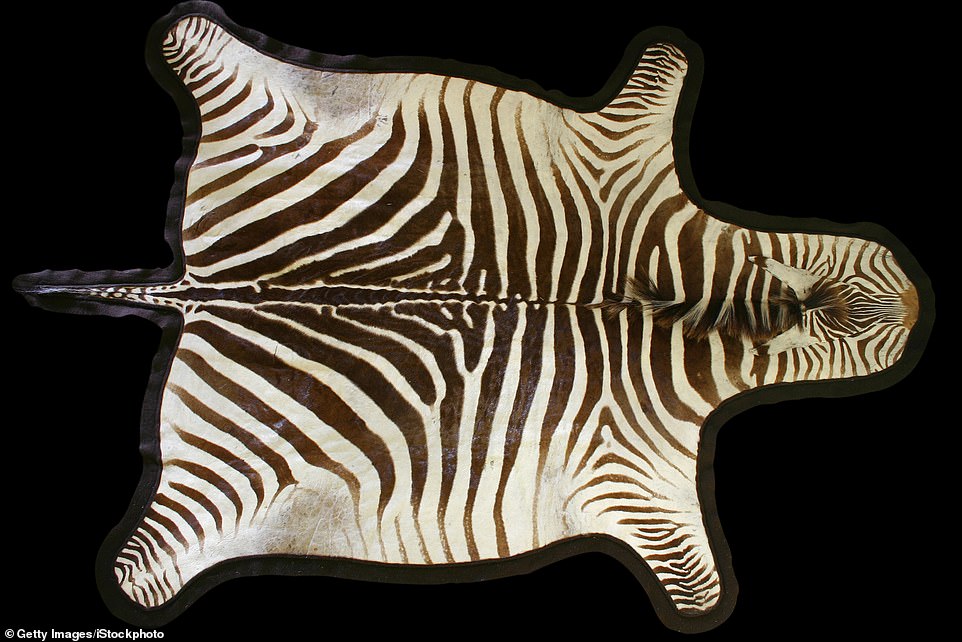 One of Unclaimed Baggage’s wildest finds – a zebra skin complete with ears and tail. It’s not known where the pelt came from, but the company notes: ‘Surprisingly, zebras are legal to hunt in both the United States and Africa. 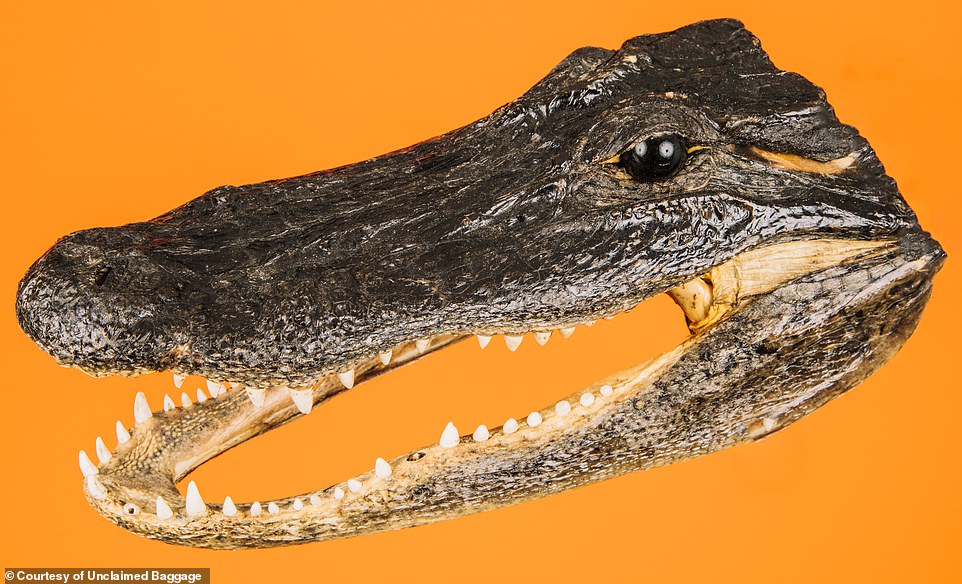 Even in the land of oddities that is Unclaimed Baggage, this alligator head registers as a surprising find (actual item pictured)

A whole alligator head is a surprising find even in this hall of oddities.

Whoever uncovered it must have had quite a shock.

But at least the animal was dead, unlike the aforementioned rattlesnake… 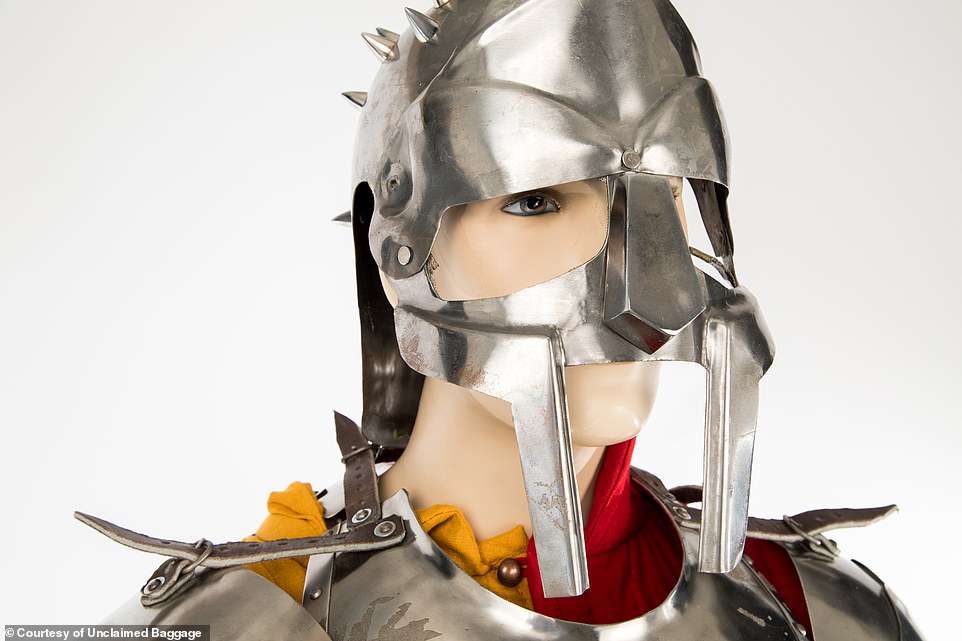 Turns out that there are some careless knights out there…

This suit of armour, which is currently in storage, is one of three that Unclaimed Baggage has been sent over the years. 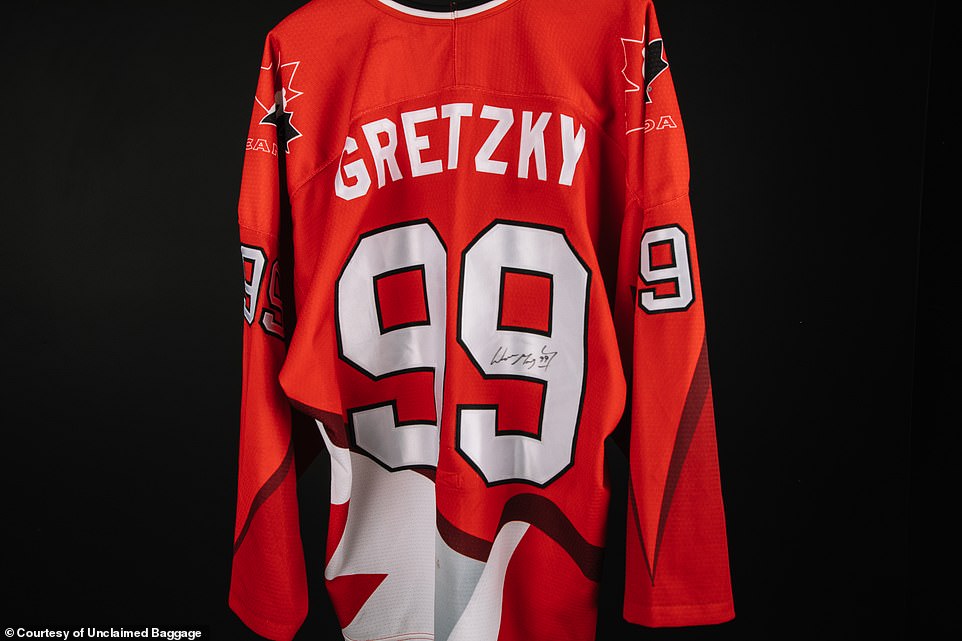 Even prized collector’s items get orphaned, it turns out.

A signed Gretzky hockey shirt found its way to Unclaimed Baggage and is currently in storage.

Canadian Wayne Gretzky is said by many to be the greatest ice hockey player in the history of the game. 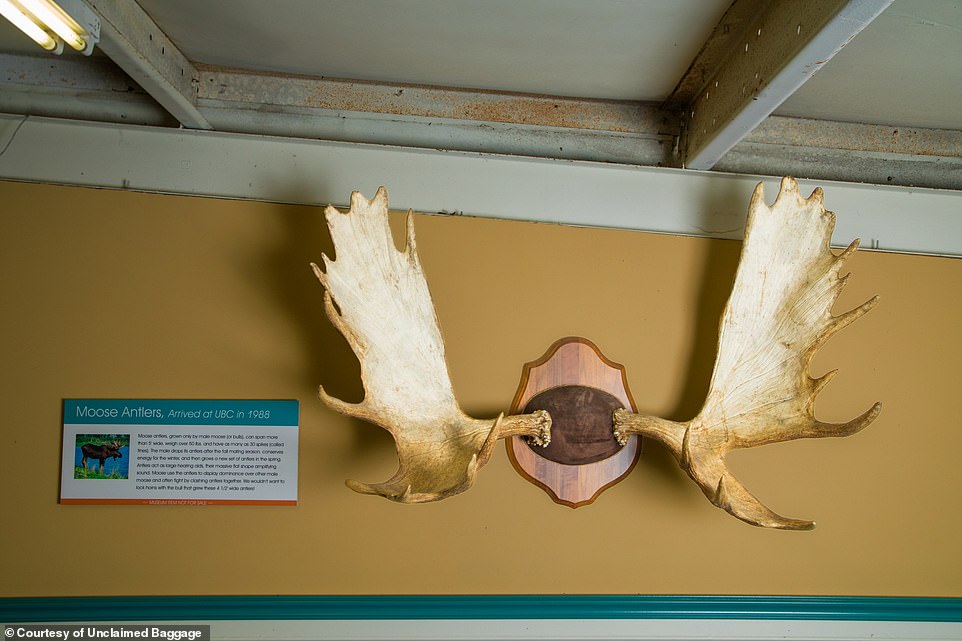 These four-and-a-half-feet-wide moose antlers are on display at Unclaimed baggage, having arrived in 1988

In 1988 a pair of Moose Antlers arrived at Unclaimed Baggage.

The antlers, which are four-and-a-half-feet wide, are one of the many unique items on display at the center.

The Unclaimed Baggage Center was unable to supply details of where the items were found or which carrier they were discovered on. 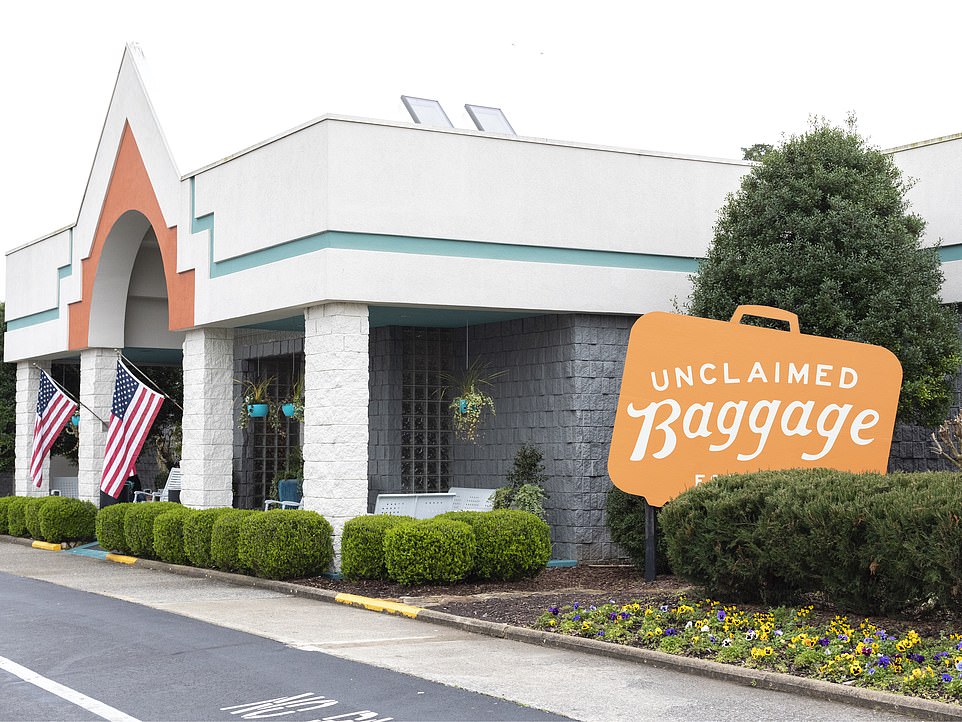 Over 99.5 per cent of lost bags are reunited with their owners. Those that are eventually deemed truly orphaned, following a three-month search, may end up at Unclaimed Baggage and given a new lease of life