See its splendor on a virtual tour

The Walla Walla Valley wine region in the state of Washington was recently named America’s Best Wine Region in the 10Best Readers’ Choice Awards. This region, together with other wine growing areas in the state and in nearby Oregon, is known for its exceptional vintages.

But there’s so much more to enjoy beyond the wine! This virtual tour will take you along the historic Columbia River Gorge from Oregon to Washington and give you a glimpse of the dramatic geology and sublime natural beauty of this pristine region of our country. 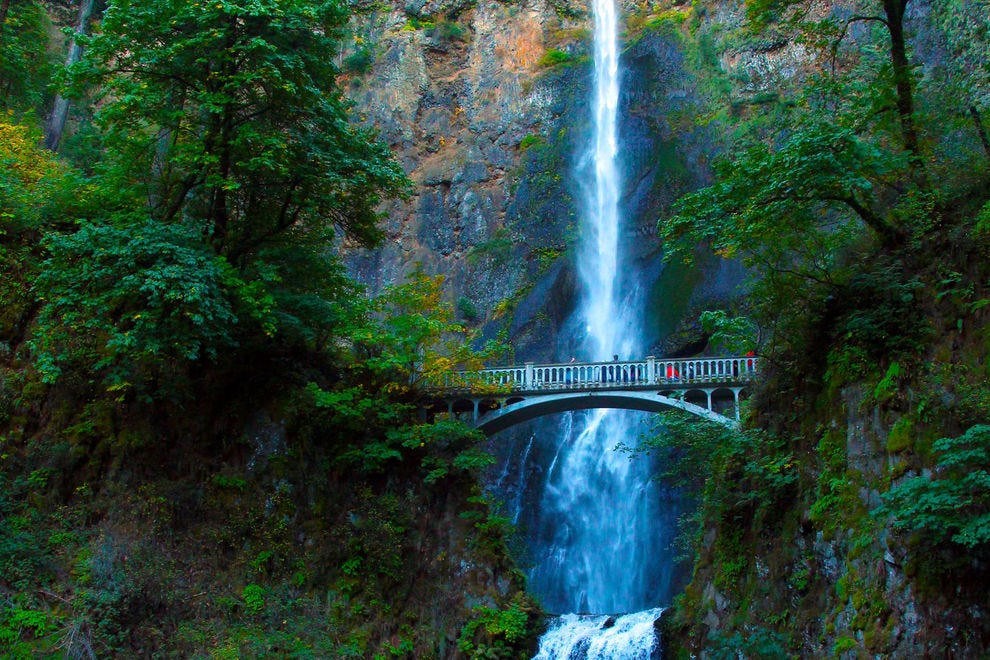 The adventure of discovery begins

Portland, Oregon is often the launching point for a tour down the Columbia River, accessible via the Willamette River that flows through the city. That is not, however, where the mighty Columbia has its source. It begins in the Rocky Mountains of British Columbia, Canada and flows through the state of Washington and Oregon before emptying into the Pacific Ocean.

One of the first natural wonders you’ll encounter is the famous, two-tiered Multnomah Falls, the most popular natural recreation site in the Pacific Northwest. Various observation decks, bridges and walking trails allow the visitor dramatic views of these majestic falls, which are readily accessible from Interstate 94. 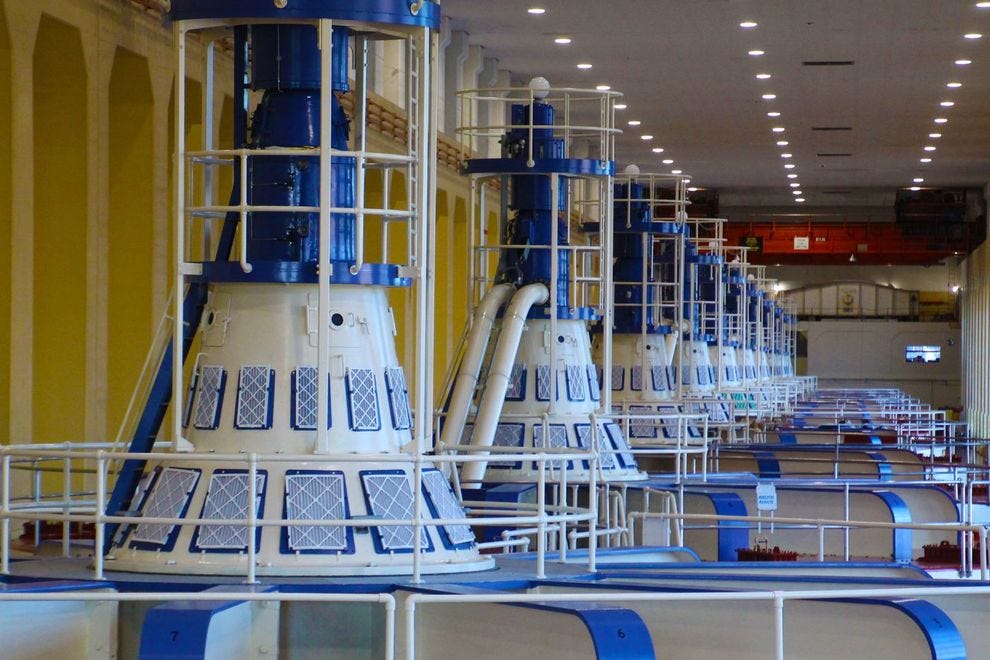 The Bonneville Lock and Dam, a National Historic Landmark, was constructed in the 1930s and was the first federal lock and dam on the Columbia and Snake rivers. Visitors can tour the Colonial Revival-style administration building, admire the beautiful blue-and-white turbines inside Powerhouse 1, and watch migrating fish move up the fish ladders (passageways for adult fish that seasonally migrate upstream). 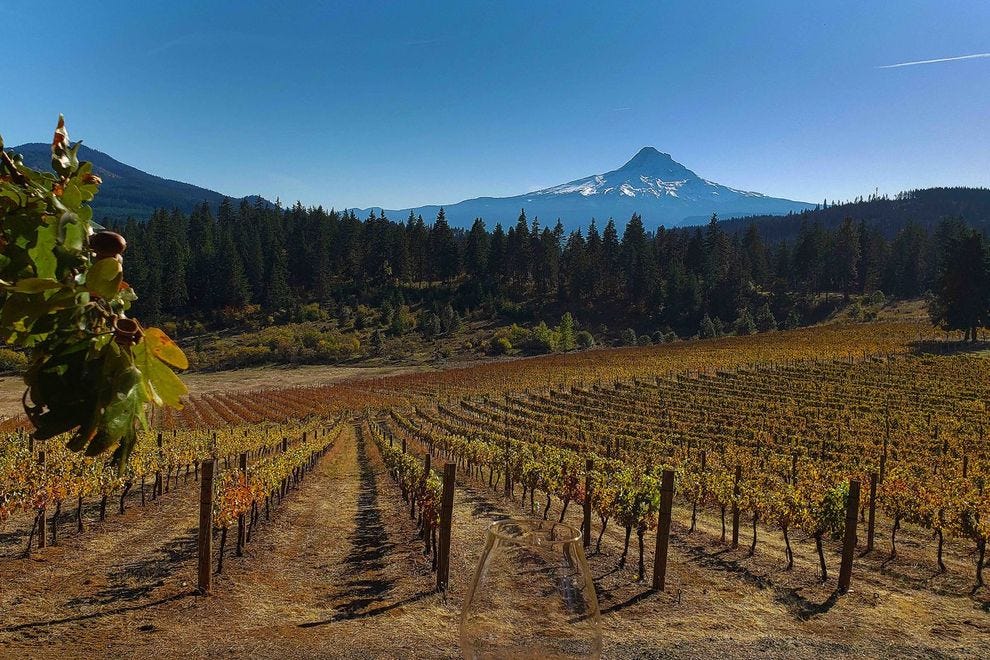 Talk about a wine-tasting experience with a view! At Wy’East Vineyards, majestic Mt. Hood looms in front of you as you sip from the winery’s best vintages, which include pinot gris, syrah, zinfandel, cabernet sauvignon, pinot noir, and chardonnay, among other varietals.

The rich volcanic soil from the adjacent mountain is key to the outstanding wine production in this area. 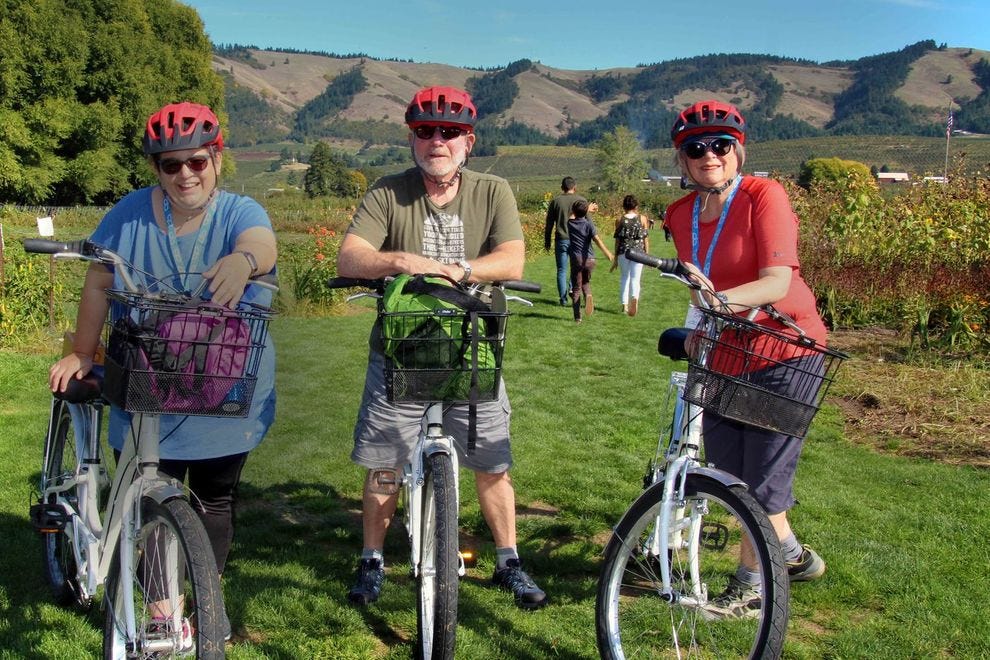 Biking is a favorite pastime along the roads of the picturesque Columbia River Gorge. Here in the Hood River Valley, bikers of all ages enjoy pedaling along the roads and trails, visiting quaint shops, bountiful orchards and boutique wineries along the way. Bike outfitters abound in the area, so finding your perfect set of wheels is no problem. 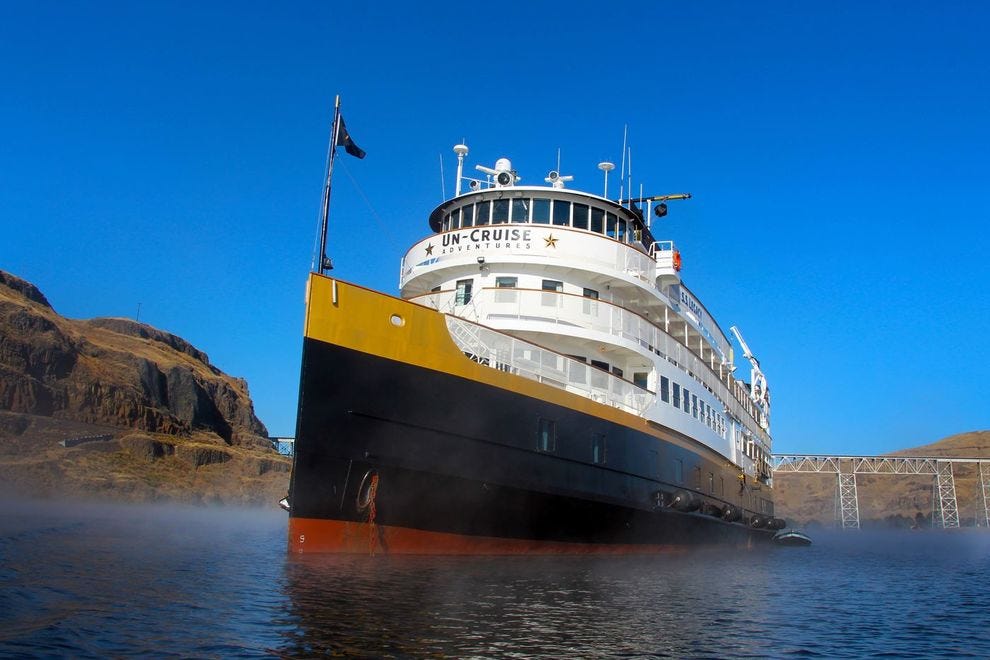 When we’re all able to cruise again, one of the most comfortable and luxurious ways to experience the wild beauty of the Columbia River is on a small adventure ship. Unpack once and never have to worry about where to sleep and dine while you explore this remote region.

These ships also take you to areas that would be difficult, or impossible, to access on your own.  One of the several small ships that cruise these waterways is offered by UnCruise Adventures – a 2019 10Best Readers’ Choice Award winner for Best Adventure Cruise Line. 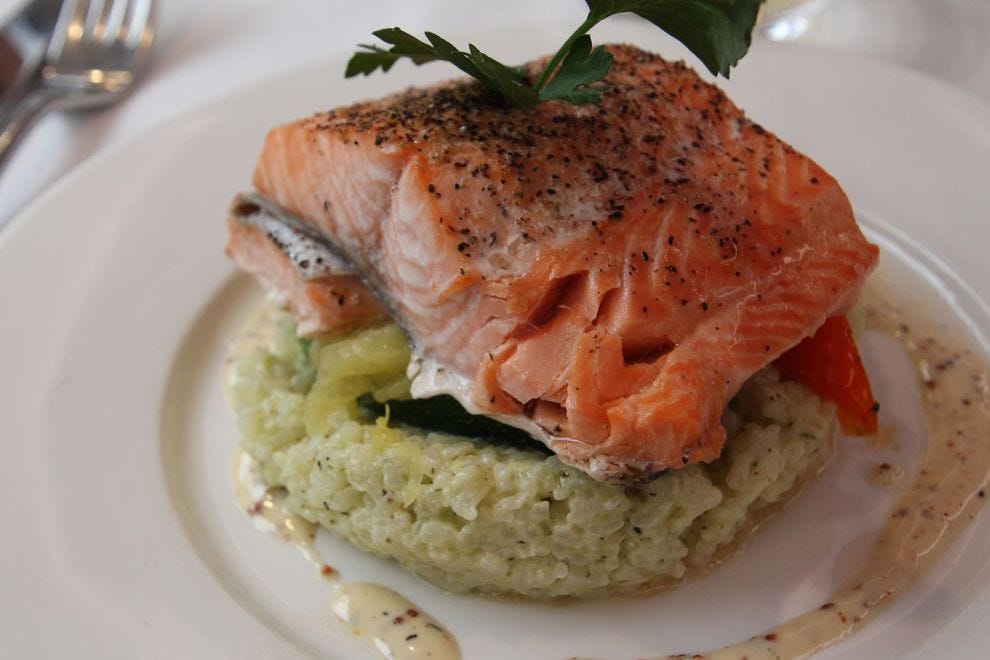 Catch of the day

Needless to say, fish is king in this part of the country. While you can find any type of cuisine in local restaurants, if you’re a seafood lover, you’ve come to culinary heaven.  The fresh salmon in season is a tasting experience unlike any other. 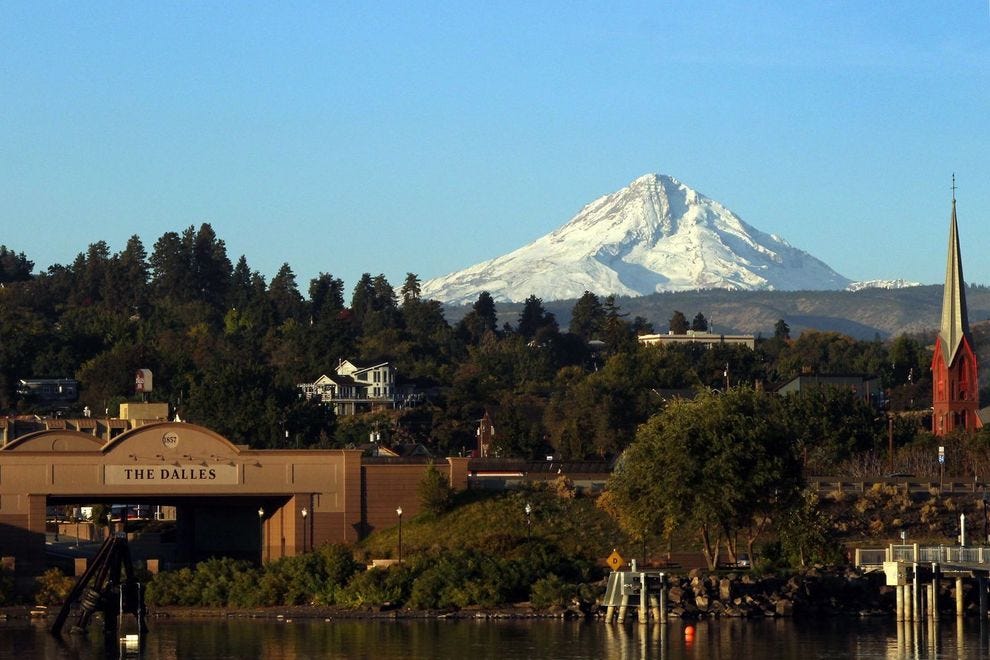 Founded in 1857, The Dalles, Oregon, is one of the state’s most historical cities and was known as the town at the end of the Oregon Trail. Not only is it an interesting place to see for its historic significance, but it’s also the gateway to many spectacular natural sites in the area, such as majestic Mt. Hood looming in the distance. 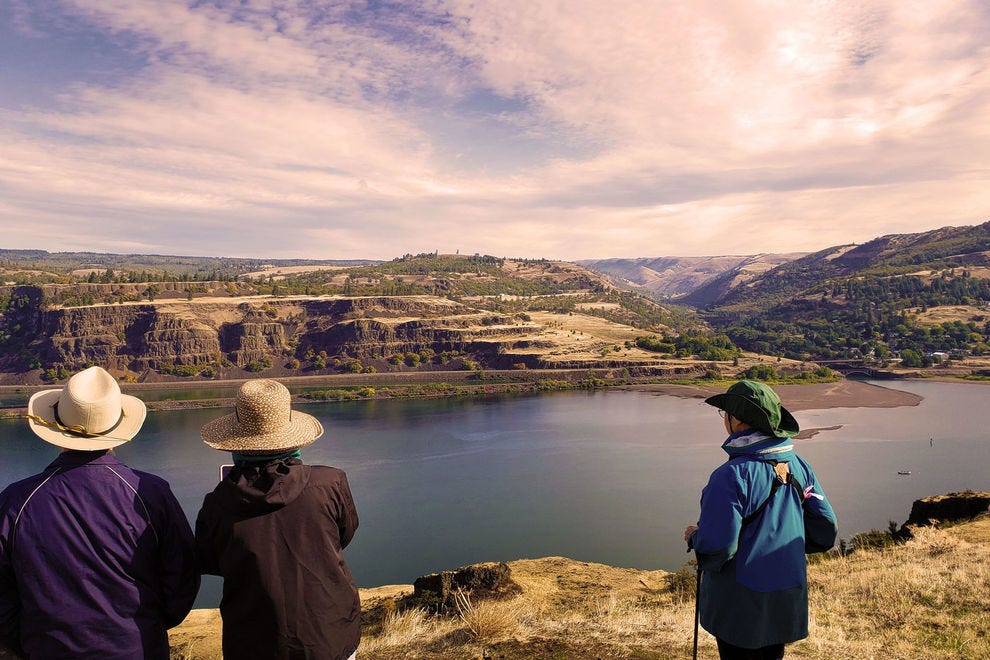 The Rowena Plateau is an 8-mile drive from The Dalles, and a not-to-be-missed natural wonder. This plateau was shaped by lava flows, floods and volcanic ash in prehistoric times. Opt for a 2-mile round-trip hike to the crest of Tom McCall Nature Preserve, where you’ll be rewarded by views in every direction – including the Columbia River far below. 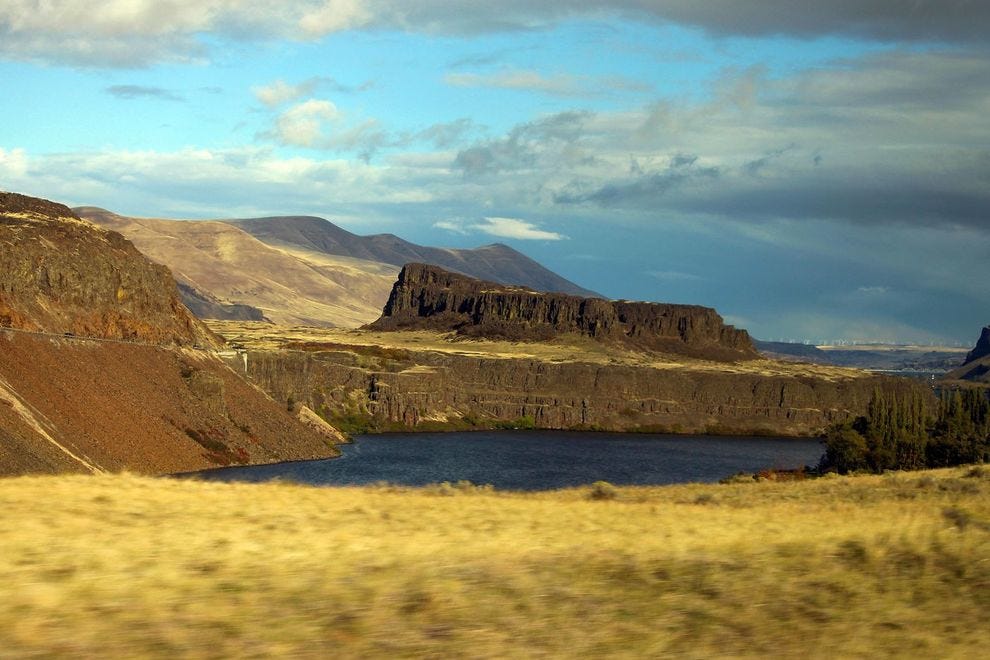 As you wend your way through this wild and picturesque region, you’ll be amazed at the geological formations that make this part of the nation so incredibly unique. Keep your camera ready, as you never know when the next beautiful scene will capture your eye. 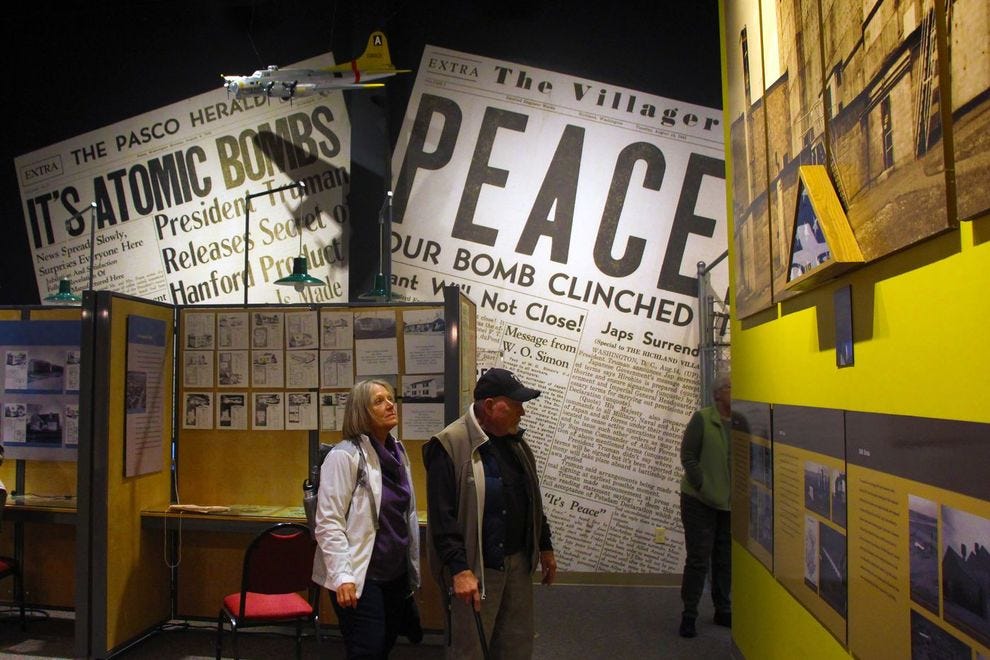 Located along the Columbia River, a visit to the Reach Museum in Richland, Washington features galleries detailing the geological, cultural, and natural history of the Columbia Basin.

In addition, a major gallery tells the story of the region’s involvement in the Manhattan Project during WWII, when a large workforce was mobilized to develop fissionable material that lead to the first nuclear weapon, the atomic bomb. 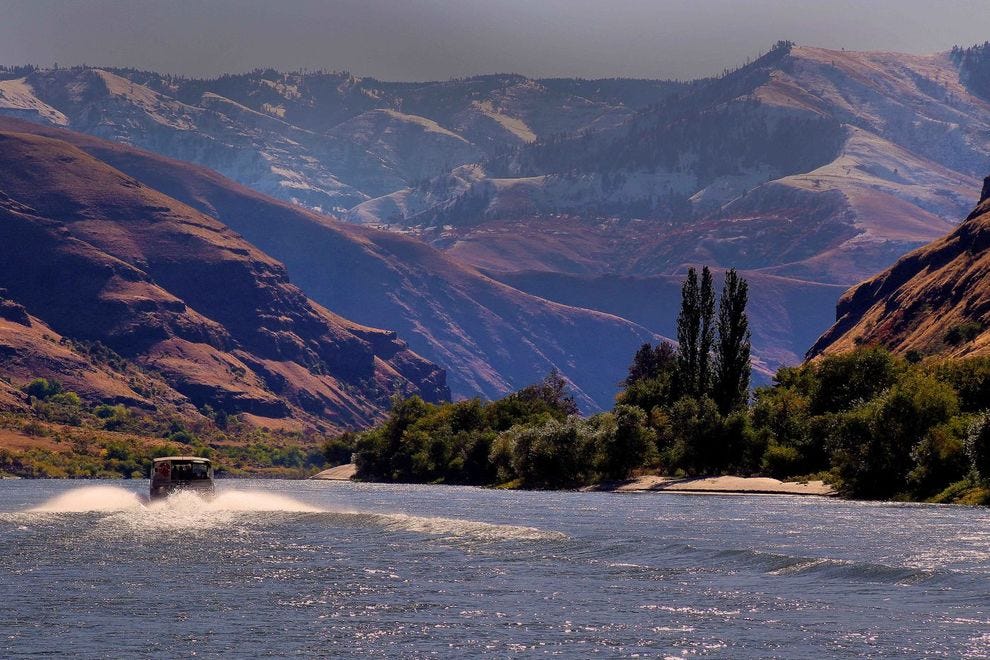 For the ride of a lifetime, consider a jet boat ride along Oregon’s Hells Canyon. Carved by the waters of the Snake River, the history of this area is as rich as the canyon walls are dense. Along the way, keep your eyes peeled for bighorn sheep and golden eagles.

Hemmed in by vertical cliffs, this free-flowing stretch of the Snake River cuts its way through North America’s deepest river gorge. 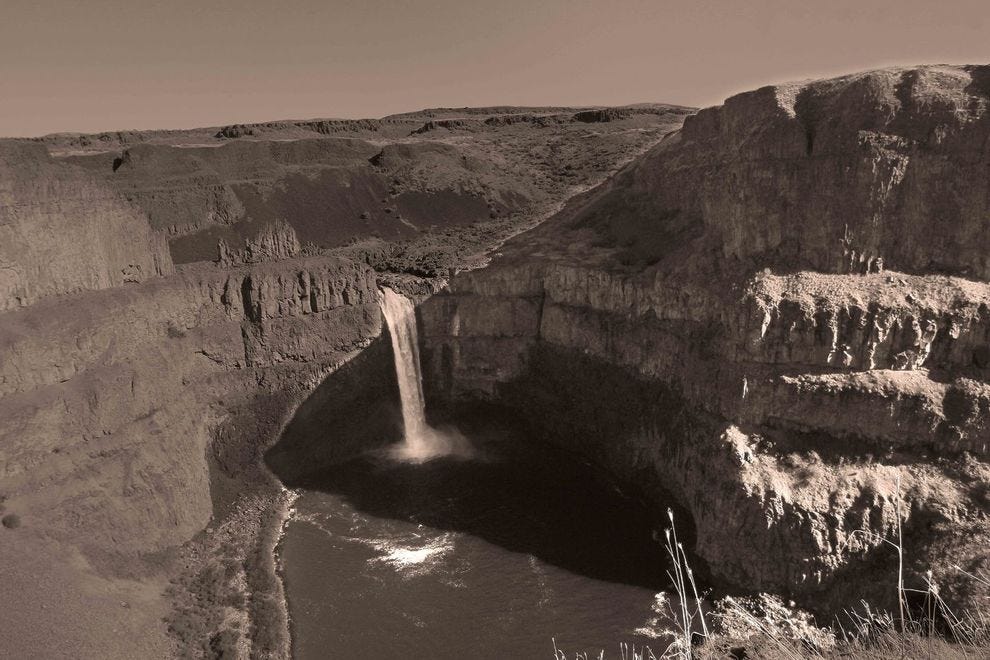 A waterfall from the Ice Age

Another must-see during your journey along this historic route is a visit to the Palouse Falls State Park along the Snake River, the largest tributary of the Columbia River. You’ll marvel at the waterfall, the only one remaining formed by the Ice Age-era Missoula Floods.

Hike above the canyon to view the falls, or take a hiking path down to the falls’ source for an up-close view of this natural wonder. 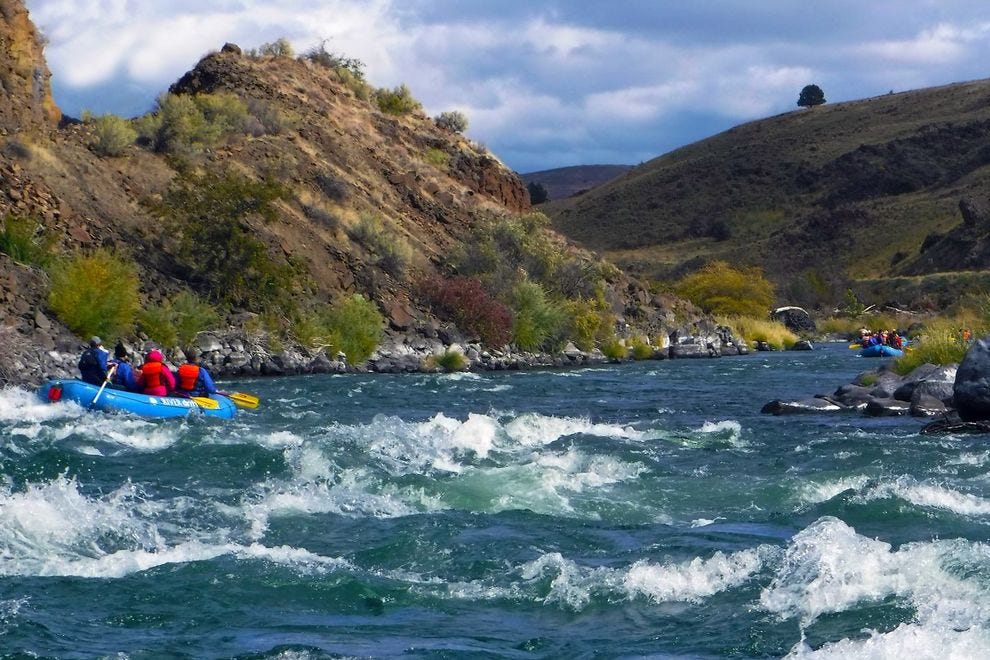 For an adventure you’ll never forget, consider a whitewater rafting trip on the Deschutes River, which features Class II and III rapids which come with names like  “Elevator” and “Surf City.” Local outfitters provide the gear and expertise. 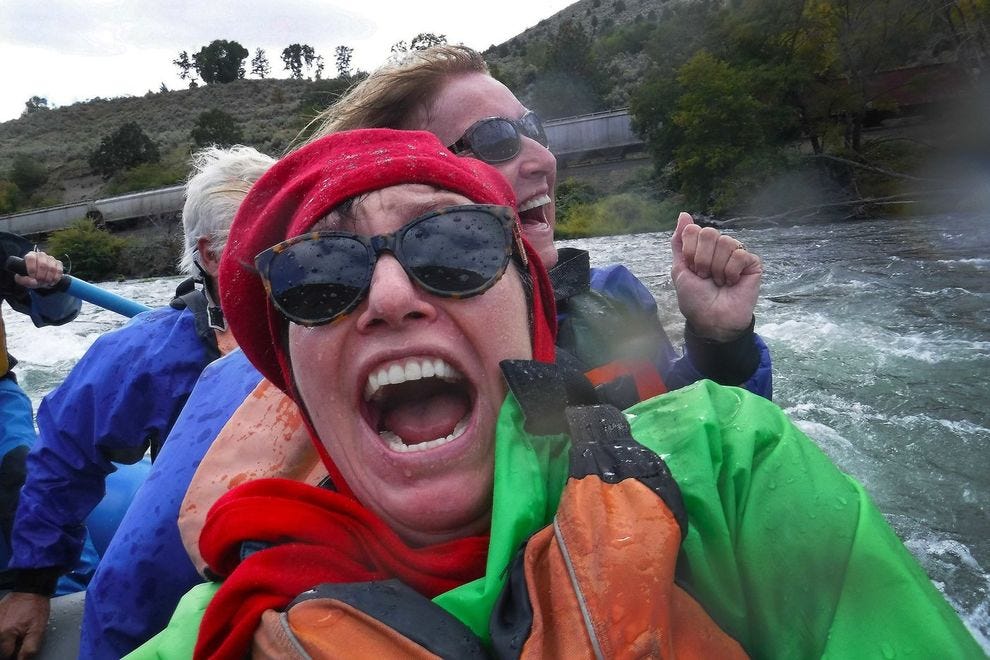 Since a picture is worth 1,000 words, this photo gives an idea of the adrenaline rush experienced during an exciting whitewater rafting trip along Oregon’s Deschutes River. 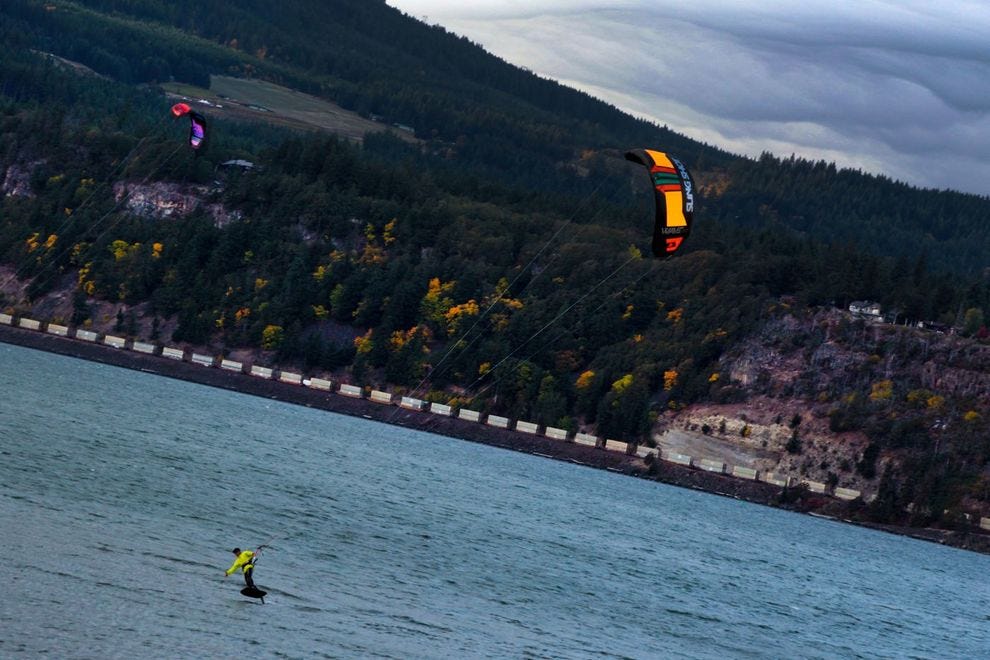 One of the most popular towns for water sports is Hood River, Oregon, thanks to its position at the confluence of the Hood and Columbia rivers in the heart of the Columbia River Gorge. The city’s family- and windsport-friendly Waterfront Park is the perfect place to picnic and watch the wind and kite surfers in action. 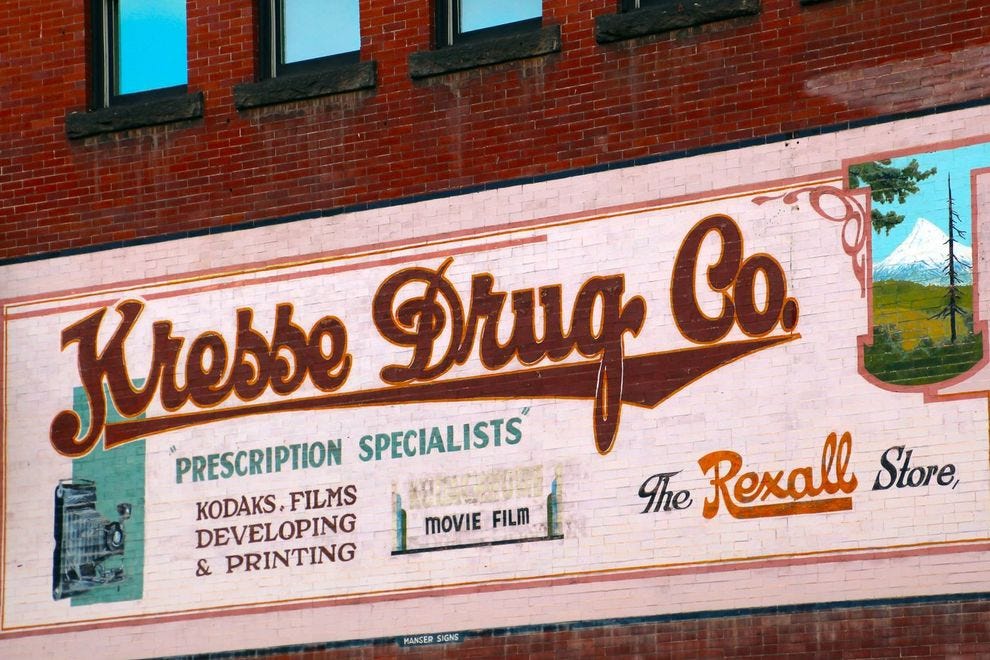 Go back in time

Nestled along the Columbia River with a backdrop of the Cascade Mountains, the town of Hood River has much to offer the visitor. You can enjoy a thriving arts community, excellent hiking trails, vintage shops, quaint and historic hotels and an expansive river park.

Walk through the town’s charming streets and admire the vintage ads that are preserved on many of the brick walls. The town is home to the heritage Mount Hood Railroad which offers scenic train rides along the Hood River. 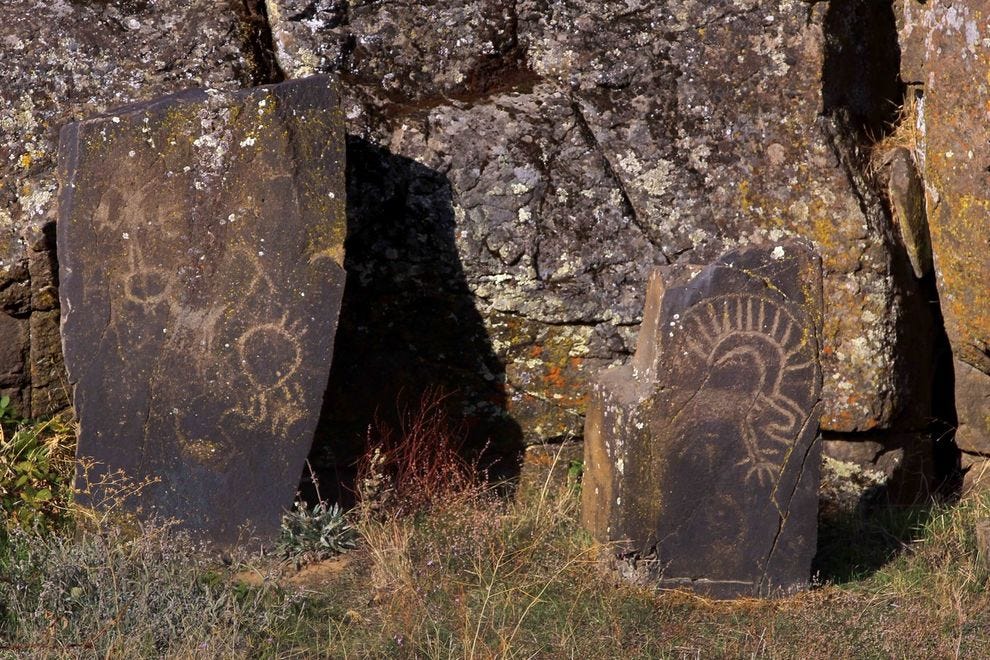 Native American rock petroglyphs that date back 7,000 years can be found in many locations across the Columbia River Gorge region, from the area near the Dalles Dam to the shores of the Snake River. Needless to say, it’s a sobering moment to stand in front of a rock carved by the region’s first inhabitants millennia ago. 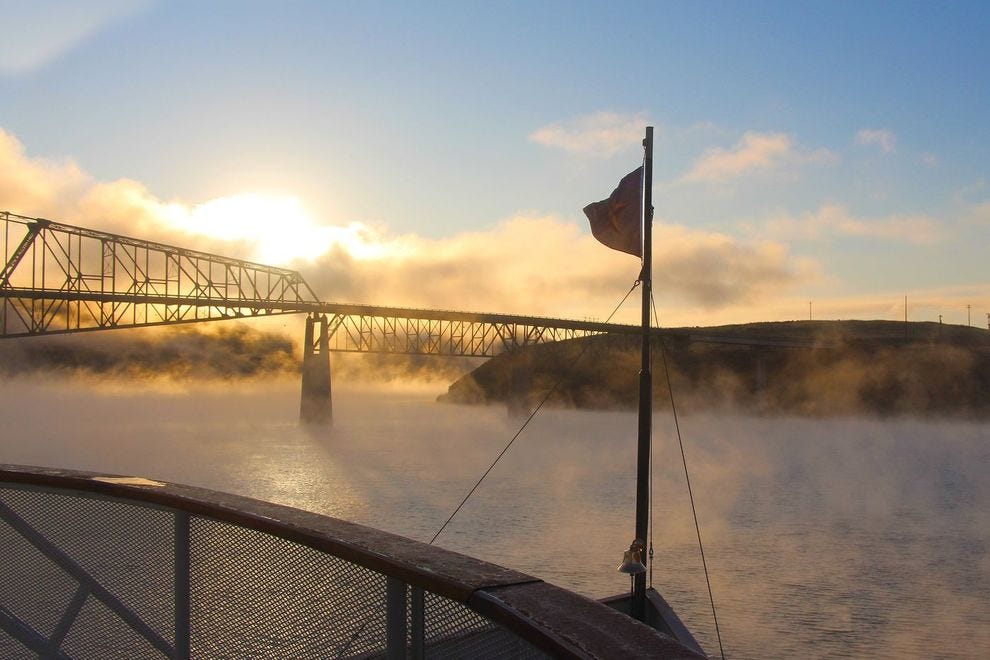 Sunsets are especially stunning along the Columbia River, where ephemeral mists roll in to create dreamy landscapes.