What are the best museums in the U.S.? Vote now

In some states throughout the Northeast, Midwest and Pacific Coast, Prohibition was just a 13-year dry spell. Once the 21st Amendment passed, many brewers across the United States were back in business. But in some states along the Gulf Coast, antiquated Prohibition-era laws are still lingering on the books, making brewing craft beer a challenge.

“Breweries were allowed [in Alabama], but they weren’t allowed to make beers over 6% ABV,” says Ryan Schamberger, owner of Big Beach Brewing located in Gulf Shores, Alabama which opened in October 2016. It wasn’t until 2009, when a grassroots organization called “Free the Hops” was able to overturn the law, that the maximum alcoholic volume of beer increased to 13.9%.

Other state laws aren’t so clear, leaving interpretation and reinforcement of these laws up to elected officials. “There are so many gray areas that haven’t been changed in a long time,” says Krickett Schmidt-Racca, Marketing & Special Events Manager of Crying Eagle Brewery in Lake Charles, Louisiana. “Every time we get a new Commissioner, we have to see where they stand.”

Crying Eagle Brewery opened in July 2016 and joined the Louisiana Brewers Guild which lobbies against archaic brewing laws. “At one point, we weren’t allowed to promote ourselves outside of just packaged beer that could be bought at a grocery store,” says Schmidt-Racca. That law has been overturned in recent years, allowing Louisiana breweries to advertise. 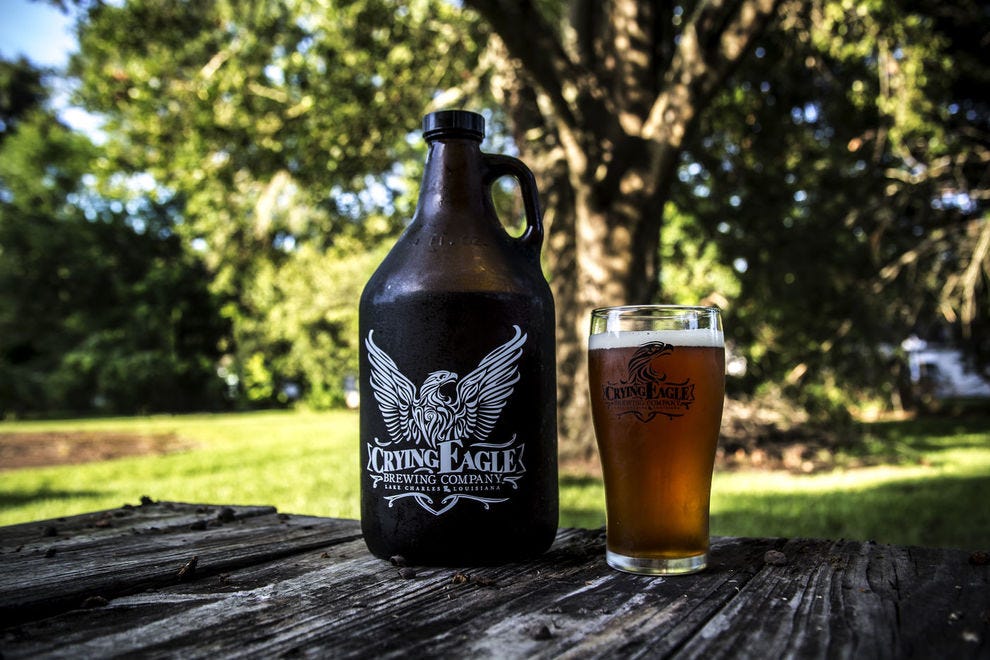 In Mississippi, the laws were so unclear that people from hopeful brewers to lawmakers assumed breweries of any kind were illegal. That is until 2003 when Mark Henderson, owner of what is now Lazy Magnolia brewery in Kiln, Mississippi, read through all of the Mississippi’s codes – twice.

“I couldn’t find anything,” Henderson explains. “Everyone kept telling me ‘Yeah, you can’t do that. That’s illegal in Mississippi.’ And I would ask them to show me where it says that in the code. And they’d tell me that I had to talk to somebody else.”

Despite getting a late start in the craft beer game, breweries along the Gulf Coast are on the rise, innovating unique styles of beer that reflect each region’s history, culture and local flavors.

“These breweries are a window into the local community,” says Leroy Bridges, Vice President of Digital & Communications with Visit St. Petersburg/Clearwater. The high concentration of local breweries in this stretch of 24 cities and towns has earned it the nickname “Gulp Coast.” 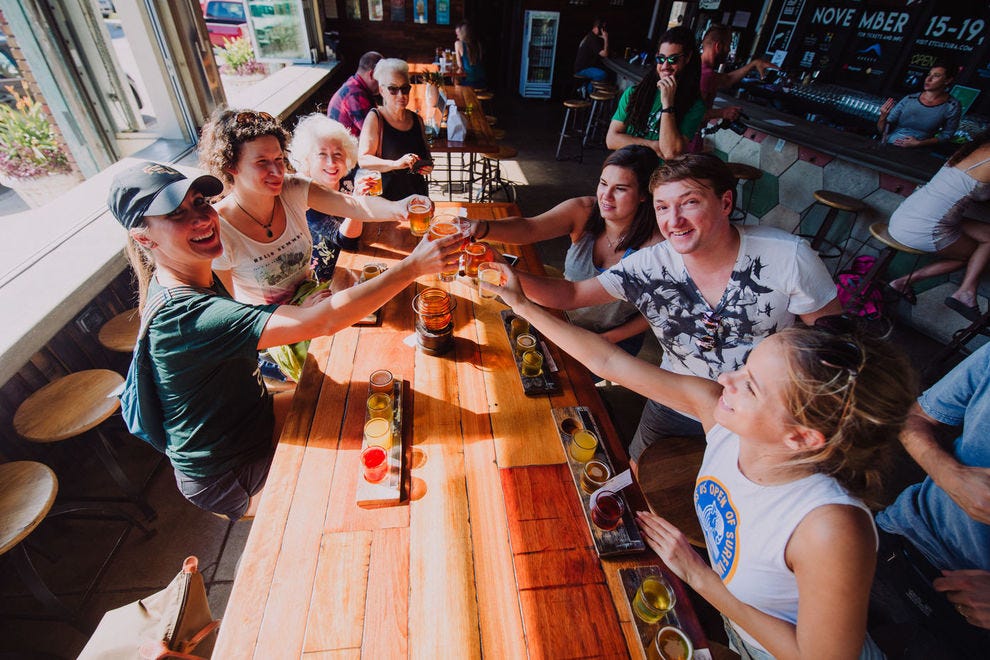 “There is a style that was born out of this area called Florida Weisse,” says Bridges. “it brings in everything you would think of as Florida citrus. Oranges are plentiful, apricots, strawberries, limes, lemons.” Bridges explains that this doesn’t mean that all beers are fruity, “it’s just that as you visit breweries throughout St. Petersburg/Clearwater, you’ll see breweries utilizing the fruits in many different ways.”

Southern Pecan is the flagship beer at Mississippi’s Lazy Magnolia Brewing. “Pecan pralines are a cultural icon of the South,” says Henderson. Aside from local tastes, he says another factor that makes these beers distinct to the Mississippi’s Gulf Coast is the climate.

“If you were to drink a heavy stout in the South, in the 90-degree heat, you’d pass out,” says Henderson. Using their understanding of chemistry, the Hendersons (Mark’s wife Leslie Henderson is a chemical engineer with a Masters in Bioprocessing) developed a sweet potato stout that is much lighter and easier to drink in the Mississippi heat. 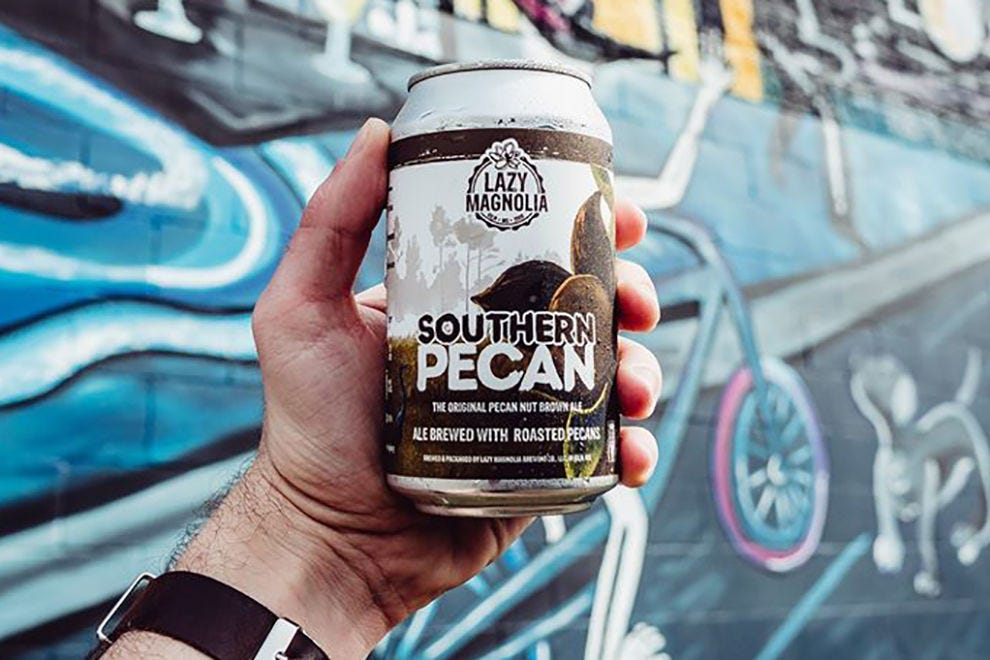 The beers offered at Crying Eagle Brewery had to be tailored to the region’s preferences as well. “We’re not the East Coast, we’re not the West Coast, so people don’t want these big ‘ol hop bombs,” says Schmidt-Racca. To cater to the local community, they experimented with subtle hops that had lighter flavors and were more palatable to their market.

Their top selling beer is the Louisiana Lager. “It’s a traditional lager but we use Louisiana rice,” says Schmidt-Racca. “We wanted to use something local and we have a lot of rice here!”

Because craft brewing is still relatively new to Alabama, beer drinkers in the state gravitate towards the flavors that they’re used to – the lighter lagers that resemble Budweiser and Coors. At Big Beach Brewing, Rod’s Reel Cream Ale is a local favorite.

“A cream ale is the lightest ale you can make,” says Schamberger, “but it has more flavor, it has a little touch of sweet corn to it, which is where we get the ‘cream’ name from.”

However, to accommodate the growing taste for hops in the state that fought to free them, Big Beach Brewing serves Area 251 Hazy IPA. “We hit both extremes of the spectrum – the lightest ale you can make and the hoppiest ale you can make.”