Britain is famous for its comfort food, from heart-warming pies to fish, chips and mushy peas.

Here the Mail on Sunday’s Richard Mellor takes you on regional food tour around the UK and picks the best places to enjoy the nation’s most renowned dishes.

Get ready to start salivating…

SAVOUR SOME SNACKS OR TUCK INTO THE HEARTIEST OF ROASTS

Meating place: The sign outside Ann’s Pasties in Lizard

If Cornwall were its own country – which many inhabitants claim it should be – the pasty would be its national dish. The semi- circular pies traditionally contain beef, diced potato, turnip and onion. According to a 1929 Cornish recipe book, they should be wrapped in a paper or muslin bag and then scoffed from end to end – not started in the soft middle.

Eat: Among the county’s best specialist shops is Ann’s Pasties in Lizard, where the surroundings are as tasty as the food (annspasties.co.uk).

Stay: On the same scenic peninsula is Polurrian On The Lizard, a 41-room luxury hotel whose Mediterranean restaurant serves fresh local fish. Bright, cheery B&B doubles from £99 a night (polurrianhotel.com).

Few things smell as good as melted mature cheese on a thick slice of toast, especially if the mix is enlivened by ale, mustard and Worcestershire sauce. But we know little of Welsh rarebit’s provenance. The word ‘rarebit’ is probably a corruption of ‘rabbit’, for instance, yet the dish is thought to have been vegetarian from the start. It does, however, have Welsh roots and probably descends from similar snacks from the valleys of South Wales.

Mix mutton or lamb with onion and sliced potatoes then slow-cook in a deep, heavy pan and you’ll get a very fragrant Lancashire hotpot. This simple stew hails from the pre-industrial days in the North West, when time-pressed thread-spinners could leave their main meal simmering all day.

Eat: Former Coronation Street character Betty was famous at the Rovers Return for her hotpots. In 2012, Jennie McAlpine, the actress who plays Fiz Brown in the soap, launched Annie’s restaurant in Manchester, where the dish is a bestseller (anniesmanchester.co.uk).

Stay: The Abel Heywood, a nice Northern Quarter pub, is a ten-minute walk from Annie’s. B&B doubles from £114 a night (abelheywood.co.uk). 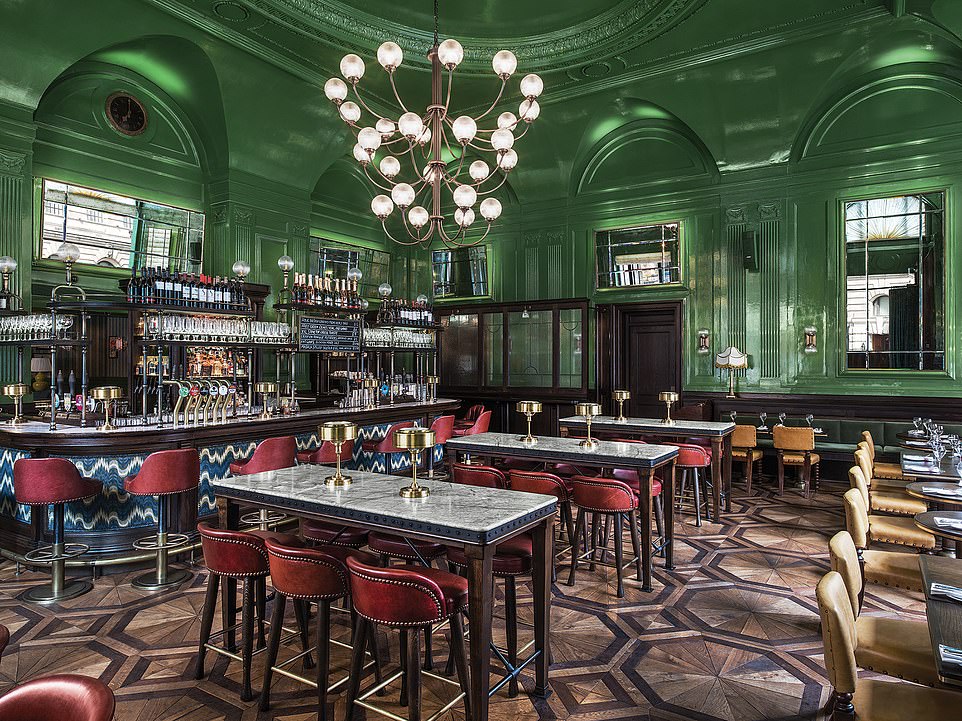 The Wigmore, just off nearby Regent Street, is a pub whose Michel Roux Jr menu includes masala-spiced scotch eggs

You might expect these snacks – a soft or hard-boiled egg wrapped in sausage-meat and breadcrumbs – to have been created in Scotland, but London’s luxury department store Fortnum & Mason swears it devised scotch eggs in 1738. Other theories have it as an offshoot from an Indian dish based on a meatball.

Stay: The Wigmore, just off nearby Regent Street, is a pub whose Michel Roux Jr menu includes masala-spiced scotch eggs. At the swanky Langham hotel next door, B&B doubles cost from £460 a night (langhamhotels.com).

Made with pork from pigs fed plenty of apples, these hearty and peppery sausages need specific ingredients to carry the official Cumberland name. To taste them at their best, head to their spiritual home in the historic county of Cumberland, now the north-west of Cumbria.

Eat: In the Esk Estuary village of Waberthwaite, butchers R. B. Woodall has perfected its Cumberland sausages across eight generations (rbwoodall.com).

Stay: Or tuck into them as part of a terrific breakfast at The Old School, a cosy B&B further north, just past an old steam railway line. Doubles from £65 a night (theoldschoolandbettys.co.uk). 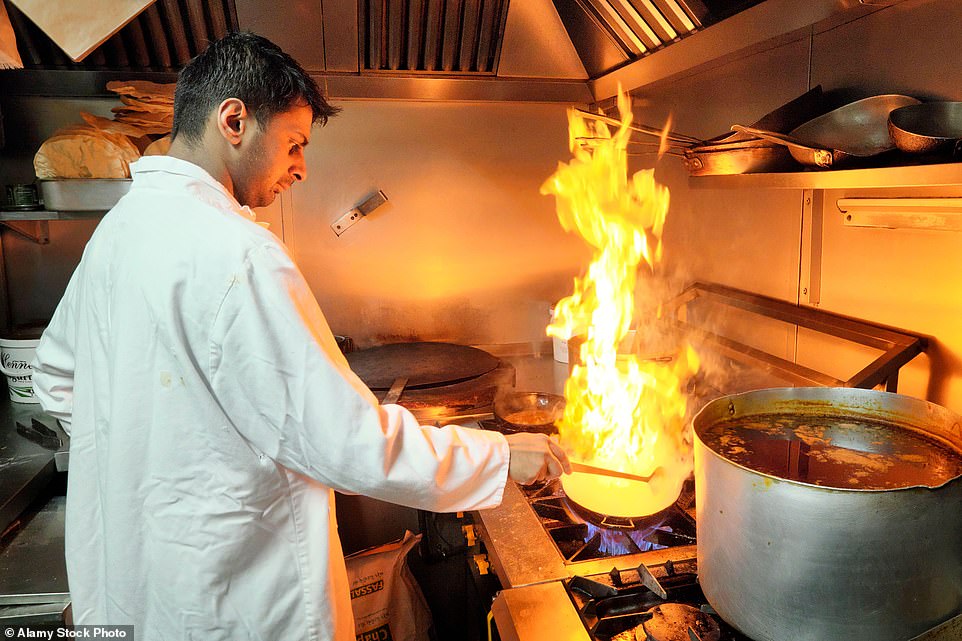 Hot stuff: The balti at Shababs in Birmingham, above, comes recommended by TV chefs the Hairy Bikers

A mild lamb or goat concoction, balti derives from Pakistan’s northern mountains – or it was created in restaurants in Birmingham’s ‘Balti Triangle’ in the 1970s. Either way, it’s a national favourite.

Eat: Dine at Shababs, as recommended by TV chefs the Hairy Bikers (shababs.co.uk). Or tour the ‘Balti Mile’ in Lye, ten miles west.

Stay: In leafy Edgbaston, The Blue Piano is a South-East Asian-themed guesthouse and restaurant. B&B doubles cost from £95 a night (thebluepiaono.co.uk).

Made from minced sheep’s offal, onion, oatmeal, suet, stock and spices, what haggis lacks in glamour it makes up for in flavour. Reckoned (though not proven) to be Scottish, the meal’s allies are ‘neeps’ (turnips) and ‘tatties’ (potatoes). Poet Rabbie Burns penned Address To A Haggis in 1787, and Burns Suppers on January 25 always serve it.

Eat: Whiski on Edinburgh’s Royal Mile serves haggis as a starter or a main course along with the classic veggies, (whiskibar.co.uk). 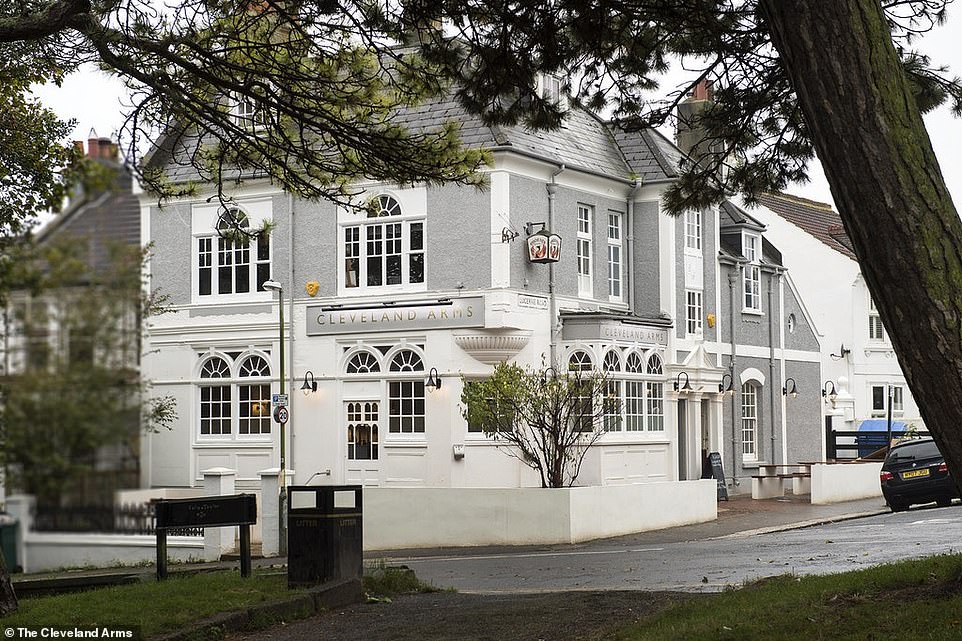 Unofficial British law dictates that roast dinners are strictly for Sunday lunchtime – historically, after a trip to church. The hearty feast is thought to date from the Industrial Revolution, with roast meat – beef, lamb or pork – piled up alongside plenty of roast potatoes and veg, all doused with gravy. Add Yorkshire pudding for beef, mint sauce for lamb and apple sauce for pork.

Stay: Near Brighton Beach is Artist Residence, an art-filled boutique with a cool cocktail bar. Room-only doubles from £149 a night (artistresidence.co.uk). 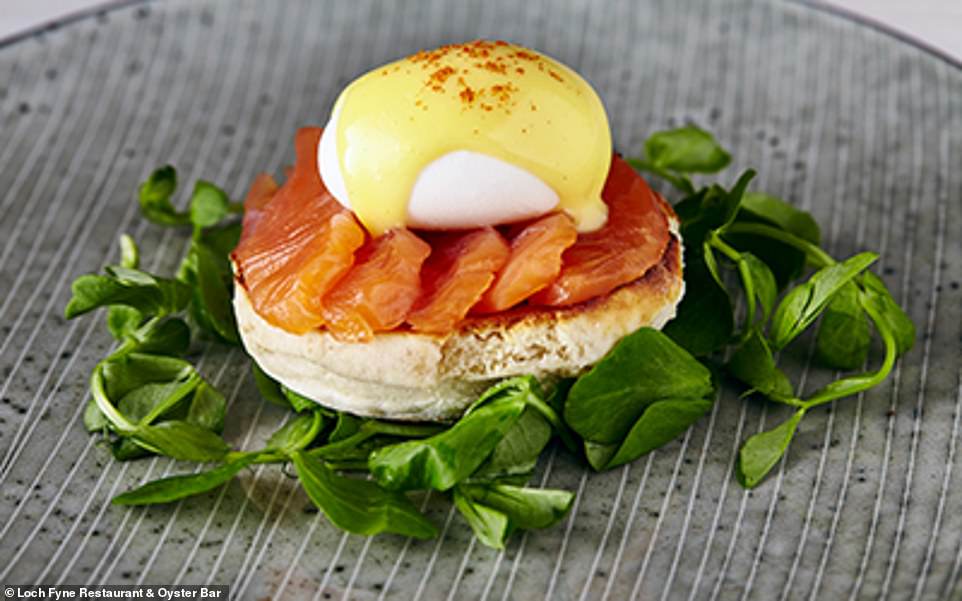 The deep waters of Scotland’s largest sea loch support a mild, delicate salmon that’s at its most delicious when dry-cured and smoked atop shavings of old whisky casks.

Stay: Further along the loch, in Inveraray, the old-school Loch Fyne Hotel & Spa has a pool, bar and bistro. B&B doubles from £152 a night (crerarhotels.com).

The West Sussex town of Selsey is famed for delectable crab meat, alongside Ventnor Bay on the Isle of Wight and Cromer in Norfolk.

Eat: The Lifeboat Inn in Selsey, right by the beach, serves delicious crab sarnies using that day’s catch. Go see for yourself – it doesn’t have a website.

Stay: Where else but the Crab and Lobster? This award-winning restaurant is four miles north in Sidlesham, with B&B doubles from £190 a night (crab-lobster.co.uk). 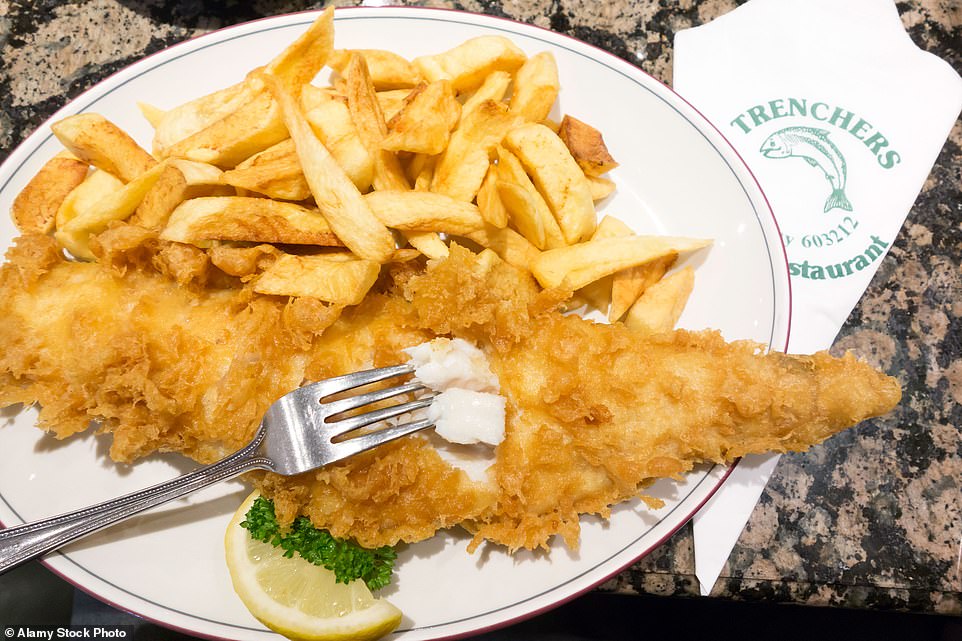 The reigning Best Restaurant in the National Fish & Chips Awards is Trenchers, bordering a Blue Flag beach in Whitley Bay

Winston Churchill called them ‘the good companions’, and they were first fried up and served together in the 1860s. Some 70 years later, spurred on by the boom in North Sea trawler fishing, there were more than 35,000 chippies across the country. Though fewer than a third remain today, it is still a British institution.

Stay: Whisky porridge and local Craster kippers are among the breakfast options at family-run guesthouse Park Lodge. Doubles from £95 B&B a night (parklodgewhitleybay.com).

The UK has oyster fisheries from Cornwall to Scotland, but some of the best are from Mersea Island, on Essex’s Blackwater Estuary.

Eat: Despite spartan appearances, The Company Shed in West Mersea is one of Britain’s great seafood restaurants (thecompanyshed.co).

Stay: Rooms at The Victory Inn have balconies overlooking the Blackwater. B&B doubles from £99 a night (victoryatmersea.co.uk).

WELL-BRED GINGERBREAD AND OTHER SWEET TREATS

Spicy-sweet gingerbread takes many forms around the world, but in Britain it’s often cooked in the shape of a human – an idea born in the court of Elizabeth I. The Shropshire town of Market Drayton claims to be its original home, while Grasmere Gingerbread, a hybrid that’s half biscuit, half cake, was invented in the Lake District in the 1850s.

Eat: Grasmere Gingerbread shop is in the heart of this pretty village (grasmeregingerbread.co.uk).

Stay: Lots of other amazing local produce is served in a spread they call ‘Cumbrian tapas’ at Grasmere’s Victorian House Hotel. B&B doubles are from £115 a night (victorianhousehotel.co.uk).

Although apple pies were created first, crumbles have held sway ever since their low-cost toppings found fans in the tough days of the Second World War. Various fruits can be used, but the most time-honoured are Bramley apples. These were first cultivated in the Nottinghamshire cathedral town of Southwell, which still has a harvest festival every October.

Eat: Apples are often at the heart of ‘crumble of the day’ at the Bromley At Fiskerton Inn, lining the River Trent (bromleyatfiskerton.com). 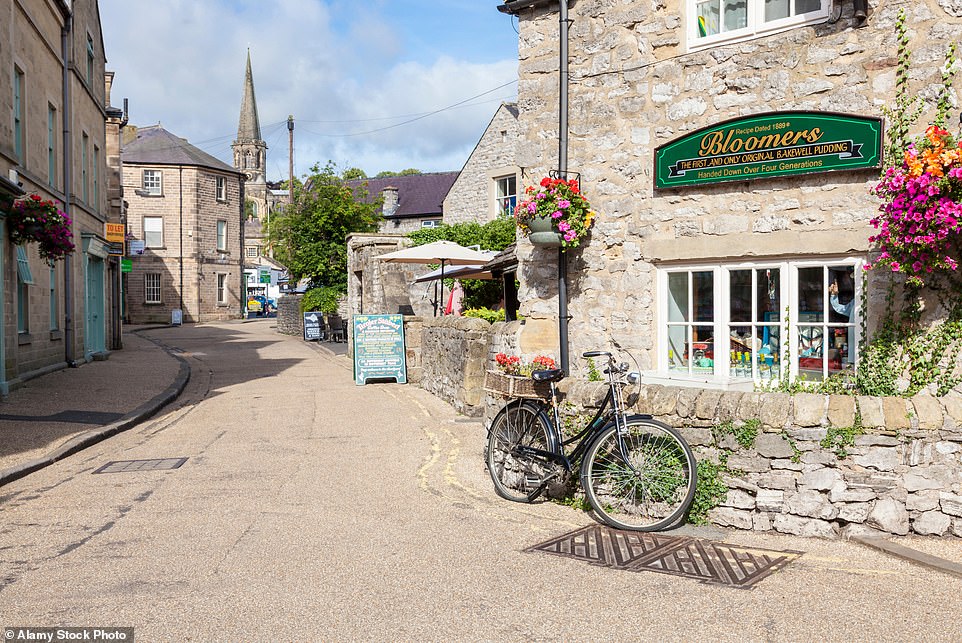 The Bakewell tart is actually a spin-off from the Bakewell pudding, which sees an egg-and-almond topping cover jam in a piece of puff pastry. Both hail from Bakewell in the Peak District.

Eat: The bakery Bloomers of Bakewell has both tart and pudding (bloomersofbakewell.co.uk).

Stay: On the Chatsworth estate, The Devonshire Arms’ bedrooms are cosy and full of country touches. B&B doubles from £120 a night (devonshirehotels.co.uk).

The best cream teas come with clotted cream from Cornwall or Devon. Monks at the latter’s Tavistock Abbey were busy making the treat seven centuries ago.

Eat: Mary Berry is a fan of Taylors, a classic Devonshire tea room in Ashburton on Dartmoor’s fringe (taylorsashburton.com).

Stay: Nearby, the 14th Century Gages Mill is a traditional B&B with an acre of gardens. Doubles from £85 a night (gagesmill.co.uk).