Over 4% US women use marijuana while pregnant

More than four percent of American women use marijuana while they are pregnant, new Centers for Disease Control and Prevention (CDC) data reveal.

And more than 80 percent said that they were told by doctors that marijuana could pose risks – such as low birth-weight – to their babies.

The CDC’s report only included data on women from eight states – only one of which (Maine) is among the top 10 places in the US where marijuana is most used – suggesting the real rate of marijuana use during pregnancy could be higher.

According to the report, women in Maine were most likely to use marijuana at any time, with more than 12 percent reporting they used the drug while pregnant.

It comes after a Canadian study found that autism was nearly twice as common among the children of women who used marijuana during pregnancy compared to those who did not, adding evidence to the risks of the widely used drug for developing embryos.

More than four percent of US women use marijuana while pregnant according to new CDC data – despite risks of low birthweight or autism for their unborn babies, 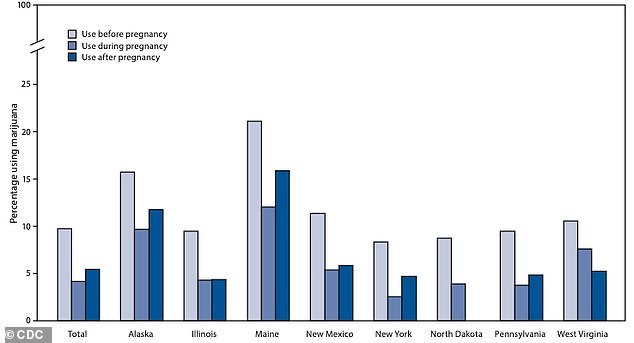 At least two percent of women in eight states reported using marijuana during pregnancy (medium-blue), with the highest rates among women in Maine, of whom 12% use the drug

Most obstetricians caution women against the use of marijuana while pregnant.

However, there is a lot left to learn about what exactly it might do to developing babies, and some dispensaries and health care providers even encourage the use of marijuana to quell morning sickness.

What is more well known is the risk of smoking in pregnancy.

Smoking increases the risk that babies will be born early, underweight and potentially with defects to their mouths or lips.

And although the research that established these risks was done on cigarette smoking, it’s hardly a stretch to extend the findings to marijuana smoke, which contains similar harmful, fine particles from burning plant matter.

The vast majority (91 percent) of pregnant women who reported using marijuana did so by smoking it.

In each state, at least two percent of the 7,688 women who participated in the surveillance system reported using marijuana during pregnancy.

Rates were lowest in New York, where 2.6 percent of women used marijuana.

In total, 413 women said they used marijuana during pregnancy, and 81.5 percent said they did so to help alleviate anxiety and stress.

Nearly 78 percent felt it helped ease symptoms of nausea (often associated with pregnancy) and 55 percent said it helped with pain.

More than 80% of women said the reason they used marijuana while pregnant was to alleviate stress and anxiety (top). Other common reasons were to ease nausea, pain or a chronic condition – or simply to have fun

Another 46 percent of women said it was a form of recreation for them, while about a quarter said marijuana helped them cope with a chronic condition.

Many women used marijuana in combination with cigarettes and alcohol,  each of which come with their own risks for both mother and developing baby.

Research has suggested that women who use marijuana during pregnancy are 50 percent more likely to deliver a baby with a low birth-weight.

And rates of autism were found to be twice as high among women who used marijuana while pregnant in a recent study from Ottawa University.

The incidence of autism was four per 1,000 person-years among children exposed to cannabis in pregnancy, compared to 2.42 among unexposed children.

‘There is evidence that more people are using cannabis during pregnancy,’ said senior study author Professor Mark Walker, of the University of Ottawa in Canada.

‘This is concerning, because we know so little about how cannabis affects pregnant women and their babies.

‘Parents-to-be should inform themselves of the possible risks, and we hope studies like ours can help.’

Tags: Centers for Disease Control and Prevention (CDC)dailymailhealthmarijuanapregnantWomen
No Result
View All Result