Incredible images of lions in Africa by renowned photographers

Best things to see and do in 6 towns

British Airways workers at Heathrow voted to strike this summer

Incredible images of lions by renowned photographers underscore the tragedy of their battle for survival, with the animals now extinct in 26 African countries

To help bring this tragic decline into focus and to celebrate World Lion Day on August 10, the ‘New Big 5’ project – which is asking the public to vote for animals they’d most like to see in the wild and photograph – has given MailOnline Travel a stunning set of lion images by renowned photographers to publish.

The New Big 5 points out that lions are already extinct in 26 African countries and have vanished from over 95 per cent of their historic range. They are on the brink of extinction in all but the largest and best-managed national parks, it warns, with the species threatened by the illegal bushmeat trade, habitat loss and fragmentation, and unsustainable trophy hunting.

To help shield these magnificent creatures, the New Big 5 is helping to raise vital funds to support big cat charity Panthera, whose Project Leonardo seeks to ensure the long-term survival of lions across the African continent by increasing the total lion population by 50 per cent over the next 15 years, to at least 30,000 lions.

‘As we celebrate another World Lion Day, pausing to acknowledge this extraordinary wild animal, we must also recognise the particularly fragile state of this species,’ says Panthera Lion Programme Director, Dr Paul Funston. ‘Lions are disappearing right before our very eyes. Urgent action from the global community through financial support of lion range states and conservation organisations like Panthera to protect these wild cats is one of the most critical ways in which we can help to grow, rather than lose, Africa’s lions by World Lion Day 2021.’

Graeme Green, British wildlife photographer and New Big 5 project founder, said: ‘Lions are one of my favourite animals to photograph and to spend time with. It’s impossible to imagine Africa without lions. As well as being incredible animals, they’re also vital to the natural balance and the future of Africa.’ Scroll down to see images that highlight the beauty, power and majesty of animals Graeme describes as ‘wildlife icons’… 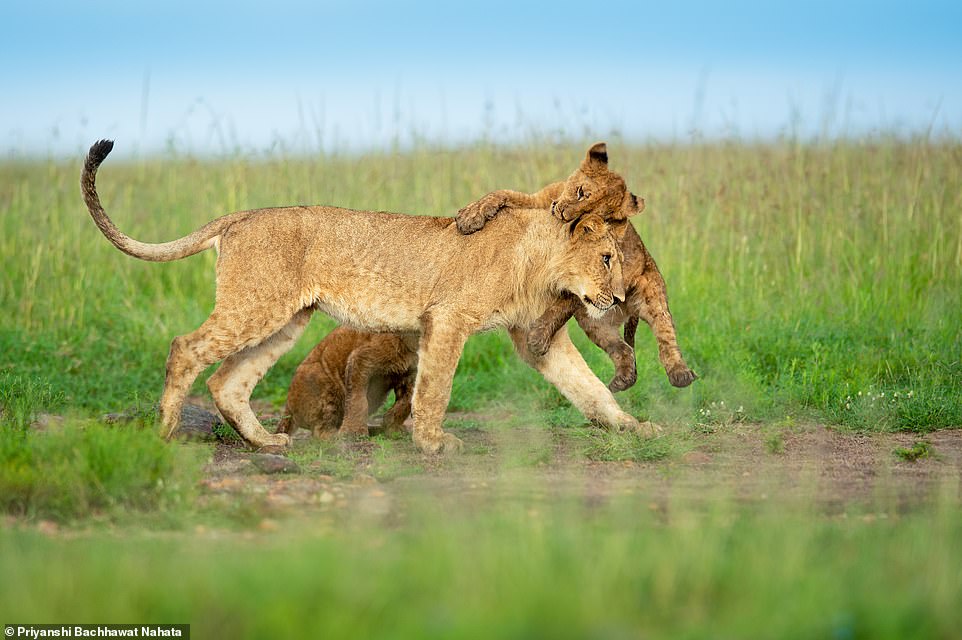 Aww-some: Playful lion cubs and a lioness in the Masai Mara captured by Priyanshi Bachhawat Nahata. Today, there are only about 20,000 wild lions in Africa compared to 200,000 just over a century ago 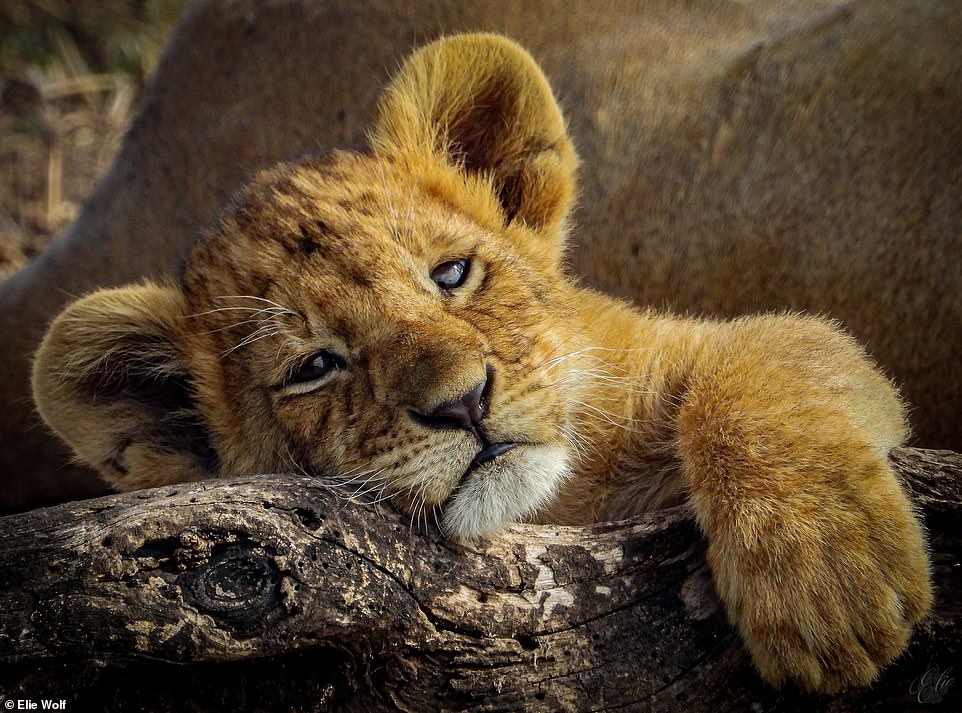 Need a cat nap? This sleepy-looking cub in Tanzania’s Serengeti National Park – caught on camera by photographer Elie Wolf – looks like it might 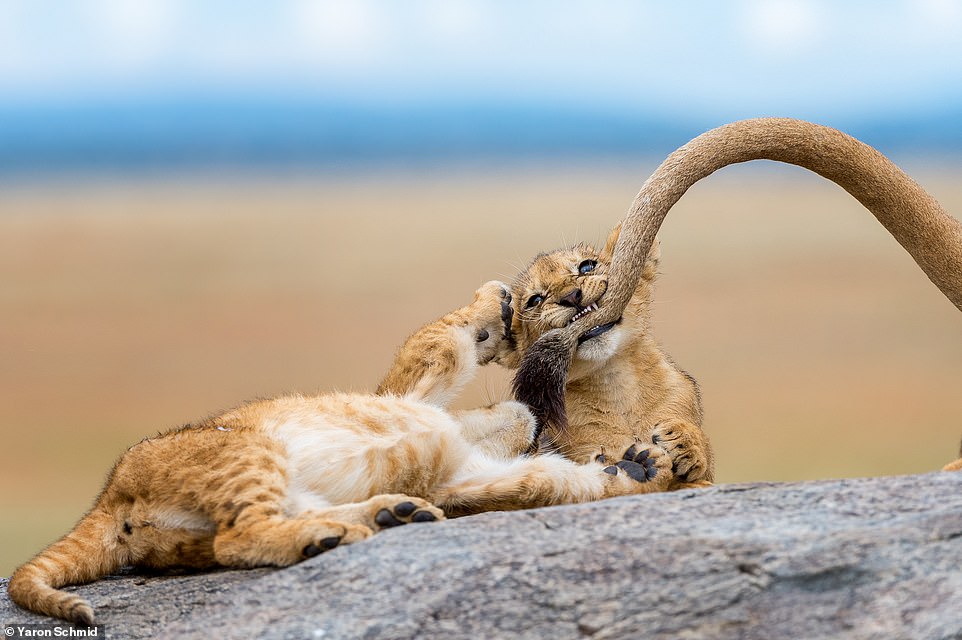 Ouch: A cheeky cub mischievously bites an adult tail during playtime with another cub in an adorable scene shot by Yaron Schmid in the Serengeti National Park 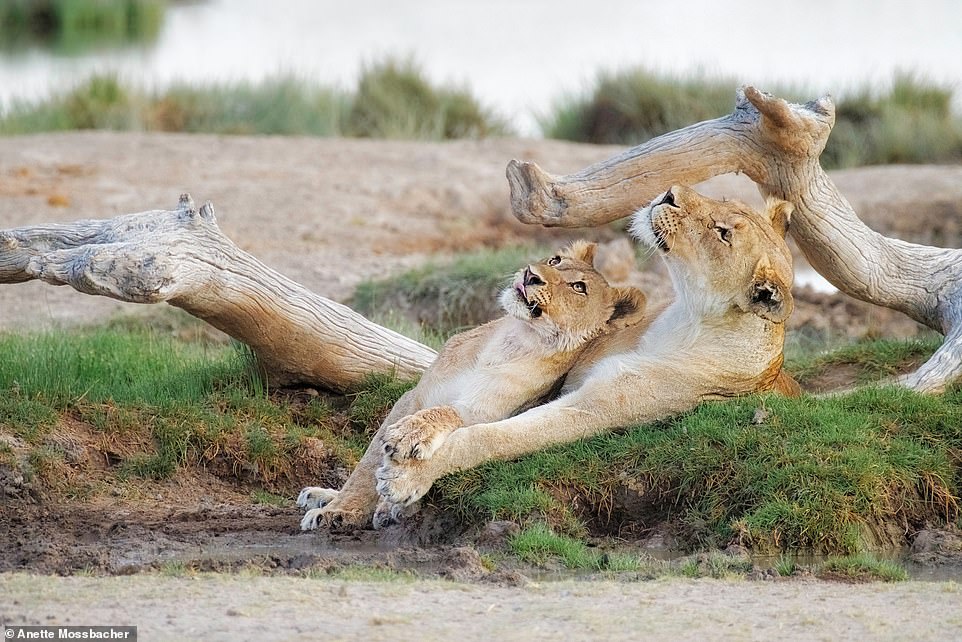 Dr Paul Funston from big cat charity Panthera says that while marking World Lion Day ‘we must also recognise the particularly fragile state of this species’. This heartwarming scene was captured by Anette Mossbacher in Etosha National Park, Namibia 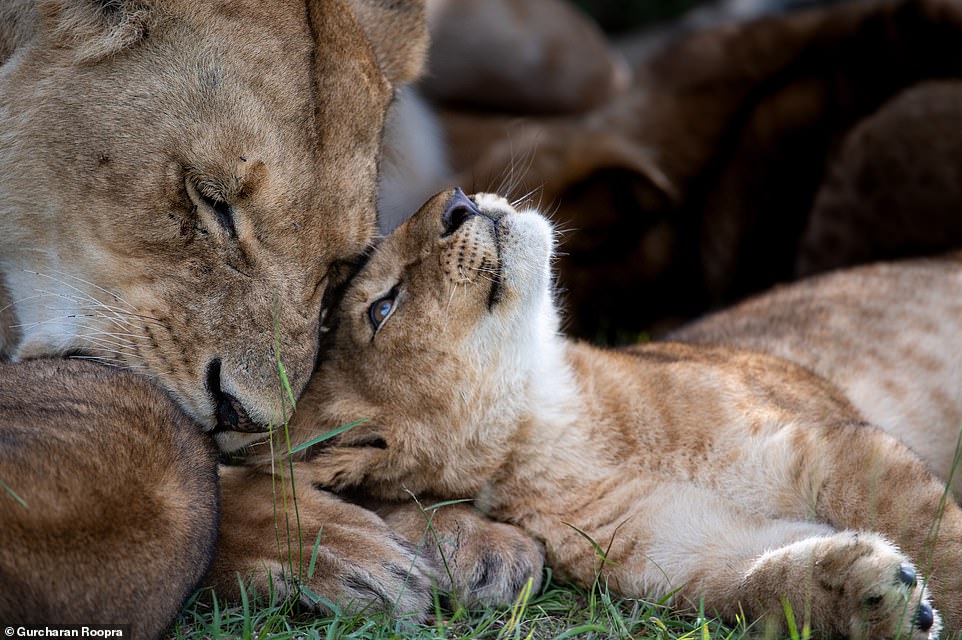 Lions, including these in the Masai Mara snapped by Gurcharan Roopra, are threatened by the illegal bushmeat trade, habitat loss and fragmentation, and unsustainable trophy hunting, says the New Big 5 project 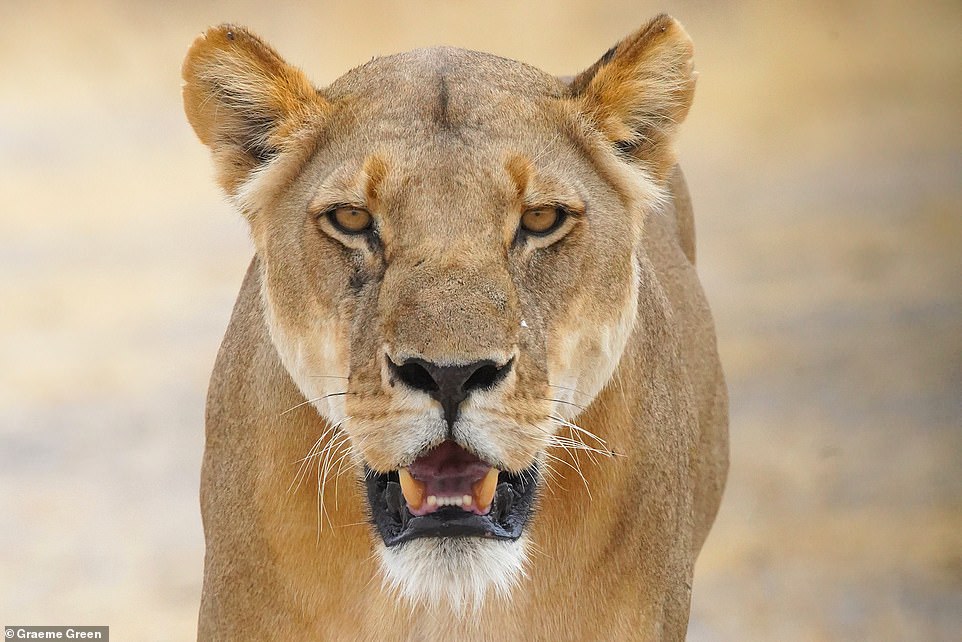 ‘Lions are one of my favourite animals to photograph and to spend time with,’ says Graeme Green, the British wildlife photographer behind this incredible shot snapped in the Selous Game Reserve in Tanzania. He is the founder of the New Big 5 project 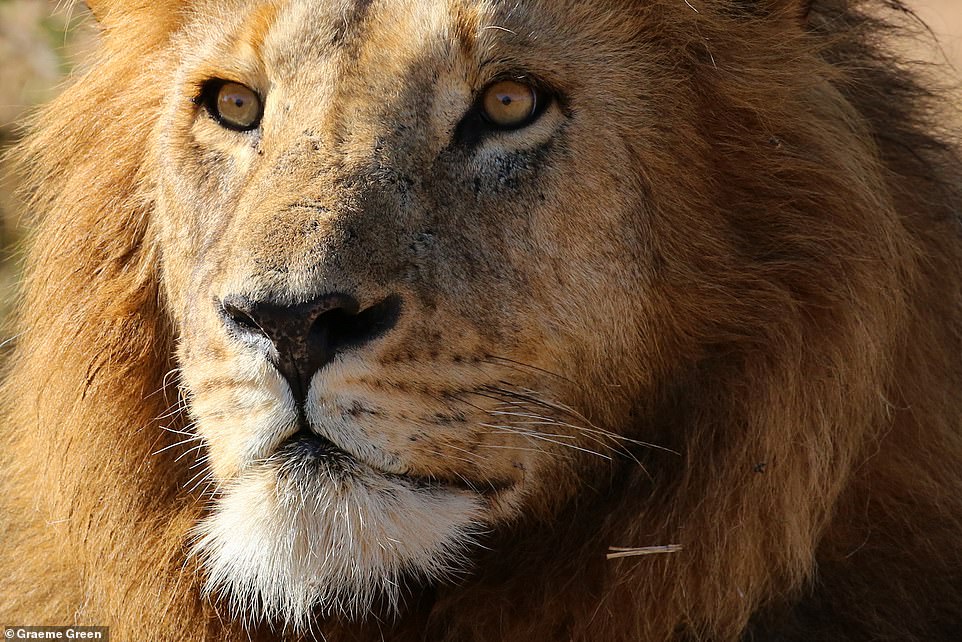 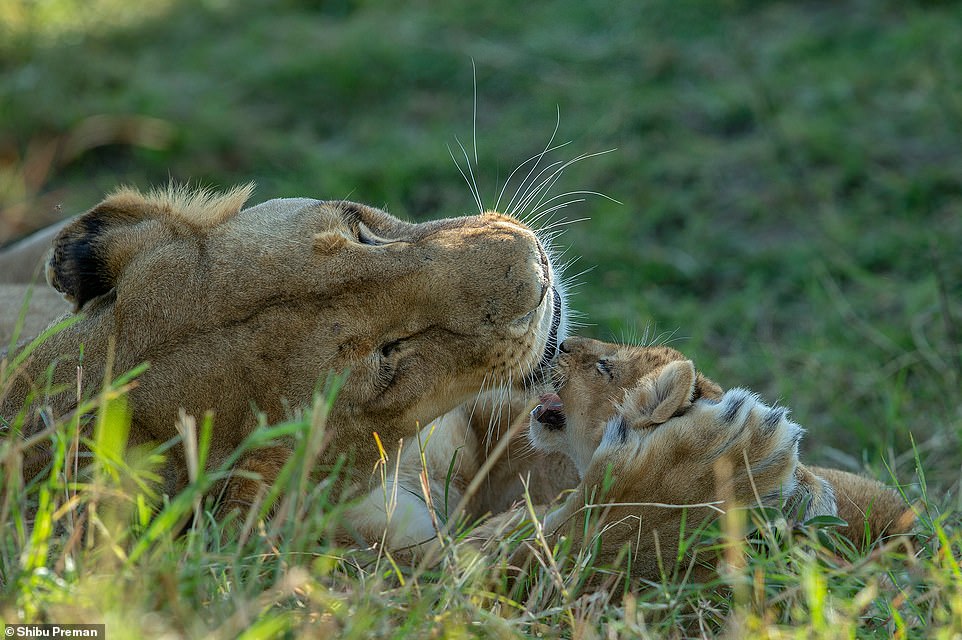 Charity Panthera is hoping to help increase the total lion population by 50 per cent over the next 15 years, to at least 30,000 lions. If they succeed, hopefully there will be more tender moments like this one, which was captured in the Masai Mara by Shibu Preman 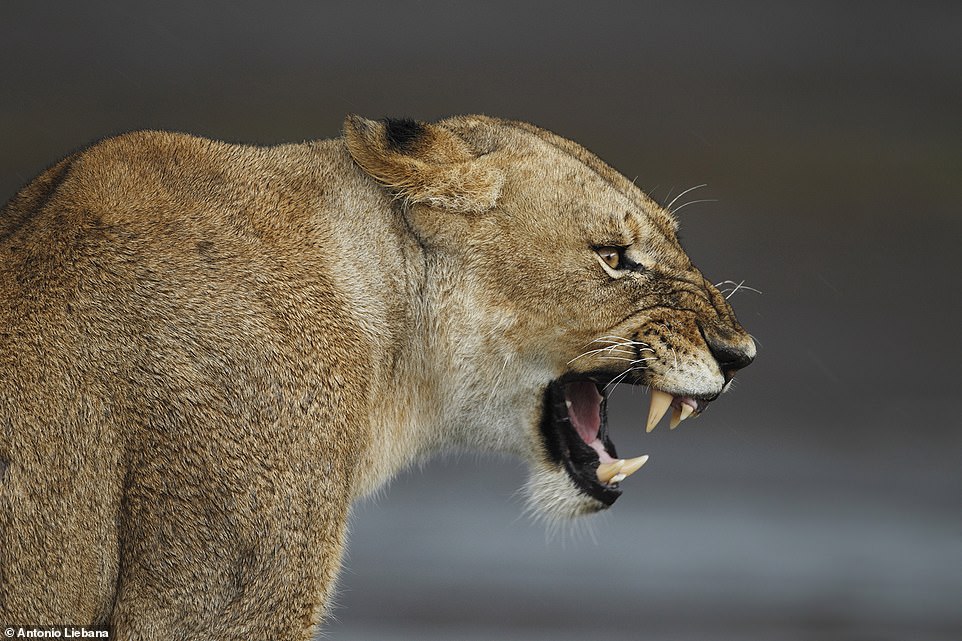 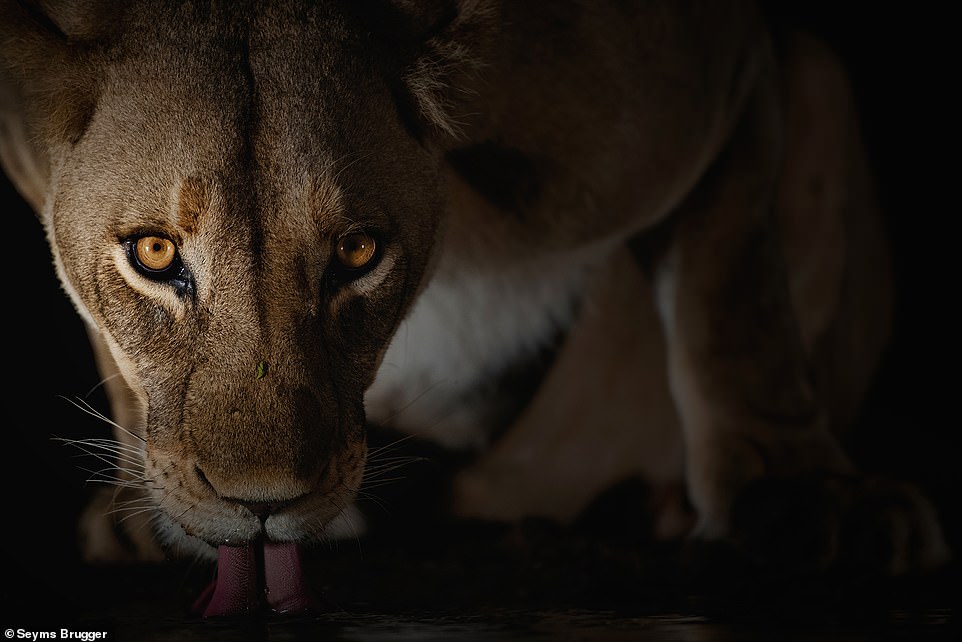 A fabulous female lion takes a drink under cover of darkness in South Africa’s Zimanga Game Reserve. The incredible image was snapped by photographer Seyms Brugger 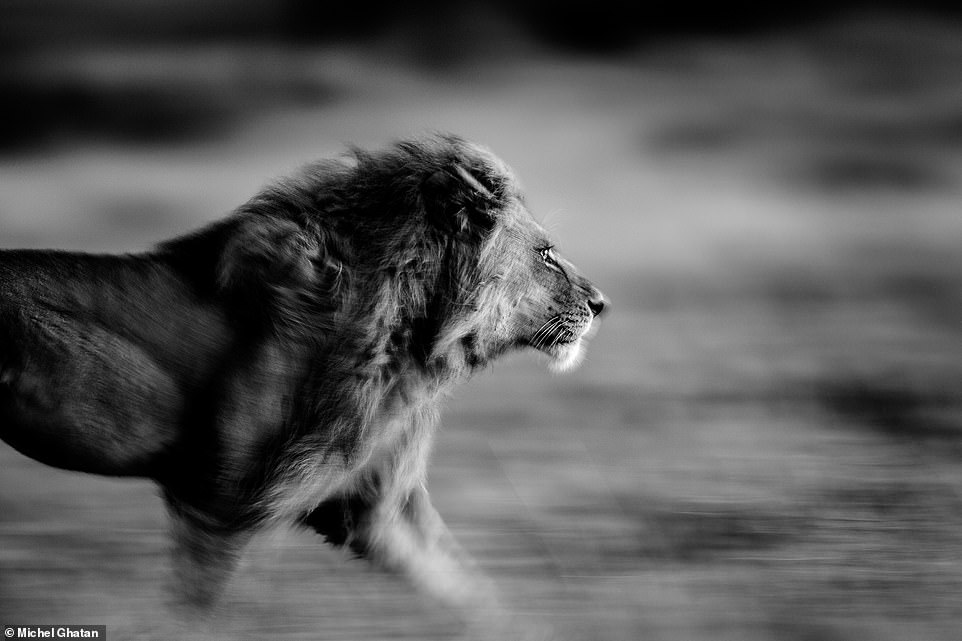 Lions are already extinct in 26 African countries and have vanished from over 95 per cent of their historic range, says the New Big 5 project. This majestic lion was snapped by Michel Ghatan in Serengeti National Park