Can the Pill turn you GAY? Growing number of women report bizarre symptom

Contracts are being awarded through the RADx program, announced in April, after the Trump administration and US health agencies were panned for shortages of and flawed tests.

The US is now testing more than 800,000 people a day – but concerns over accuracy remain, including revelations that the widely distributed Abbott test, which was used by the White House may return false-negatives.

As cases now surge in the South and West and new hotspots emerge, labs are buckling under high demand for diagnostics, and experts say the US needs o be running as many as 10 million tests a day to adequately keep up with the pandemic.

The NIH promised that tests authorized or in development from Mesa Biotech, Quidel, Ginkgo Bioworks, Talis Biomedical, Helix OpCo, Fluidigm and Mammoth Biosciences would help expand and speed testing in the US to deliver accurate test results inexpensively.

Each of the seven tests has been through a ‘Shark Tank’ style development and review process and the investment will go toward scaling up the new tests.

In a Friday press call, the NIH said that, in addition to the tests from Mesa and Quidel, the funding will go to scaling up the other new diagnostics so that they can run up to ‘millions of tests per week as early as September 2020,’ collectively said director Dr Francis Collins.

The NIH is investing nearly $250 million in seven new coronavirus tests, including the Sofia platform by Quidel, a point-of-care diagnostic

Currently, the vast majority of coronavirus tests being used in the US are molecular tests that isolate and amplify bits of genetic material or enzymes specific to SARS-CoV-2.

These types of tests are the ‘gold standard’ of diagnostics, but they’re not perfect and most have to be sent out to labs for analysis, creating longer wait-times for results or backlogs.

NIH’s RADx (Rapid Acceleration of Diagnostics) program was launched in April to encourage and accelerate companies to innovate new tests for COVID-19.

It’s one of several White House initiatives geared toward harnessing the private sector to address the coronavirus pandemic.

More than 600 companies have applied to take part and 100 were selected to go through a one-week ‘shark tank’ process, 31 moved forward into a month-long second iteration, and seven have now been chosen to be scaled up.

Three of the tests are point-of-care diagnostics, meaning they can be deliver results at the same clinic where a patient was swabbed, rather than being sent out to a lab for analysis.

The other four are lab diagnostics, but use different technologies – called platforms in the diagnostics world – to test for coronavirus.

THE NEW NIH-FUNDED TESTS THAT WILL DELIVER ON-SITE RESULTS

Like most diagnostics already in use, Mesa’s tests for traces of viral DNA in a sample swabbed from a patient’s nose or throat.

But Mesa’s advantage is in it’s immediacy and portability.

The entire test is contained in a hand-held device with single-use cartridges. It delivers results in 30 minutes.

Mesa’s test was given emergency use authorization by the FDA in March, but will be able to scale up its tests with the NIH investment. 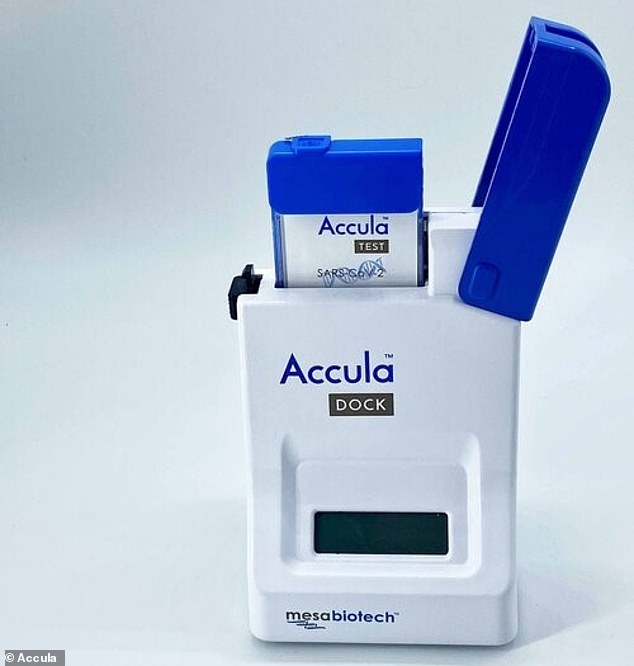 Rather than looking for bits of viral RNA, Quidel’s is an antigen test, which looks for SARS-CoV-2 via elements of the virus that reside on its surface. These are easier to find, chemically speaking.

That make the test comparatively faster, but antigen tests have a higher probability of false-negatives.

The NIH noted that tests that are slightly less accurate may be more useful in settings like business reopenings where the issue is less identifying a patient in immediate need of treatment, but more about detecting a possible outbreak.

Already, Quidel has thousands of its Sofia Analyzers distributed across the US. Specifically, the Department of Health and Human Services (HHS) has specified that Quidel’s test is a good one for nursing homes, where cheap, regular testing and fast detection of outbreaks are matters of life and death.

Similar to Mesa’s, Talis’s test is a cartridge-based test that identifies viral RNA on the spot, but using a different technology.

The company says its test delivers results in under 30 minutes. 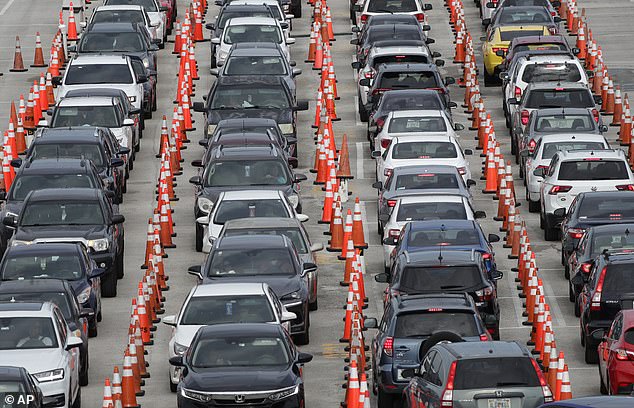 US labs are overwhelmed as both coronavirus cases and demand for tests surges in places like Florida, where hundreds of cars lined up for drive-thru testing earlier this month

NEW TECHNOLOGIES FOR LABS RUNNING THOUSANDS OF TESTS AT A TIME

The Boston-based company is making a lab based test, but one that uses automation to speed of the process.

Ginkgo’s machine can run thousands of samples at a time, thanks to the way that it sequences genes from the virus.

It can turn around results within one to two days. It anticipates being able to run 50,000 tests a day by September, ramping up to 100,000 a day by year-end.

Similar to GinkGo, Helix can process thousands of samples at a time on its machines.

Its test will specifically be sent to public health departments, large companies and health care systems that are in dire need of high-capacity testing. 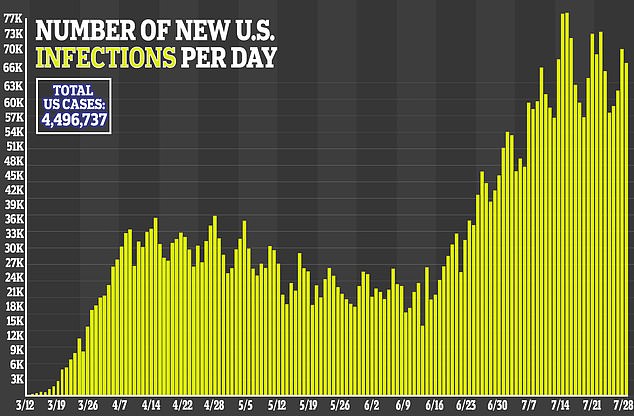 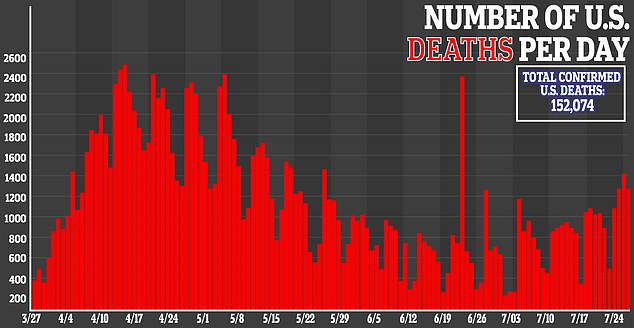 Fluidigm’s test uses ‘microfluid’ technology that makes the analysis process simpler and faster than that of a standard PCR (polymerase chain reaction) test.

It’s not yet clear how many tests a day, exactly, Fluidigm’s technology will be capable of running, but the NIH estimates it could do tens to hundreds of thousands daily by the fall.

Although it too makes a lab test, Mammoth’s is unique among the group.

The relatively young company was the first and remains the only test to get FDA approval for using CRISPR – the biochemical tool that allows scientists to edit genes – to detect coronavirus.

The CRISPR tool was designed to ‘find and replace’ faulty genes, but Mammoth has retooled it find coronavirus genes in samples from patients.

CRISPR does this with remarkable speed and accuracy, outpacing the CDC’s test.

Mammoth promises that, once its production is ramped up, its technology will lead to a ‘multi-fold’ increase in the amount of testing that can be done at labs.