Gene test could tell if your hip surgery will fail

The US has once again set a record-high number of coronavirus cases for the third day in a row, recording more than 63,000 new infections in a single day.

This breaks the previous record set on Wednesday of more than 62,000 and brings the total number of cases to more than 3.1 million.

So far, more than 133,000 Americans have died since the start of the pandemic with 990 deaths recorded on Thursday, the second-highest ever.

Deaths were previously trending downwards even as the number of infections surged across the country, but lately have begun catching up.

On Thursday, Florida reported 120 coronavirus-related fatalities, the most since the pandemic began Deaths in Texas also surpassed 100.

Hospitalizations have also been skyrocketing in multiple states with intensive-care unit beds at or nearing capacity, leaving doctors and nurses stressed and overwhelmed.

For the second consecutive day, the US has set a record-high number of coronavirus cases with more than 62,000 new infections reported in a single day (above)

‘We’re in a very difficult, challenging period right now,’ Dr Anthony Fauci, the top infectious disease experts in the US, said on Thursday during a teleconference organized by The Hill.

As the country began reopening, many states ‘jumped over the benchmarks,’ Fauci said, referring to indicators of a slowing infection rate required for states to begin phasing out of lockdowns.

President Donald Trump has openly said he disagrees with Fauci, and has continued to downplay the spike in cases.

‘For the 1/100th time, the reason we show so many Cases, compared to other countries that haven’t done nearly as well as we have, is that our TESTING is much bigger and better,’ he tweeted on Thursday. 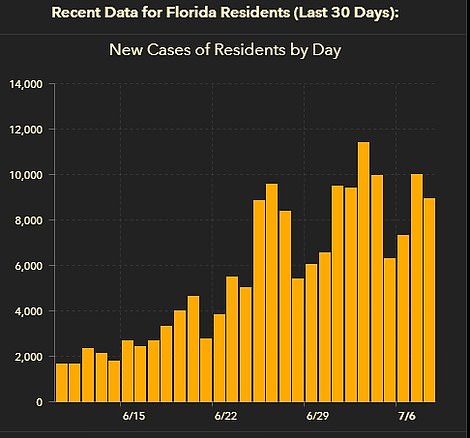 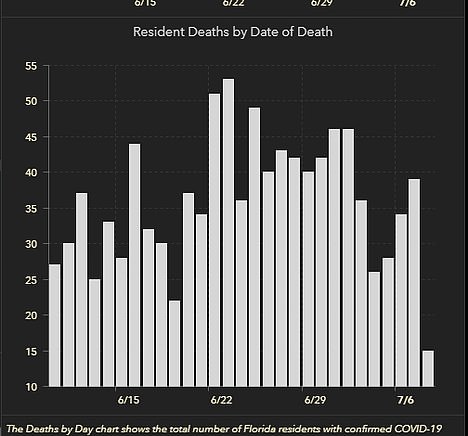 On Thursday, Florida recorded 8,936 cases (left) and 120 (right), the latter being a record high for the Sunshine State, bringing totals to more than 232,000 infections and more than 4,000 deaths 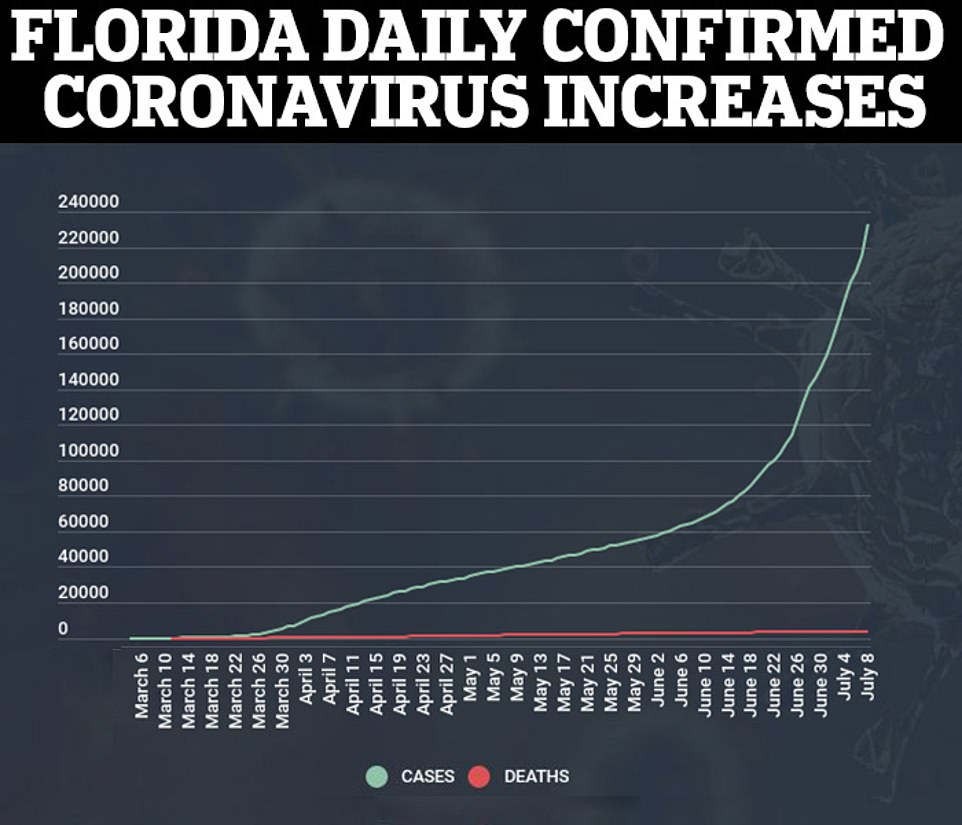 Despite Florida having the fourth-highest number of cases in the country, Gov Ron DeSantis has resisted reinstating lockdown measures and said he does not believe that mandating masks will help reduce the spread of the virus

The Florida Department of Health reported 120 deaths on Thursday, the highest single-day jump since the start of the pandemic in March.

Additionally, the Sunshine State recorded 8,936 cases, bringing the total to 232,718, the fourth-most in the country.

In Miami-Dade County, the local health department reported a 33.5 percent positivity rate, believed to be the highest in the state.

Despite record numbers of cases and deaths being reported, Gov Ron DeSantis said he believes Florida has ‘stabilized,’ but admitted he’d liked to see cases and deaths go back to May and June.

However, DeSantis has resisted reinstating lockdown measures and said he does not believe that mandating masks will help reduce the spread of the virus.

He also echoed President Trump’s comments that the rise of COVID-19 across the US is a result of more testing rather than increased spread.

‘There have been way more infections than documented cases,” DeSantis said during on Monday. ‘But it’s not really evidence that it’s more prevalent.’

A total of 9,689 patients have been hospitalized in Texas after testing positive for the virus, a 0.82% increase from the previous record set on Wednesday (above) 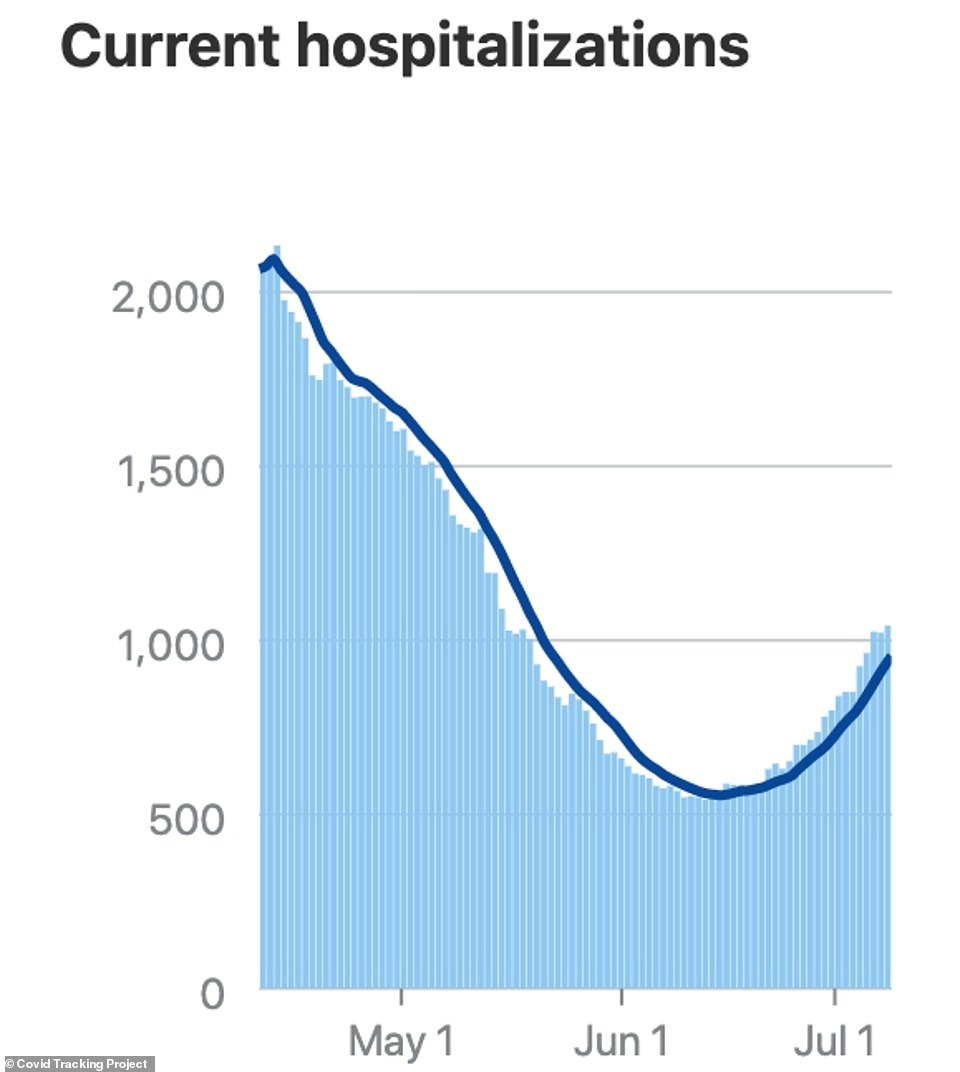 Un Louisiana, after reaching a low of 542 patients on June 13, the state rebounded as is now reporting 1,042 hospitalizations, the highest since May 15 (above)

Meanwhile, Texas set multiple coronavirus records with top officials warning that the worst is yet to come.

The Houston Chronicle reports that 9,689 patients have been hospitalized after testing positive for the virus, a 0.82 percent increase from the previous record set on Wednesday.

Currently, 953 ICU beds are available in the state, which is the first time since March 13 that Texas has had fewer than than 1,000 available ICU beds.

Another record set on Thursday was the amount of tests combing back positive over the past seven days, which  sits at 15.6 percent.

‘The numbers are going to look worse as we go into next week,’ Gov Greg Abbott told local station KRIV-TV in Houston on Thursday.

In a stark contrast from the beginning of the pandemic, during which he was resistant to wearing masks, Abbott now begged people to wear them.

Abbott said he understands the face coverings may be uncomfortable, but that’s ‘the only strategy we have left to avoid having our economy shut down again.’

‘The last thing we want to do is shut things down again,’ he told KRIV-TV. 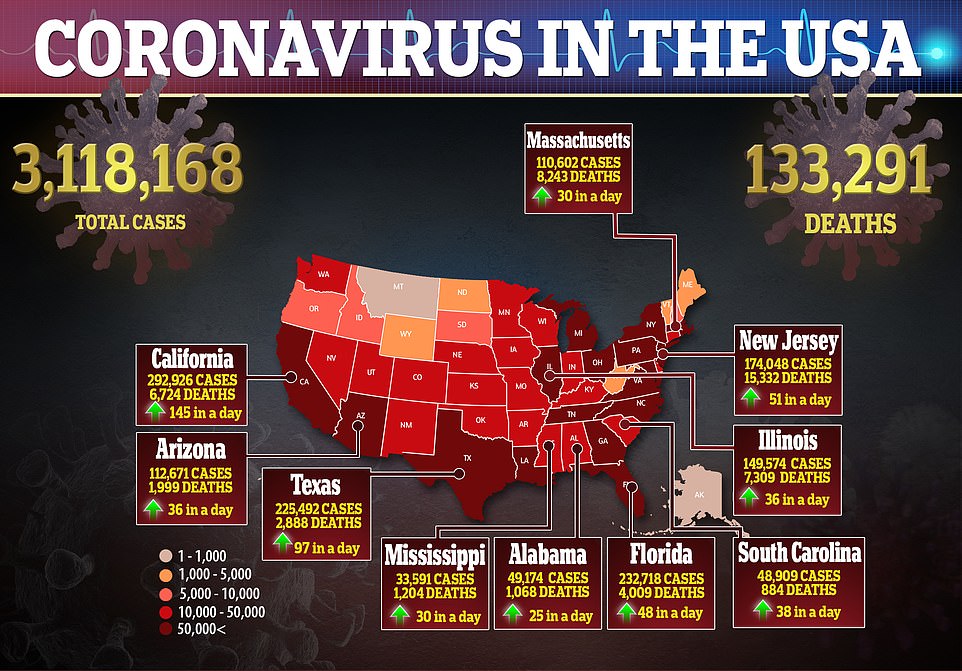 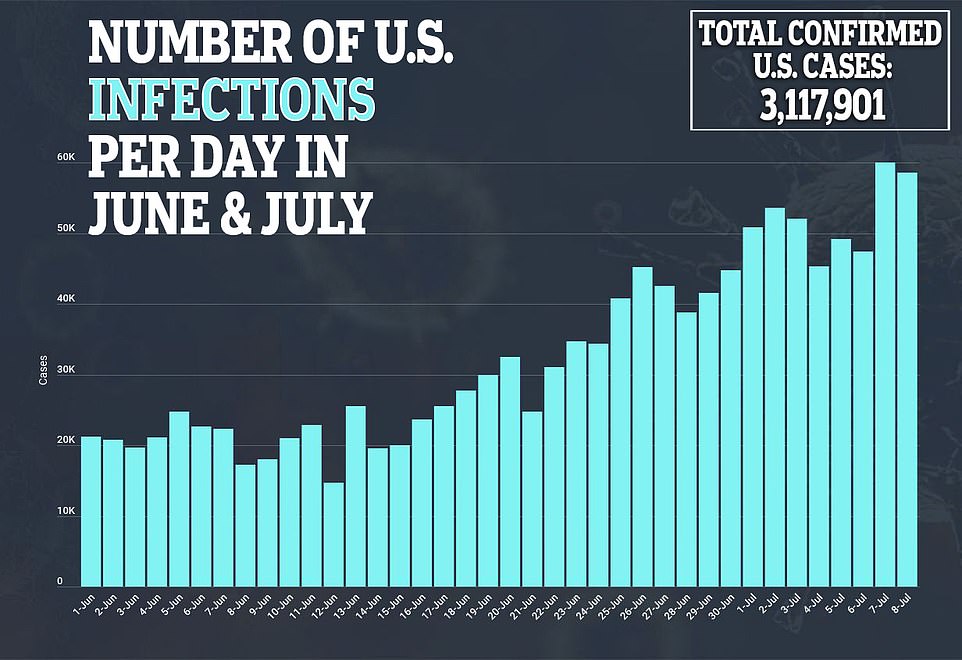 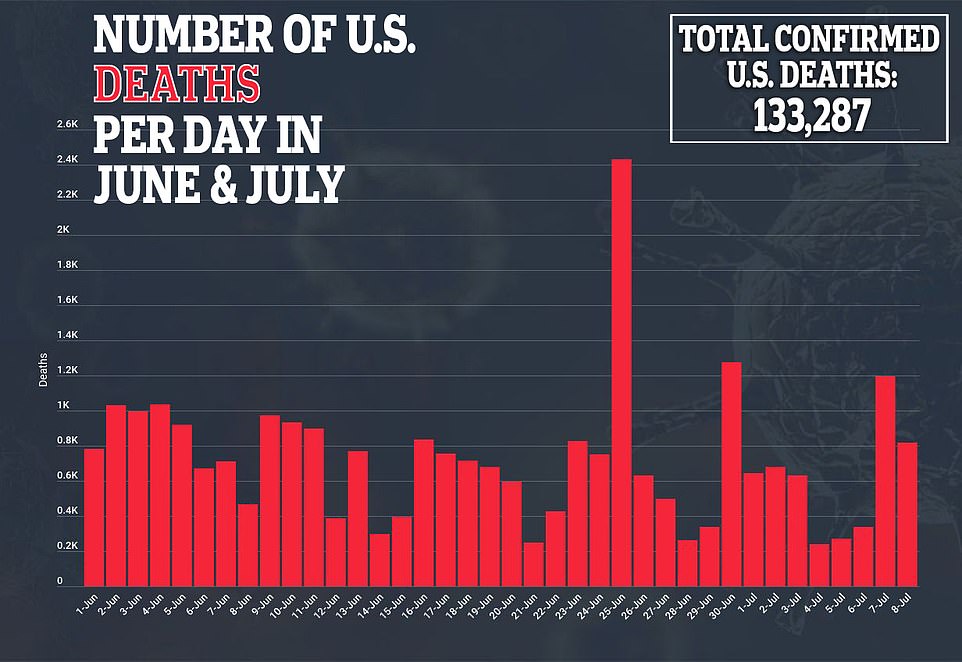 Hospitals in several states are beginning to feel the strain as their beds become full and staff becomes overwhelmed.

And in Louisiana, after reaching a low of 542 patients on June 13, the state rebounded as is now reporting 1,042 hospitalizations with 110 of those patients requiring ventilators.

That’s the highest level in the state since Phase 1 reopening began on May 15.

On Wednesday, Louisiana’s Gov John Bel Edwards said the state is ‘going in the wrong direction’ and has wuped nearly erasing all the gains it had made against the virus in just three weeks.

In Florida, nearly half of the state’s intensive-care units intensive care units are 90 percent full while at least 20 percent have reached capacity, state data shows.

At least 46 others had just one bed available.

‘Three months ago, everyone joined in a shared goal of flattening the curve, which was temporarily accomplished,’ Larry Antonucci, CEO of Southwest Florida’s Lee Health hospital system told USA TODAY.

‘The curve is no longer flat. Instead we have a spike in cases and the spike is growing fast.’