Testing travellers for coronavirus one week after they arrive into the UK could catch virtually all imported cases and solve Britain’s quarantine row, a study suggested today.

Modelling by the London School of Hygiene and Tropical Medicine found isolating people for seven days then testing them could catch 94 per cent of infections coming from high risk countries.

Researchers behind the study are urging the UK Government to consider imposing the strategy because they fear people won’t comply with the lengthy two-week rule currently in force.

Travellers and British tourists returning from Spain were told over the weekend they now have to self-isolate for 14 days amid rising cases there. Other EU countries, such as Belgium and Luxembourg, could also be removed from the safe travel list as early as tomorrow because of growing outbreaks on the continent.

The Government is under mounting pressure to reduce the quarantine period amid concerns it will ruin summer holidays and stop holiday-making Britons from earning a wage when they come home. But ministers today warned there is currently no ‘viable alternative’ to the isolation rules.

Heathrow Airport bosses today suggested testing at the border could be the answer to slash the 14-day quarantine rule and prevent the travel industry haemorrhaging money.

They were backed by Conservative MP David Davis who said’: ‘Heathrow boss is right to call for airport testing to replace hard quarantines. Vienna has been doing this for months. I don’t understand why we haven’t.

‘Nothing is perfect, you are as likely to catch the virus on the London underground back home as you are on the plane or on holiday.

‘On a 14 day holiday there is an 80% chance someone infected will manifest symptoms at the airport. If this is the case everyone on the plane should be quarantined. US companies like Cepheid can turnaround a test in 30 minutes.

But LSHTM researchers poured cold water on the plans, warning swabs at British airports would only catch half of infected people and let thousands slip by.

They also said infected people who get negative results at the border may get false confidence from the test and ignore their symptoms when they develop.

It can take a number of days from infection before tests pick up Covid-19, meaning a negative result on arrival does not mean the passenger will not fall ill later down the line.

Belgium and Luxembourg could be removed from the safe travel list as early as tomorrow and Croatia could also be at risk. Luxembourg has the highest incidence of coronavirus cases per 100,000 people in Europe 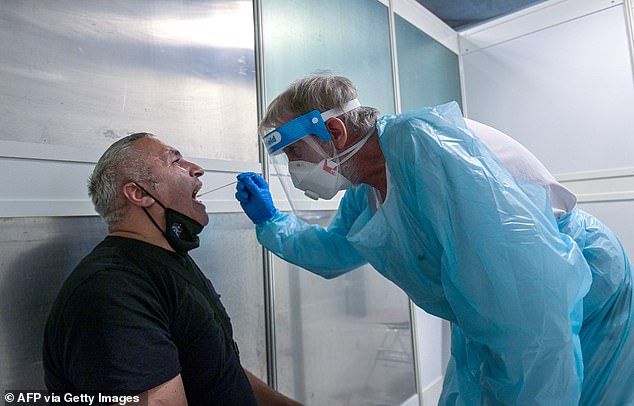 London School of Hygiene and Tropical Medicine modelling has found testing for Covid-19 upon arrival at British airports only catches 50 per cent of infections. Pictured: A passenger is tested by a doctor at a coronavirus screening station in Duesseldorf airport in western Germany 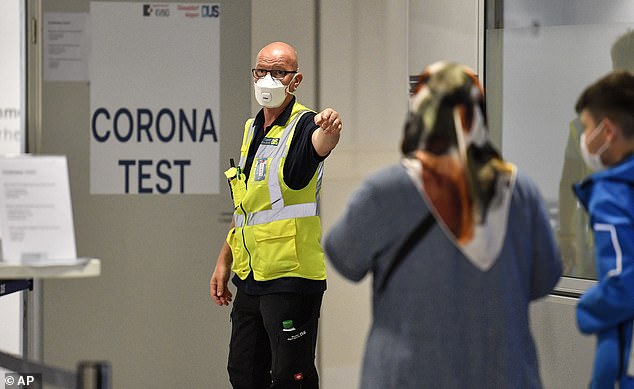 But testing travellers from high-risk countries one week after they arrive into the UK could catch virtually all imported cases and solve Britain’s quarantine row. Pictured: A guard points to arriving passengers for a Covid-19 test in Dusseldorf

The latest study, which has not yet been peer-reviewed or published in a scientific journal, used mathematical modelling to simulate different quarantine strategies.

They estimated the number of infected people flying to the UK from the US and Europe based on monthly flight records and the disease prevalence abroad.

The team said the current 14-day quarantine measures were still the most effective, and can prevent 99 per cent of cases if everyone adheres to the rules.

But they found a quarantine period of seven days, followed by a negative test, could reduce imported cases to between zero and three a week from the EU and zero and four from the US.

Their mathematical model suggested that shortening this to five days would result in 80 per cent of cases being caught, because the disease would still incubating in a fifth of travellers who only caught it a few days before flying.

Revealing the study’s results today at a virtual press conference, lead researcher Dr Sam Clifford said: ‘The recommendation is that you need at least a week in quarantine.

‘But having a PCR test means it doesn’t have to be a full two weeks. Obviously we need to be mindful of how people are going to respond to having a long quarantine period.’

The epidemiologists also modelled the effectiveness of testing incoming travellers for the disease at British airports.

BUT GOVERNMENT INSISTS THERE’S NO ALTERNATIVE TO 14 DAY QUARANTINE

Ministers today warned there is currently no ‘viable alternative to the 14-day quarantine’ period for travellers returning to the UK from high risk countries.

Boris Johnson is believed to be worried that a second spike in infections in the UK could start within a fortnight after he expressed concerns about a surge in cases across Europe.

Mr Johnson has insisted the UK must reserve the right to impose travel restrictions at short notice in order to prevent a domestic increase in coronavirus.

But the travel industry is urging the Government to slash the 14 day quarantine period in order to make foreign travel more feasible amid such uncertainty, with the boss of Heathrow Airport suggesting testing at the border could be the answer.

Culture Secretary Oliver Dowden today poured cold water on the plan as he said at the moment there is not a ‘viable alternative’ to the fortnight in self-isolation.

He said: ‘The challenge we have here is that it’s not the case you can simply test somebody and be sure that they don’t have the disease.’

He added: ‘It can incubate over a period of time, so there’s not a silver bullet of just testing immediately at the border.’

Mr Dowden said he understood the travel industry’s ‘frustration’ with the current quarantine system but that currently there is no ‘viable alternative’.

He told BBC Radio 4’s Today programme: ‘I have heard [Mr Holland-Kaye’s] comments and I do understand his frustration and his desire for us not to impose quarantine.

‘If we could avoid imposing quarantine in a way that it was safe to do so then of course we would do that, that is why we keep it under review.’

He added: ‘Of course, we continue to look at all alternatives but we are not at the point where there is a viable alternative to the 14 day quarantine.

‘Indeed, in your question you alluded to the fact that testing even after a week does not catch every one.’

Mr Dowden said that people ‘should continue to book holidays’ but they needed to be ‘aware of that risk’ of quarantine being imposed.

The chief executive of London’s Heathrow Airport has called for people coming from high-risk countries to receive a swab on arrival in a bid to scrap the crude 14-day rule.

John Holland-Kaye said today the mandatory swabs could restore Brits’ faith in foreign holidays this year and prevent the travel industry from taking another hit.

But the LSHTM study found that testing passengers on arrival would only pick up 50 per cent of infected people.

Dr Clifford added: ‘There’s been some evidence that suggests people who get a negative test early on think they are probably OK and don’t need to be as strict [with quarantine].

‘There’s a lot of behavioural science that needs to go into it, we’ve only modelled the epidemiology. We haven’t modelled how people adhere to these different quarantine measures.’

Reacting to the findings, independent scientists said they ‘welcomed’ the finding that shortening quarantine times could still keep a lid on the epidemic.

Dr Andrew Freedman, an infectious diseases expert and honorary consultant physician at Cardiff University, said: ‘It is clear that a single negative PCR test on arrival is not sufficient to exclude COVID infection in travellers arriving into the UK from higher risk countries because of the incubation period which may be up to two weeks.

‘However, this modelling study from the London School of Hygiene and Tropical Medicine provides a strong argument in favour of shortening the quarantine period from the current 14 days to eight days, by performing a test on day seven after arrival.

‘This would have a very significant benefit to the individual traveller as well as the travel industry as a whole. It remains to be seen whether the UK Governments will be willing to adopt such a strategy.’

Prof Mark Woolhouse, Professor of Infectious Disease Epidemiology, University of Edinburgh, added: ‘This is a welcome illustration of the principle that testing can be used to reduced the need for quarantine.

‘One scenario not considered in this paper is testing at arrival and again a few days later. It is possible that a double testing strategy could be almost as effective as 14 days quarantine.

‘The paper does not go on to explore the public health consequences of imported cases, but this is another key issue.

‘If the R number is less than one (as in the UK at present) then imported infections will not spark major outbreaks – they present no more risk than infections from within the UK.

‘This changes dramatically, however, if the R number rises above 1. In that case any infection – imported or not – can spark a major outbreak and far greater caution is warranted.’

Mr Johnson yesterday warned there are ‘signs of a second wave’ of coronavirus in Europe as he defended the UK’s decision to reimpose quarantine travel rules on Spain.

A senior Government source said the PM was ‘extremely concerned’ by outbreaks ‘bubbling up’, both at home and abroad.

However, the decision to reimpose quarantine on Spain and the threat of the Government doing the same on other European countries is wreaking havoc with the travel industry.

Government advisers have warned it can take a number of days from the moment of infection before tests return a positive result, meaning testing negative on arrival does not mean the passenger will not develop symptoms later on.

But Public Health England and the Department of Health and Social Care are understood to have spoken with travel assistance company Collinson to understand the proposed testing pilot it is developing with Heathrow.