While it is true that Los Angeles does actually sleep (clubs and bars must close their doors at 2:00 a.m. here), there’s still plenty of life in the city’s nights. There are places to party past midnight all over town, offering up live music, DJs spinning tunes and even a slightly whacked-out floor show now and then. It’s easy to spot the newest places around town; just look for where the after parties (after movie premieres, after awards shows, after openings) are happening, for that’s a sure sign. It helps to be where the action is, near movie theaters and screening rooms, but it’s a fickle scene here, as one minute My House is the coolest place to be, the next it is DOA. We love the spots that keep on bringing the best the city has to offer for more than just a nanosecond, like The Mint for live music, The Abbey Food & Bar for a gay night out and The Conga Room for lively action with a Latin beat. But no matter which popular place you choose, do keep your eyes open, for this is the home of Hollywood’s royalty and you never know when someone very famous might go dancing past.

Photo courtesy of Sunset at EDITION photo by Loamis Rodriguez.

The hottest spot in Hollywood these days is Sunset at EDiTION, the new nightclub that’s part of the West Hollywood EDITION Hotel. The brainchild of Ian Schrager (of Studio 54 fame) in association with Marriott, the hotel and club have been jammed since opening in late 2019. Sporting 400 disco balls over a large dance floor and a VIP private area called The Sunset Room, the club is open Thursday, Friday and Saturday only. Lines form early and remain most of the night, as the capacity of the room is only 255 people. Specialty cocktails abound here and table bottle service is on (if you can snag a table, that is), but don’t expect to get fed here. Sunset is strictly a dancin’ and drinkin’ kind of place!

Recommended for Best Nightlife because: Everyone who’s anyone is hitting Sunset at EDITION in 2020 at least once.

Jenny’s expert tip: Valet park at the hotel to make your experience seamless; the club entrance is just around the corner.

Amazing marine life and an underwater restaurant: These Maldives resorts are guaranteed to thrill

10 hotels and retreats where you can do yoga with animals

Read more about Sunset at EDITION → 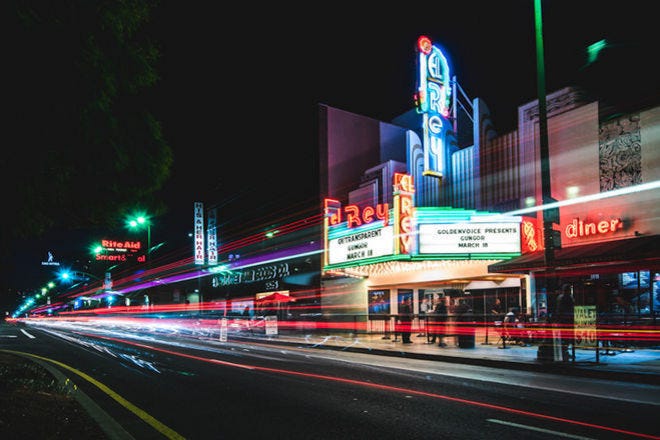 The El Rey Theatre has been a part of the Los Angeles nigthlife scene since 1994, but its history goes back much further, as is obvious with one look at its Art Deco building. Built in 1936 as a movie house and more recently designated as a historic-cultural monument, the architecture of the theater is worth a visit alone. Take in the stunning lobby with its sweeping staircases, massive chandeliers and grand ballroom (it’s available for private events) then plan to stand for most of the live concerts held here. These days it is part of the AEG family, hosting shows virtually every weekend, as well as some weekdays. Acts range across musical genres, with alternative rock leading the way.

Recommended for Best Nightlife because: The El Rey Theatre has been bringing newcomers and old favorites to perform at this centrally located venue for decades.

Jenny’s expert tip: Book VIP tickets for the balcony when available and you’ll get a place to sit. 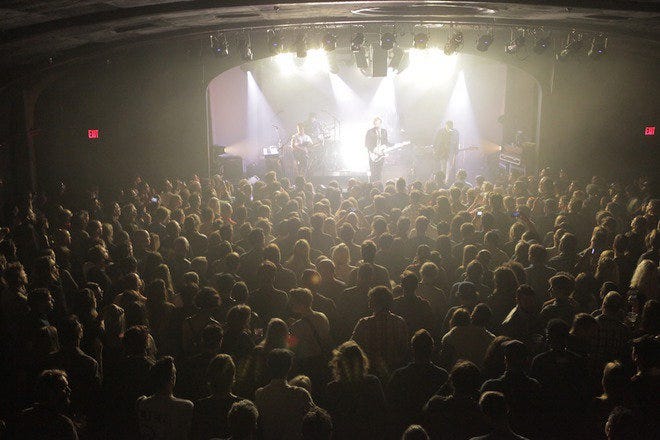 Teragram Ballroom has been a welcome addition to downtown Los Angeles, giving music-loving Angelenos another intimate venue to see live bands. This DTLA concert space is on 7th Street, just blocks from Staples Center and the Microsoft Theater, located in a renovated, century-old theater that was once a Hollywood movie palace. But unlike those two massive venues, the Teragram Ballroom only holds 600 people in this standing-room-only venue. The 9,000 square-foot theater offers special features for both artists and audiences: three dressing rooms, dedicated loading dock, spacious backstage, state-of-the-art sound system, three bars and a restaurant with plenty of space throughout to make the experience one of fun, rather than that of sweaty bodies jammed into a too-small space, all fighting to get the attention of a bartender. Instead, this well-thought-out venue makes one feel as if this is a perfectly planned dance party venue.

Recommended for Best Nightlife because: L.A.’s popular live-music dance venue, there’s not a chair in sight in the main theater, so dance you must when the bands are playing.

Jenny’s expert tip: The venue isn’t open every night, so check the website for shows before you go. 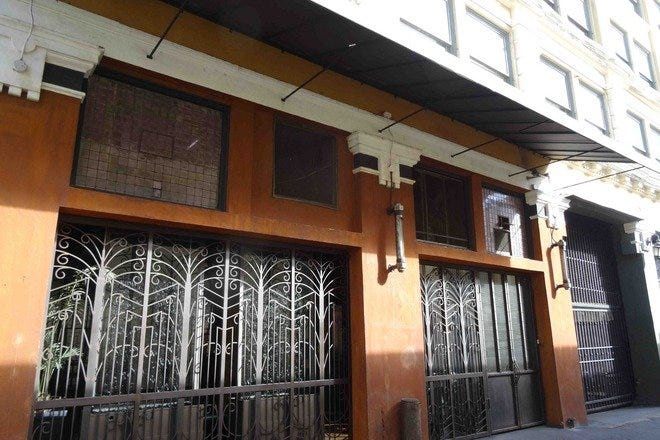 The Edison is an old-school club, a place that evokes the vibe of a swanky speakeasy from Prohibition days. From its almost-secret alley entrance to its self-avowed “sense of romance” which requires patrons to dress with a sense of style, The Edison is perfect for Hollywood’s love of dressing up. Which means do not show up in “athletic wear of any kind,” nor baggy or torn jeans, or other scruffy attire or you’ll be turned away. Men must wear collared shirts and dress shoes. Once inside, The Edison is a wonderland of sights and sounds, a sunken power station now transformed into a seductive club. You’ll find specialty cocktails (Absinthe, anyone?), fine wines and a menu ranging from snacks to full-on dinner choices. Live music, DJs and even an aerialist show are some of the entertainment; but note it is only open Thursday through Saturday most weeks.

Recommended for Best Nightlife because: There’s no other club quite like The Edison in any part of Los Angeles, which means you have to see this special speakeasy.

Jenny’s expert tip: Park in one of the nearby lots or use the valet service provided by The Edison on the corner of 2nd and Spring streets.

Read more about The Edison → 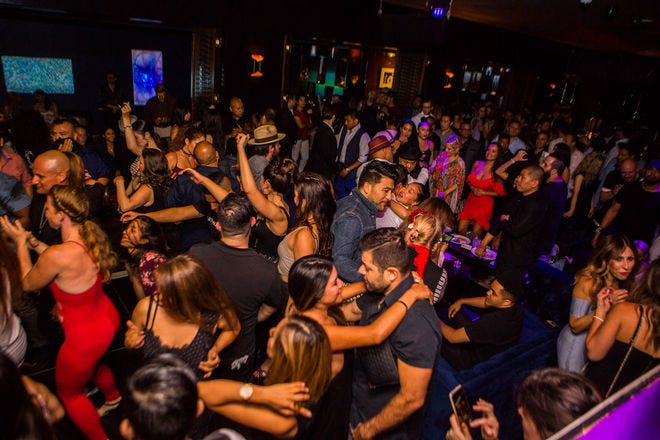 There’s always something happening at Riviera 31 inside the Sofitel Hotel, including jazz on Mondays. Every Monday Riviera 31 hosts Jazz Eclectic, featuring Ryan Cross and his band playing classics and new tunes. You never know who’s going to drop by, as previous star sightings have included Stevie Wonder and Imagine Dragons’ Dan Reynolds. Wednesdays are Salsa night, when they push back the furniture and dance until dawn. The lively vibe draws a sophisticated crowd who savor cocktails like the Palom-LA, a blend of Casamigos Blanco Tequila and grapefruit juice with a Kombucha Ginger Boost, and nibble on Mediterranean bites including lobster rolls, flatbreads and duck wontons. Snag a spot on the patio as the sun goes down and you may just find yourself there when last call is shouted. It’s the kind of place where you just want to hang out and enjoy.

Jenny’s expert tip: Stop in for the club’s “Aperitif” every weekday evening from 6 p.m. to 8 p.m. and enjoy specially priced cocktails, wines and tapas. 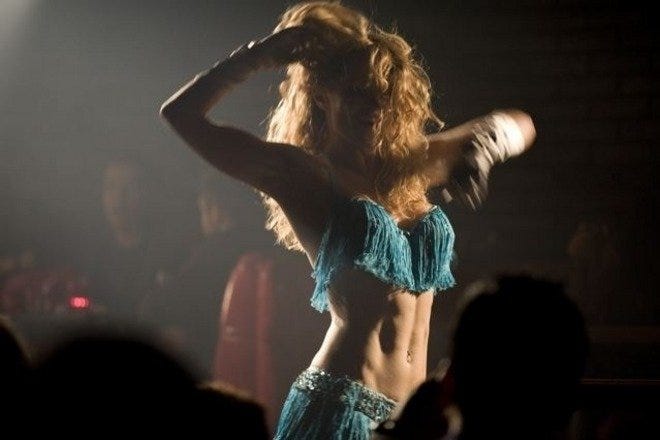 Small, dark, and handsome, Harvelle’s is one of L.A.’s favorites for live blues, rock and alternative music. In business since 1931, this Santa Monica landmark used to be a dark, smoke-filled dive, but nowadays it has gone sophisticated. The striking black-and-white decor gives the place a retro cool vibe, with the stage set off by its deep-red curtain backdrop. When popular bands come to play, the place gets jammed to the rafters, so you may want to arrive early to secure a seat. Whether you prefer the cutting-edge sounds of new rock artists or more traditional riffs from some of the greatest blues musicians alive today, you’re sure to hear something terrific at Harvelle’s.

Recommended for Best Nightlife because: Open since 1931, Harvelle’s is one of L.A.’s classic live-music nightlife joints.

Jenny’s expert tip: Get there early to grab one of the seats closest to the dance floor and bandstand, for they disappear fast. 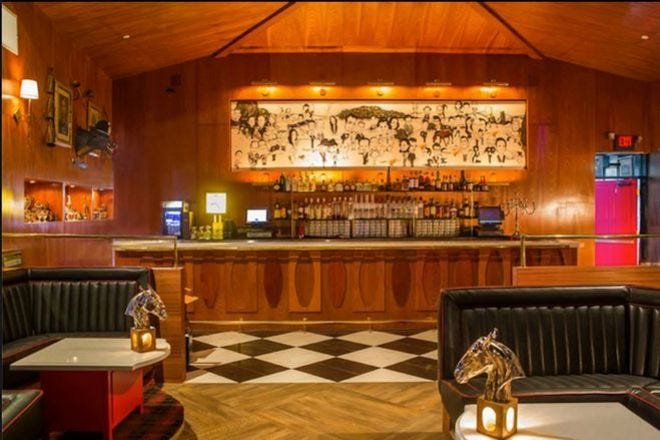 Photo courtesy of The Peppermint Club

The Peppermint Club used to be Hooray Harry’s, but now is transformed into a 1960s-inspired lounge designed to make listening to live music an up-close-and-personal experience, complete with high-end cocktails and bottle service. Open most nights a week (check their online calendar beforehand to make sure) and offering a state-of-the-art sound system, The Peppermint Club is a joint venture between the h.wood group (Bootsy Bellows, Poppy, etc.) and Interscope Records, which means music really is the focus of this fun retro nightclub. They welcome new musicians and DJs to join them â” there’s even a spot on their website for bands to apply for a gig.

Recommended for Best Nightlife because: This retro club has a terrific design, great sound system and a dedication to showcasing up-and-coming bands.

Read more about The Peppermint Club → 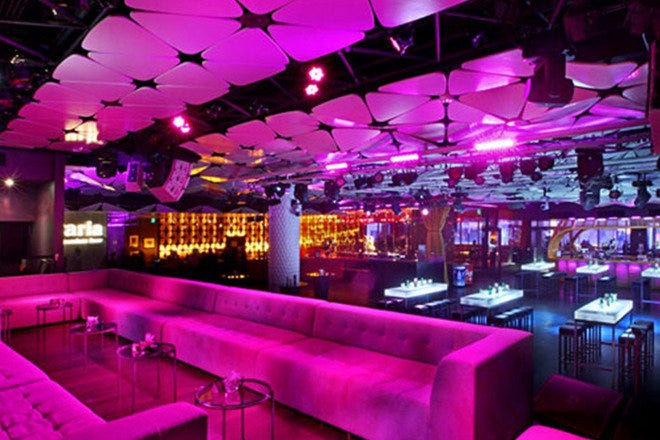 Photo courtesy of The Conga Room

The Conga Room is a convivial place located in the heart of L.A. Live in Downtown Los Angeles. A fixture in the nightlife scene, the club is owned by some famous names, including Jennifer Lopez, Will.i.am of the Black-Eyed Peas, Jimmy Smits, and NBA star Baron Davis. The owners are an eclectic group, which means that the club books plenty of different musical talent, from Latino greats like Willie Colon to the hottest DJs around. And every so often, superstars like Drake, Justin Timberlake or Kendrick Lamar turn up to play. And don’t miss trying the Pan-Latin fare at BOCA, the restaurant incorporated into the club.

Recommended for Best Nightlife because: Live music and plenty of dance floor space have made The Conga Room a top spot for Latin lovers (and more) since 1998.

Jenny’s expert tip: Check The Conga Room’s website to see who’s playing on the nights the club is open, Thursday to Saturday.

Read more about The Conga Room → 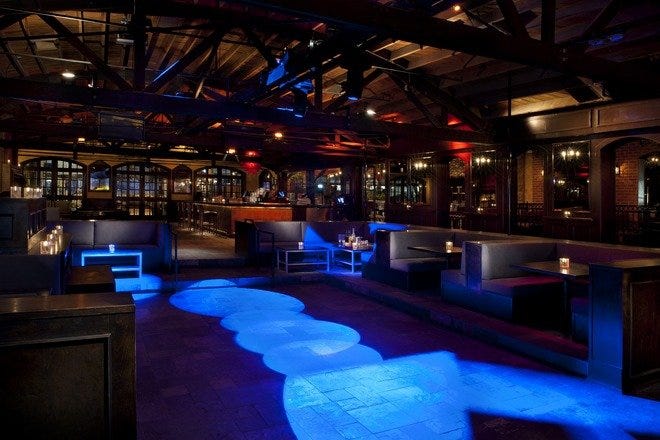 Photo courtesy of The Abbey Food and Bar

Located in West Hollywood, the center of L.A.’s gay community, the Abbey Food & Bar is a fixture in that neighborhood that’s also known as “Boys’ Town.” The club is famous for its big martinis, sexy go-go dancers and slightly decadent vibe â” with four dance floors pulsating all night long, it’s no surprise that there’s often a line out the door. But the Abbey is more than a meat market, as owner David Cooley uses his famous club as a forum for advocating equal rights for the entire LGBT community. Don’t miss his annual fundraising Oscar party, for you’re sure to see some famous Hollywood faces in that crowd â” and most other nights, in fact.

Recommended for Best Nightlife because: This legendary gay club in the heart of West Hollywood has been satisfying its mostly male clientele since 1991.

Jenny’s expert tip: The Abbey’s annual Oscar party is one of the hottest tickets in town, so be sure to reserve a table early for that one. 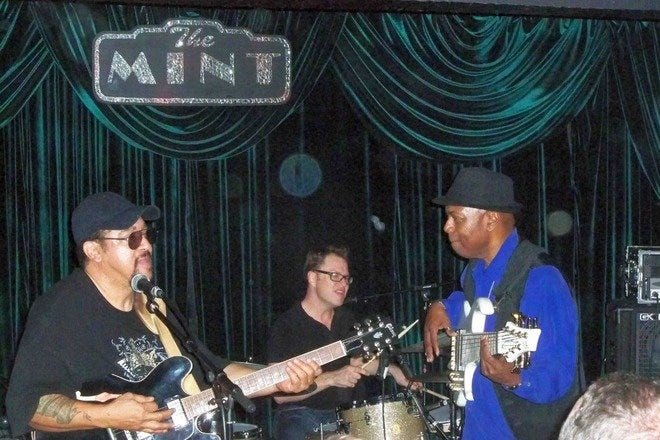 One of L.A.’s classic clubs, The Mint is a little place with a big sound. The music-filled venue has packed them in since 1937, with just a small stage, minute dance floor and long, convivial bar and booths. You can grab a bite to eat in the back, but why not join the crowd right up front as you boogie down to bands ranging from New Orleans favorites like Trombone Shorty, Marcia Ball and Rebirth Brass Band to brand-new up-and-coming groups. Plus, you never know who might turn up on stage here; everyone from Stevie Wonder and Justin Timberlake to Bonnie Raitt and Tom Jones have graced this classic joint. And it is real music, no canned electronics â” everyone is actually playing instruments and singing here!

Recommended for Best Nightlife because: A staple of live music since 1937, The Mint is always jammin’ with rock, funk and alternative bands, seven nights a week.

Jenny’s expert tip: Reserve tickets ahead of time online for your favorite live acts, as The Mint is a small venue that regularly sells out.

Read more about The Mint →